OAKLAND A's ARE TEAM TO BEAT IN BASEBALL PLAYOFFS 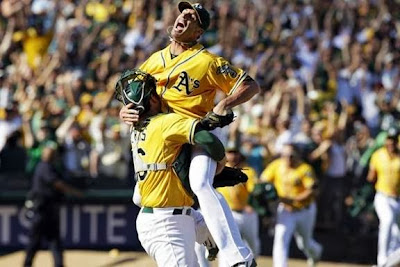 The one team any post season American league team does not want to meet in the upcoming payoffs is the Oakland A's ~ for this audacious group of over-achievers has set the San Francisco East Bay on fire with their balanced hitting, home runs, effective pitching and savvy 2012 American League manager of the year, Bob Melvin. But it's their obvious infectious joy and delight of just playing baseball together as a team that has captured my heart as well as the East Bay: Allen L Roland

I see great things in baseball. It's our game ~ the American game: Walt Whitman

I grew up loving baseball and played it through High School and College until I joined the Navy and became a Navy aviator in 1957. In my early childhood the Boston Red Sox were my team but that passion switched to the New York Giants when Bobby Thompson hit the homerun shot heard round the world to beat the Brooklyn Dodgers in 1951.
Here is that moment frozen in time ~ this treasured memory was indelibly implanted in my young mind for it was etched in total joy and delight ~ forever associated with the late Bobby Thomson who died three years ago.  http://www.youtube.com/watch?v=lrI7dVj90zs

I remained a Giant fan when they moved to San Francisco in 1958 while I was stationed as a carrier fighter pilot in Alameda, California and stayed an avid Giant fan for the next 54 years which included their recent two world championships.
In late 2012, I moved to the East Bay and within 9 months this life time Giant fan became an avid Oakland A's fan. This rambunctious group of baseball players have captured not only my heart but the true spirit and fun of baseball ~ as seen in my July 15th, 2013 post picking the Oakland A's as the team to beat in the American League. See article ~
http://www.veteranstoday.com/2013/07/15/spirited-oakland-as-are-team-to-beat-in-american-league/

Now it's mid-September and the A's have just clinched the American League west for the second straight year. With a comparatively paltry team payroll salary of $ 68 million (compared to Boston's $159 million and Detroit's $149 million) ~ the Oakland A's obviously play for the love of the game, not just the money, and it shows on the field. This is a team that plays hard but has fun and their fans as well as management obviously revel in their antics ~ see this series of 30 second YouTube ads that endear the A's to their fans.
https://www.youtube.com/watch?v=_2Vf0VQKanU&list=PLXLpWAIrf3e-7bDExP_EemvGbubAgpnY6

At their dilapidated and rusting Oakland-Alameda County Coliseum home, with its leaky sewage problems, you enter a wild scene of constant rap music and drums with giant green and gold flags being waved from the upper deck ~ it's a party scene of unbridled joy and the players revel in it. See How You Like Me Now ~ 2 minute video https://www.youtube.com/watch?v=xCFBeL8m-Vk

2012 MLB Executive of the year General Manager Billy Beane has assembled a tightly knit group of switch hitters, power hitters (most home runs of any major league team since all-star game) and solid pitching anchored by the crafty veteran Bartolo Colon and ably supported by Parker, Gray, Milone, Straily and their closers ~ Cook, Doolittle, Blevins and Balfour. Beane and manager Bob Melvin have a solid personal and working relationship and it shows ~ the A's above all are a tightly knit team and every player knows and willingly accepts his role.

Coco Crisp (22 home runs) is their inspirational leadoff hitter and Josh Donaldson, their rock solid third baseman, is their MVP ~ then there's the budding superstar Yoenis Cespedes (.491 SLG ) and a cast of speedy and switch hitting role players ( Moss, Reddick, Young, Suzuki, Norris, Callaspo, Lowrie, Barton, Sogard and Vogt ) who are all capable of hitting the long ball.

The most important factor going into the playoffs is momentum and no team has more solid momentum and is having more fun since the all-star break than the Oakland A's.

Whoever they face in the World Series, the A's will have the home field advantage because the American League won the All Star game this year ~ quite unfair but that's another story.

Roger Angell (Agincourt and After, Five Seasons) perfectly captures my feelings about being a deeply caring baseball fan ~ " It is foolish and childish, on the face of it, to affiliate ourselves with anything so insignificant and patently contrived and commercially exploitive as a professional sports team, and the amused superiority and icy scorn that the non-fan directs at the sports nut (I know this look ~ I know it by heart) is understandable and almost unanswerable. Almost. What is left out of this calculation, it seems to me, is the business of caring ~ caring deeply and passionately, really caring ~ which is a capacity or an emotion that has almost gone out of our lives. And so it seems possible that we have come to a time when it no longer matters so much what the caring is about, how frail or foolish is the object of that concern, as long as the feeling itself can be saved. Naiveté ~ the infantile and ignoble joy that sends a grown man or woman to dancing and shouting with joy in the middle of the night over the hap hazardous flight of a distant ball ~seems a small price to pay for such a gift."
Amen!