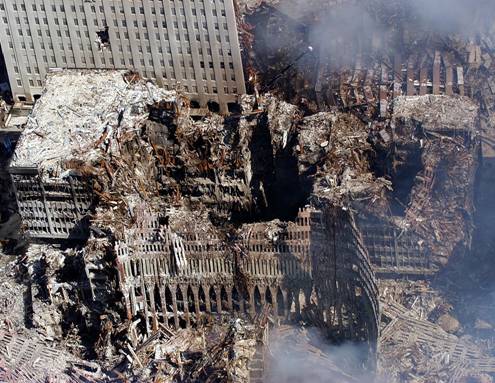 An aerial view on September 17th, 2001 shows only a small portion of the scene where the World Trade Center collapsed following the supposed Sept. 11 terrorist attack. Surrounding buildings were obviously heavily damaged by the scattered debris and massive force of the imploding twin towers ~ before DOJ head and future Director of Homeland Security, Michael Chertoff retained and destroyed all the evidence from this clearly evident, but never declared crime scene. (U.S. Navy photo by Chief Photographer's Mate Eric J. Tilford)

As the Syrian guns of war propaganda heats up, driven by a severely discredited Congress which enjoys an approval rating of less than 15% ~ the clearly anti Syrian intervention American public (90% against) finds itself once again ignored and obviously lied to, coerced and manipulated by the Obama administration's imperialistic agenda which is determined to have its way ~ and all of this set against the 12th anniversary backdrop of the Bush/Cheney administration's mother of all lies ~ the 9/11 official story: Allen L Roland

Propaganda is to a democracy what the bludgeon is to a totalitarian state." -  Noam Chomsky

It was Carl Sagan who once wrote “One of the saddest lessons of history is this: If we’ve been bamboozled long enough, we tend to reject any evidence of the bamboozle. We’re no longer interested in finding out the truth. The bamboozle has captured us. It’s simply too painful to acknowledge, even to ourselves, that we’ve been taken. Once you give a charlatan power over you, you almost never get it back.”

America was bamboozled 12 years ago by the mother of all lies, the official 9/11 story, as perpetuated by the Bush/Cheney administration to the extent that all the subsequent lies seem relatively minor and acceptable ~ and all, including Syria, under the guise of humanitarian regime change. As the executive branch becomes all powerful, Congress becomes a willing accomplice and a charlatan Nobel peace Laureate president Obama willingly ushers in the New World Order.
'Regime Change'  is still the name of the game for the world's only superpower and Obama is beginning to flaunt that uncontested power as reported by the Guardian's Dan Roberts and Dan Ackerman ~   "While stressing that Washington's primary goal remained "limited and proportional" attacks, to degrade Syria's chemical weapons capabilities and deter their future use, the president hinted at a broader long-term mission that may ultimately bring about a change of regime ~ "It also fits into a broader strategy that can bring about over time the kind of strengthening of the opposition and the diplomatic, economic and political pressure required – so that ultimately we have a transition that can bring peace and stability, not only to Syria but to the region,"  Obama told senior members of Congress at a White House meeting on Tuesday. See Guardian article ~ http://www.alternet.org/world/obama-hints-larger-strategy-syria-effort-win-over-republicans?

Just like, I facetiously add, regime change has brought peace and stability to the ongoing nightmares of Iraq, Afghanistan, Libya and nightmare in waiting, Syria.

This "Trust me" attitude by Secretary of State Kerry and President Obama towards the flimsy evidence that Assad and Syria were responsible for chemical attacks on their own people is reminiscent of the charlatans Bush, Cheney, Rice, Tenant and Powell as they pushed their Weapons of Mass Destruction lies and deceptions on the American public with the same "trust me" attitude which masked their obvious goal of Regime Change in Iraq, at any cost. Iraq was an eight year war costing the United States more than a trillion dollars, 4,400 American soldiers dead and the displacement of two million Iraqis.

In the next few days, the Government propaganda drum beat will be hot and heavy with constant references to the 9/11 official story by the administration team to cement their claim that Syria is a threat to our national security ~ regardless of the findings of the UN inspection team.

Where is our George Galloway inspiring the British House of Commons to vote down this unnecessary military preemptive strike and speak the
truth about the events in Syria; 7 Minute video
https://www.youtube.com/watch?v=AgxzpQrqSkg

And if you think the Senate is taking this matter seriously, watch this short video clip of AIPAC operative Wolf Blitzer interviewing gonzo Senator John 'Bomb, Bomb' McCain who was in attendance at that recent congressional hearing on Syria. One minute video http://www.brasschecktv.com/page/24440.html

As VT points out ~ The second largest recipient of AIPAC money from 2006 to 2012 ( $772,327 ) is Arizona Republican Senator John McCain, who has been a champion of Syrian rebels, including the human organ-eating guerrillas of the Jabhat al Nusra, an Al Qaeda-affiliate .. White House intelligence charging Syria for using chemical weapons is solely based on dubious signals intercepts provided by Israel …As such, the White House finds itself relying on the use of obvious propaganda and disinformation to stake its phony claims ~ just like they did in leading up to the illegal and preemptive attack on Iraq in 2003.
John Kerry, in other words, is pulling a Colin Powell and seemingly getting away with it ~ at least in the Senate. 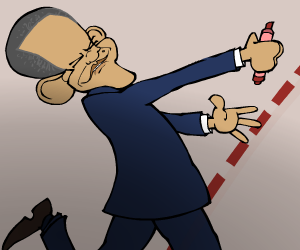 But there are many members of the House who are not buying Obama's red line in the sand as well as the administration's patriotic posturing and subterfuge and predict a resounding defeat for the administration. One of them is Democrat Rep. Alan Grayson of Florida, a leading opponent of the resolution in the House, who eloquently refutes Kerry's arguments and is gathering signatures for a petition calling on Congress to deny permission to attack Syria. See Grayson video interview and sign petition on Democracy Now ~ http://www.democracynow.org/2013/9/5/rep_alan_grayson_on_syria_congress

I most certainly did not trust the constitution shredding Bush/Cheney administration and also do not trust the even more secretive Obama/Biden administration but I defer to ex-CIA analyst Ray McGovern to answer the question of Should we fall again for Trust Me?
" In a dazzling display of chutzpah, the White House is demanding that Congress demonstrate blind trust in a U.S. intelligence establishment headed by James Clapper, a self-confessed perjurer. That’s a lot to ask in seeking approval for a military attack on Syria, a country posing no credible threat to the United States. But with the help of the same corporate media that cheer-led us into war with Iraq, the administration has already largely succeeded in turning public discussion into one that assumes the accuracy of both the intelligence on the apparent Aug. 21 chemical weapons attack in Syria and President Barack Obama’s far-fetched claim that Syria is somehow a threat to the United States. Here we go again with the old political gamesmanship over ”facts” as a prelude to war, a replay of intelligence trickery from Vietnam’s Gulf of Tonkin to Iraq’s nonexistent WMD… Let’s hope that, this time on Syria, at least one or two senior intelligence or policy officials will find a way to get the truth out ~ heeding their own conscience and oath to support and defend the Constitution ~ rather than succumb to the ever-present temptation to give priority to being part of the President’s “team” See Article ~ http://www.veteransnewsnow.com/2013/09/03/227107-should-we-fall-again-for-trust-me/

Which brings me finally to the backdrop mother of all lies, the official 9/11 story which most certainly will be utilized ~ as we approach its 12th anniversary ~ to justify further illegal preemptive and unconstitutional military strikes by an out of control Military, Industrial, Congressional complex which has obviously lost its soul as well as its moral bearings.

Whether you believe the official 9/11 story or see it for what it really is ~ a treasonous hoax and monstrous lie ~ will determine if you are still being bamboozled and remain powerless to the dictates of the corpocracy and global financial elite. President Obama will desperately play that rusty 9/11 card in a nationally televised speech next Tuesday, September 10th in a vain attempt to once again utilize fear to maintain the 9/11 bamboozle, the status quo as well as America's image as the world's most deeply mistrusted and trigger happy policeman.

All Government lies stem from the mother of all lies ~ the 9/11 Official story and it is the litmus test for the survival of our society and Democracy; "Think about what you allow yourself to know ~ Think about what you pass by; ignore, deny and defend that defines you. For it defines the degree of your personal courage, your relationship to the truth, your values, your principles and what you will pass on to your children and everyone you meet. It tells you in that place where your conscience must once have lived whether you are a hypocrite and a fool or whether something greater still lives within you."

Allen L Roland is a practicing psychotherapist, author and lecturer who also shares a daily political and social commentary on his web log and website allenroland.com He also guest hosts a monthly national radio show TRUTHTALK on www.conscioustalk.net
Posted by Allen L Roland, Ph.D at 9:36 PM