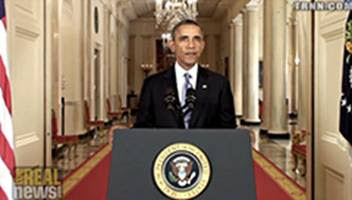 A key paragraph from President Obama's speech on Tuesday night regarding Syria brought a similar impassioned response from all three of these TV interviewees and bears repeating ~ " Terrible things happen across the globe, and it is beyond our means to right every wrong. But when with modest effort and risk we can stop children from being gassed to death and thereby make our own children safer over the long run, I believe we should act. That's what makes America different. That's what makes us exceptional. With humility, but with resolve, let us never lose sight of that essential truth."

Here's some Real News response excerpts as well as the video link from a transcript of the Hedges and Masri interview as moderated by Jaisal Noor, TRNN producer. That's followed by my interview link with Press TV just after Obama's speech.

NOOR: So, Rania, let's start with you. As an activist that's been speaking out against this possible intervention, against U.S. involvement in Syria, what's your response to this speech?

MASRI: It really was what we had expected. I mean, those of us who've been spending time at the Hill and following the news, President Obama's speech was what we had expected. The postponement (of the attack) was expected. And the reason that he postponed it was not only because the Russians provided him with a really strong political way out, a political possibility for chemical weapons deterrence in Syria, but also because he simply didn't have the votes in Congress. Were this to go to the House, it would have failed. It might even have failed in the Senate."

NOOR: And, Chris, I want to pose that question to you. It seems like within the past few weeks and days, this war has become or this possible intervention in Syria has become increasingly unpopular. At least that's how it's been reported in the press. What's your response to his speech and the fact also that he had to delay this vote in Congress?

HEDGES: " Well, Rania is right. He didn't have the votes, so he had no choice. But I think this is really symptomatic of an exhaustion on the part of the American public after 12 years of war, 12 years in Afghanistan, ten years in Iraq. They have seen this scenario before. The clips of atrocities, the appealing to American exceptionalism, the high-blown rhetoric of patriotism. Kerry even trotted out once again World War II, calling this the Munich moment and referring to the graves, Normandy. And none of it worked. It didn't work because at this point people have been lied to so many times. The excuses and propaganda that is pushed forth and has been pushed forth year after year just fall flat. It doesn't work anymore. And I think people understand that when you drop Tomahawk missiles, each Tomahawk missile carries a 1,000-pound iron fragmentation bomb or 166 cluster bombs. And they're talking about dropping hundreds of them…. And let's not forget that internally, we are, like all dying empires, being hollowed out from the inside in terms of infrastructure. I live near Philly, I live in Princeton. The school system is shattered with closings and layoffs. Libraries are being shuttered. Head Start is being cut back. Unemployment benefits are not being extended. You know, we've reached a point of both physical and emotional exhaustion …  And I think what we're really watching is a kind of revulsion at this whole (war)process. And while it may be naïve ~ and I think Rania is correct in saying that it probably is ~ at the same time, it's very, very real. And I think Obama is going to have a very tough time pushing this through, and I think we've really reached a kind of endpoint where we just had enough."

NOOR: And, Rania, I wanted to ask you, as someone who's been speaking out against this, what do you think ~ and as someone who's from the region, what do you think the response will be in the Middle East to the Obama speech? And something you've pointed out is that many Syrians working with the U.S. or working with Saudi Arabia have been proponents of the strike. What's your response?

MASRI: " …. Now, for myself as an Arab American from the region, as somebody who's been working on peace and social justice issues both here in the United States and in Lebanon, I have to say that although President Obama's final conclusion was not surprising, his prelude to it was deeply, deeply offensive, deeply unethical, and a historic for him to sit there and to go on at length about these images of the children that have been gassed ~ and how images of children that have been gassed have moved him to action was just repulsive, because the level of hypocrisy in that statement cannot be tolerated ~ the fact that it is the United States government also under his leadership that have funded and supported the Israeli use of white phosphorus against Palestinians in Gaza, the fact that it is the U.S. government that has themselves directly used white phosphorus against the Iraqis in Fallujah. And it is the toxic legacy of the use of white phosphorus in Iraq that is actually greater than the toxic legacy of both the bombings of Hiroshima and Nagasaki, as report that was published several years ago proved… And I think it's really critical that we poke holes in this. And there is an understanding of amongst a significant segment of the American public that recognizes the lack of credibility the United States has in complaining about chemical weapons when we have not only used chemical weapons, but we're the only country to have used nuclear weapons twice against civilian communities.
But nevertheless, there is this desire that is perpetuated by the mainstream media and accepted by too many Americans that we are exceptional in our morality and in our legitimacy and in our desire to do good. And, unfortunately, the words of Martin Luther King still hold true today. The United States does remain the greatest purveyor of violence in the world."

But Masri was not done with her scathing critique ~ "As for the quotes that you highlighted from President Obama, again, I mean, they're ahistoric. They're extraordinarily naive. And I long for the day when the vast majority of Americans will recognize the fallacies in those statements. We can only be exceptional as a country if we truly live according to the values of our constitution, all our constitution, inclusive of the amendments, of course, and recognize that exceptionalism can only be obtained through morality, through legality, through legitimacy, and not through hypocrisy and not through violence…. So in no way, shape, or form have we been a global anchor for security. I long for the day when we may be become that. But I believe we will only become that if, again, we remember the words of Martin Luther King, who recognized that this country continues to suffer from the vices of militarism, materialism, and racism."

And here's my five minute late hour interview with Press TV, approximately one hour after Obama's speech, and like Hedges and Masri ~ I don't mince words regarding my feelings about Obama's words particularly on the eve of the hypocrisy surrounding the 12th anniversary of the fictitious 9/11 official story.
https://www.youtube.com/watch?v=tv2wbvvvMng

"The idea of democracy has been stripped of its moral imperatives and has come to denote hollowness and hypocrisy."
Paul Wellstone