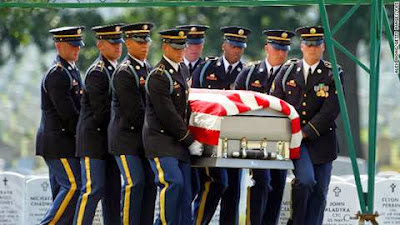 A recent VA study revealed that nearly one in five suicides nationally is a veteran even though veterans only make up 10% of the population but the reporting states only represented about 40% of the U.S. population ~ and did not include the two largest states California and Texas as well as Illinois: Allen L Roland

Supposedly every day in the United States at least 22 veterans commit suicide but this stark figure is obviously a low ball number because three of the largest states did not  make data available to the VA for this report, according to Mori Basu of CNN.com.
http://www.cnn.com/2013/09/21/us/22-veteran-suicides-a-day/index.html

Excerpt: " Luana Ritch, the veterans and military families coordinator in Nevada, helped publish an extensive report on that state's veteran suicides. Part of the problem, she says, is that there is no uniform reporting system for deaths in America. It's usually up to a funeral director or a coroner to enter veteran status and suicide on a death certificate. Veteran status is a single question on the death report, and there is no verification of it from the Defense Department or the VA. "Birth and death certificates are only as good as the information that is entered," Ritch says. "There is under reporting. How much, I don't know."

At least 30% of all veterans have considered suicide ~ another lowball figure which would most certainly be supported by my own extensive heart centered work with combat veterans with PTSD whereas the vast majority have considered suicide particularly when racism issues were involved or psychotropic drugs. Remember, It is estimated that at least half of all Americans who commit suicide or commit violent acts were on psychiatric drugs and there are more than 3000 deaths a month attributed to psychiatric or psychotropic drugs. Read my report ~ http://www.veteranstoday.com/2012/12/17/true-source-of-random-shootings-and-violence-is-often-psychotropic-drugs/. 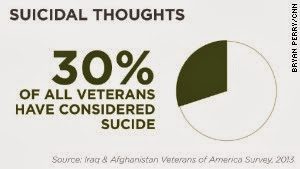 If a veteran intentionally crashes a car or dies of a drug overdose and leaves no note, that death may not be counted as suicide.

An investigation by the Austin American-Statesman newspaper last year revealed an alarmingly high percentage of veterans who died in this manner in Texas, a state that did not send in data for the VA report.
"It's very hard to capture that information," says Barbara van Dahlen, a psychologist who founded Give an Hour, a nonprofit group that pairs volunteer mental-health professionals with combat veterans.

The VA report itself acknowledged "significant limitations" of the available data and identified flaws in its report. "The ability of death certificates to fully capture female veterans was particularly low; only 67% of true female veterans were identified. Younger or unmarried veterans and those with lower levels of education were also more likely to be missed on the death certificate."

"There's probably a tidal wave of suicides coming," says Brian Kinsella, an Iraq war veteran who started Stop Soldier Suicide, a nonprofit group that works to raise awareness of suicide. Between October 2006 and June 2013, the Veterans Crisis Line received more than 890,000 calls. That number does not include chats and texts.

VA Secretary Eric Shinseki requested collaboration from all 50 states to improve timeliness and accuracy of suicide reporting, key to improving suicide prevention. At the time the VA released its last suicide report and at least 11 states had not made a decision on data collaboration.
There is a solution as I have clearly demonstrated over the past three years with my Heart centered Healing The Wounded heart transformation (Band of Brothers) workshops for combat veterans with PTSD. In many of the Combat Veterans with PTSD I have worked with ~ a light has literally gone out within them and most have contemplated if not attempted suicide at one time or another. You can imagine the satisfaction of watching that light come back on when their hearts are jump started through gratefulness and heart centered counseling. See article ~ http://www.veteranstoday.com/2012/08/14/band-of-brothers-10-connection-and-self-healing/

I have long felt and have now proved that PTSD is quite often Post Traumatic Heart Disorder for a common symptom of Post-Traumatic Stress Disorder is the inability to give or receive love ~ which can obviously apply to non-veterans who have also suffered significant loss or emotional childhood and/or adult psychic pain.

I have also clearly demonstrated that only after the heart is touched, through gratefulness and accountability, can true self-healing occur for only then does the client (veterans or otherwise) truly want to heal.  Using the premise that what is deepest within us is love (not anger) and utilizing an action oriented approach to face and go through their heart felt fears ~ these veterans, soon discover that beneath their pain, anger and shame is not only love and joy but most importantly their true authentic self.

In addition, a new SFVA study strongly suggests that soldiers who experience killing experiences are twice as likely to attempt suicide ~ which strongly supports the reality of soul damage as a contributing factor for veteran’s suicide as well as the obvious need for a proven heart centered approach toward veteran rehabilitation.  See my report ~ http://www.veteranstoday.com/2012/04/25/rising-vets-suicides-heart-centered-approach-needed/ 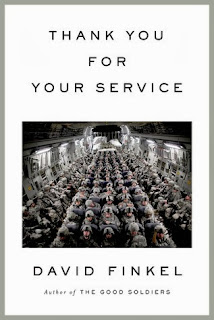 My point about combat veteran's ongoing battle with suicide is dramatically made in David Finkel's recently published book Thank You For Your Service. As Michiko Kukutani superbly writes in the New York Times ~
"The central story line in “Thank You for Your Service” belongs to a soldier named Adam Schumann (whom we first met in “The Good Soldiers”) leaving his third deployment in Iraq in “a mental health evacuation.” He’d gone there, a gung-ho guy, thinking he had “a front seat to the greatest movie I’ve ever seen in my life,” and remembered thinking once that getting shot at in a firefight was “the sexiest feeling there is.”
Mr. Schumann became a great soldier ~ the “smart, decent, honorable” one, the one everyone relied on, the one with the sharpest eyes, who could find the hidden roadside bombs ~ but he left Iraq a broken man. Terrible, bloody images play on an endless loop in his head: carrying his friend Emory, who’s been shot in the head, draped across his back; his pal Doster, “being shredded again and again by a roadside bomb on a mission Adam was supposed to have been on, too.” Despite all the psychiatrists and therapists he’s talked to, Mr. Schumann finds himself thinking about suicide more and more often."  See review ~ http://www.nytimes.com/2013/10/01/books/thank-you-for-your-service-by-david-finkel.html?nl=todaysheadlines&emc=edit_th_20131001

The VA of course refuses to acknowledge the cost effectiveness of a heart centered approach to Veteran rehabilitation but they cannot hide the obvious possibility that approximately 50 veterans, throughout the U.S take their lives every day because they have no choice versus psychotropic drugs, spirit numbing warehousing and the well-known VA inability to introduce a proven source related heart centered approach to veteran rehabilitation versus relying on a outdated symptom related and drug centered clinical approach.

Of course, the sad realization, that many of these vets deeply feel, is that they have been fighting for principles and lies that extend from Vietnam to Iraq and Afghanistan ~ but the principal liars have yet to be exposed and prosecuted.