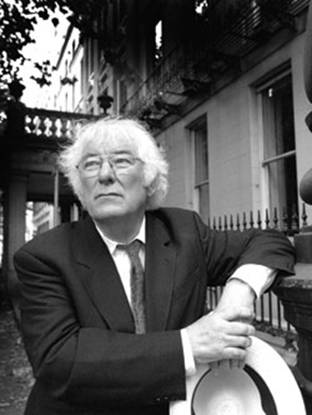 Poetry is the bridge between the mind and the heart where feelings become words and none was more accomplished at that gift than Dublin's Seamus Heaney ~ the Irish poet, playwright, translator and lecturer, and the recipient of the 1995 Nobel Prize in Literature. His light will be missed in the gathering darkness of our present times: Allen L Roland

As a writer, columnist and amateur poet, I recognize and relish the power of poetry and the emotional impact of putting feelings into words but it is implicit in Seamus Heaney's view of poetry ~  "poetry as divination, poetry as revelation of the self to the self, as restoration of the culture to itself; poems as elements of continuity, with the aura and authenticity of archaeological finds, where the buried shard has an importance that is not diminished by the importance of the buried city; poetry as a dig, a dig for finds that end up being plants. ‘Digging’, in fact, was the name of the first poem I wrote where I thought my feelings had got into words, or to put it more accurately, where I thought my feel had got into words. Its rhythms and noises still please me, although there are a couple of lines in it that have more of the theatricality of the gunslinger than the self-absorption of the digger. I wrote it in the summer of 1964, almost two years after I had begun to ‘dabble in verses’. This was the first place where I felt I had done more than make an arrangement of words: I felt that I had let down a shaft into real life. The facts and surfaces of the thing were true, but more important, the excitement that came from naming them gave me a kind of insouciance and a kind of confidence. I didn’t care who thought what about it: somehow, it had surprised me by coming out with a stance and an idea that I would stand over"
Preoccupations: Selected Prose, 1968-1978 (London: Faber & Faber, 1980), 41-60

"Between my finger and my thumb
The squat pen rests; snug as a gun.

Under my window, a clean rasping sound
When the spade sinks into gravelly ground:
My father, digging. I look down

Till his straining rump among the flowerbeds
Bends low, comes up twenty years away
Stooping in rhythm through potato drills
Where he was digging.

The coarse boot nestled on the lug, the shaft
Against the inside knee was levered firmly.
He rooted out tall tops, buried the bright edge deep
To scatter new potatoes that we picked,
Loving their cool hardness in our hands.
By God, the old man could handle a spade.
Just like his old man.

My grandfather cut more turf in a day
Than any other man on Toner's bog.
Once I carried him milk in a bottle
Corked sloppily with paper. He straightened up
To drink it, then fell to right away
Nicking and slicing neatly, heaving sods
Over his shoulder, going down and down
For the good turf. Digging.

The cold smell of potato mould, the squelch and slap
Of soggy peat, the curt cuts of an edge
Through living roots awaken in my head.
But I've no spade to follow men like them.

Between my finger and my thumb
The squat pen rests.
I'll dig with it."

And dig with it, he did ~ here's a two minute video of Seamus reading one of his early poems, Scaffolding on his 70th birthday. 2 minute video   https://www.youtube.com/watch?v=fNYBwF7lKLA

Here’s Heaney's poem about a budding young love where he perfectly captures the feelings of youthful anticipation and excitement of an early evening walk together by the river.

"Her scarf a la Bardot,
In suede flats for the walk,
She came with me one evening
For air and friendly talk.
We crossed the quiet river,
Took the embankment walk.

Traffic holding its breath,
Sky a tense diaphragm:
Dusk hung like a backcloth
That shook where a swan swam,
Tremulous as a hawk
Hanging deadly, calm.

A vacuum of need
Collapsed each hunting heart
But tremulously we held
As hawk and prey apart,
Preserved classic decorum,
Deployed our talk with art.

Our Juvenilia
Had taught us both to wait,
Not to publish feeling
And regret it all too late -
Mushroom loves already
Had puffed and burst in hate.

So, chary and excited,
As a thrush linked on a hawk,
We thrilled to the March twilight
With nervous childish talk:
Still waters running deep
Along the embankment walk."

As Margalit Fox writes in the New York Times ~ " Throughout his work, Mr. Heaney was consumed with morality. In his hands, a peat bog is not merely an emblematic feature of the Irish landscape; it is also a spiritual quagmire, evoking the deep ethical conundrums that have long pervaded the place ~ “Yeats, despite being quite well known, despite his public role, actually didn’t have anything like the celebrity or, frankly, the ability to touch the people in the way that Seamus did,” Mr. Muldoon, a winner of the Pulitzer Prize and the poetry editor at The New Yorker, said in an interview on Friday. “It was almost like he was indistinguishable from the country. He was like a rock star who also happened to be a poet.”    See times article ~ http://www.nytimes.com/2013/08/31/arts/seamus-heaney-acclaimed-irish-poet-dies-at-74.html?emc=eta1&_r=0

In his 1995 Nobel acceptance speech, Seamus Heaney said that he prized the sort of poem that provides not just “a surprising variation played upon the world,” but “a retuning of the world itself” ~ delivering a visceral surprise, “like the impatient thump which unexpectedly restores the picture to the television set, or the electric shock which sets the fibrillating heart back to its proper rhythm.”

And Seamus Heaney has indeed, in this time of gathering darkness, caught many of our hearts off guard and brought them back to their proper rhythm ~ as seen in this prophetic poem.

"And some time make the time to drive out west
Into County Clare, along the Flaggy Shore,
In September or October, when the wind
And the light are working off each other
So that the ocean on one side is wild
With foam and glitter, and inland among stones
The surface of a slate-grey lake is lit
By the earthed lightening of flock of swans,
Their feathers roughed and ruffling, white on white,
Their fully-grown headstrong-looking heads
Tucked or cresting or busy underwater.
Useless to think you'll park or capture it
More thoroughly. You are neither here nor there,
A hurry through which known and strange things pass
As big soft buffetings come at the car sideways
And catch the heart off guard and blow it open."
In "Station Island " Heaney, through the eyes of the ghost of James Joyce, offers some important advice for writers and poets to write for the joy of it ~
“... Keep at a tangent.
When they make the circle wide, it’s time to swim
out on your own and fill the element
with signatures on your own frequency,
echo soundings, searches, probes, allurements,
elver-gleams in the dark of the whole sea.”

The important point here is that Nobel Laureate Seamus Heaney not only saw through different eyes but he also had the courage to dig for and share what he discovered through his poetic heart.

The Robin doesn't sing because its happy, its happy because it sings.