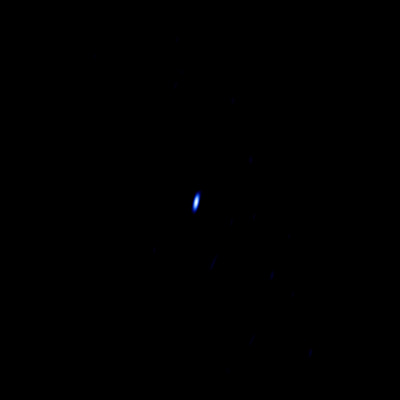 As Voyager 1 escapes our star solar system and enters the uncharted black void of interstellar space, it carries a non-threatening message to the millions of solar neighbors in our Milky Way galaxy and thanks to Carl Sagan, it's a message of love, altruism and social cooperation which just so happens to be the driving force of evolution: Allen L Roland

And according to the best estimates of astronomers there are at least one hundred billion galaxies in the observable universe ~ which means if you hold up a grain of sand, the patch of sky it covers probably contains at least 10,000 galaxies.

On September 12, 2013, NASA announced that Voyager 1 had crossed the heliopause and entered interstellar space on August 25, 2012, making it the first manmade object to do so and it only has enough power for its instruments until 2025. In 2025 all instruments will be turned off, and the science team will be able to operate the spacecraft for about 10 years after that to just get engineering data. In the year 40,272 AD, Voyager 1 will come within 1.7 light years of an obscure star in the constellation Ursa Minor (the Little Bear or Little Dipper) called AC+79 3888.  It will then swing around that star and orbit about the center of our Milky Way, likely for millions of years.
Read more: http://www.universetoday.com/104717/its-official-voyager-1-is-now-in-interstellar-space/#ixzz2ev8PXDhw

In other words, the star closest to our own solar system, is 4.37 light years away, so Voyager 1 would still take over 50,000 years to get there, but it's headed in the right direction. 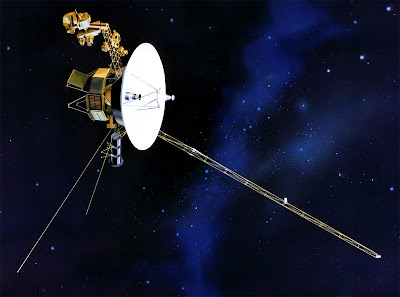 As I wrote on June 4, 2011 ~ thirty-three years into its voyage into deep space, the space-hardened craft of Voyager 1 had neared a milestone in its journey out of the solar system. But within this small craft is a gold plated copper record disc with 115 images and natural sounds of nature as well as songs of celebration and greetings from a small pale dot in the vast black void of our solar system called planet Earth. http://www.veteranstoday.com/2011/06/05/voyager-1-at-edge-of-deep-space-with-its-message/

But what if a deep space intergalactic space probe intercepted Voyager 1 ~ similar to the one I facetiously reported on March 25, 2012, where they reported the following on observing Earth;  "This is our fifth and perhaps final visit to this strange planet Earth and it would appear that they are still in denial of the universal urge to unite ~ although there are still small pockets of individuals and groups who strongly believe and are sharing this universal truth on a worldwide communication system called the Internet ~ Perhaps there is still hope ~ and in that spirit we landed one of our officers in a place called Kansas ~ to speak to a human and inquire about their government ~ since they are now in the midst of a so called presidential election. Here is the nine minute interview with an Earthling who apparently has very little real knowledge of his government and appears to be in a before mentioned languid state of apathy."  9 minute video ~ Earthling explaining his Government http://www.informationclearinghouse.info/article30838.htm


Recommendation: " I suggest that we do make limited contact, perhaps with those few enlightened individuals I spoke of. These power and ego crazed Earthlings must soon begin to realize how insignificant they truly are in the galaxy and Monte Python’s Galaxy Song could be that needed reminder. For the only thing that individually and collectively connects them to this vast incomprehensible galactic universe is quite simply, LOVE."  3 Minute Video / Monte Python’s Galaxy Song. http://www.informationclearinghouse.info/article30842.htm

So now it's time again for the before mentioned fictitious Commander Luyorxinw, en route on his sixth intergalactic probe to visit and understand our strange and war-like planet, to intercept and corral Voyager 1 as it leaves our solar system, but this time he gets a new view of our planet as seen through the eyes of Carl Sagan and his team ~ and it's all recorded on a 12 inch gold plated copper disc stored within Voyager which also includes a needle to play it. 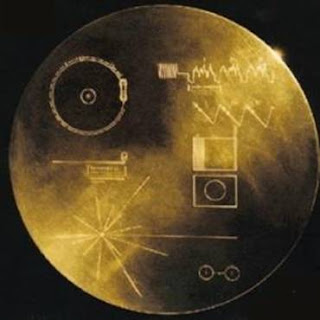 The contents of the record were selected for NASA by a committee chaired by Carl Sagan of Cornell University. As mentioned, Sagan and his associates assembled 115 images and a variety of natural sounds, such as those made by surf, wind and thunder, birds, whales, and other animals. To this they added musical selections from different cultures and eras, and spoken greetings from Earth-people in 55 languages, along with printed messages from President Jimmy Carter and U.N. Secretary General Kurt Waldheim.

So imagine Commander Luyorxinw and his crew's surprise, after observing for five years (on their annual probes) the constant strife and turmoil of planet earth, when they hear the first strains of Beethoven's String Quartet No. 13 in B Flat.   6 minute video
http://www.youtube.com/watch?feature=player_embedded&v=Znku4XfHd2U

As Megan Garber explains in The Atlantic ~ " The logic of all this is simple: It will be tens of thousands of years (if ever) before either Voyager can make a close approach to any planetary system that lies beyond our own. "The spacecraft," Carl Sagan put it, "will be encountered and the record played only if there are advanced spacefaring civilizations in interstellar space."
Sagan added: "But the launching of this bottle into the cosmic ocean says something very hopeful about life on this planet."
See Atlantic article ~  http://www.theatlantic.com/technology/archive/2013/09/the-message-voyager-1-carries-for-alien-civilizations/279662/

Perhaps William Blake had it right when he wrote ~ We are put on Earth a little space to bear the beams of love. For love is the only force capable of joining us instantly to everything we can see around us since it’s a state of consciousness that exists beyond time and space as well as deepest within each one of us. I knew that as a very young child when I leaned out my window in Newtonville, Massachusetts, filled with love and with my favorite music filling the room, and 'knew' in that instant that I was connected to everything I saw through that same love, joy and delight.

Indeed, Voyager 1 is a cosmic note in a bottle on an immense interstellar sea from a lost and alone planet Earth that has little if any idea that it is instantly connected to all of this vastness through a Unified Field of love and soul consciousness ~ which exists not only beyond time and space but also deepest within each one of us and whose principle property is the universal urge to unite.

We shall not cease from exploration And the end of all our exploring Will be to arrive where we started And know it for the first time: T.S. Eliot