WALL STREET REJOICES AS MAIN STREET CRIES ~ WHERE ARE THE JOBS? 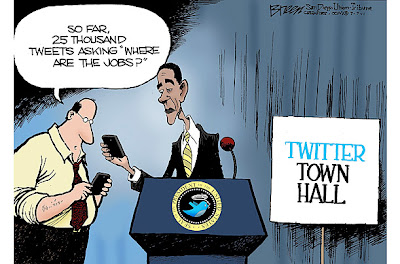 While the Wall Street bought Republicans and Democrats continue their Kabuki theater over the debt ceiling foolishness in Washington. Main Street continues to darken as over 25 million Americans are either unemployed, underemployed or have dropped out of the labor force in a politically unacknowledged depression where one in 46 homes are in foreclosure: Allen L Roland

According to Newsweek, close to 20 percent of all American men between the ages of 25 and 54 do not have a job at the moment and this fact is continually ignored by the Obama administration as well as Congress. On top of that, the housing market is still depressed after home prices began to tumble in 2007 and now over 11 million homes in American are vacant and one out of every 46 homes is in foreclosure.

As Paul Krugman, NY Times wrote on July 21 (The Lesser Depression) ~ “The disappearance of unemployment from elite policy discourse and its replacement by deficit panic has been truly remarkable. It’s not a response to public opinion. In a recent CBS News/New York Times poll, 53 percent of the public named the economy and jobs as the most important problem we face, while only 7 percent named the deficit. Nor is it a response to market pressure. Interest rates on U.S. debt remain near historic lows.”

And as Paul Craig Roberts writes: "The US economy is driven by consumer demand, but with 22.3% unemployment, stagnant and declining wages and salaries, and consumer debt burdens so high that consumers cannot borrow to spend, there is nothing to drive the economy.

This is the best graphic I've seen regarding unemployment in the United States ~ and this doesn’t even include the underemployed or those have dropped out of the labor force which would make it over 16% ~ or over 20% if you factor in youth who are unable to enter the workforce or those job holders who have taken early retirement. Watch this shocking 30 second geographic graphic of a recession becoming a depression ~ county by county from January 2007 to February 2011. Click here ~
http://www.latoyaegwuekwe.com/geographyofarecession.html

Mind boggling isn’t it ~ when you graphically see where we REALLY are pursuant to unemployment. Let’s make it clear ~ we are not in a recovery ( as Ben Bernanke obliviously states ) or a “painfully slow“ recovery ( as President Obama often says ) Try telling that to the close to 100 million Americans who are effectively caught in poverty (using far more realistic measures than the government does) or the 6.5 million households with mortgages that are delinquent or in foreclosure ~ or the millions of Seniors whose monthly Social Security check has become their only means of economic survival.

Government figures show the economy grew at a weak pace of 1.3% in the second quarter and a revised 0.4% pace in the first quarter ~ confirming a stagnating recession which is rapidly becoming a depression. Economist Justin Wolfers of the University of Pennsylvania’s Wharton School of Economics correctly said he thinks there’s a 40% chance the economy has already been in a major recession for the past four months ~ a fact the current administration still refuses to acknowledge with a national election fast approaching.

It appears the Obama administration, like the Bush administration, is still committed to bailing out Wall Street in a vain attempt to re-inflate the same credit/debt bubble that burst in 2008 ~ but most Americans have barely enough money to survive and are crushed with personal debt.

Sy Harding , StreetSmartPost, summed up yesterday how Washington still fiddles while the economy continues to burn ~ “While media focus has been almost entirely on the short-term debt ceiling foolishness in Washington, not much attention has been paid to the more serious worsening of the six-month recessionary trend in the economy…The consensus forecast of economists and the Fed was that under the influence of QE2 stimulus, growth would improve to 3.5% in the March quarter and for the rest of the year, with the economy’s underpinnings improving so it could stand on its own when QE2 expired in June. Instead, March quarter GDP growth declined to only 1.9%. Economists and the Fed were sure that was only temporary and left their forecasts for the June quarter and rest of the year at 3.2% growth. Continuing negative economic reports in May and June forced them to scramble to lower their June quarter growth forecasts dramatically, to 2.8%, 2.6%, 2.0%, and finally to 1.8%....Meanwhile, small businesses account for most of the jobs in the U.S., and the National Federation of Independent Businesses (NFIB) reported last week that its Small-Business Optimism Index dropped in June for the fourth straight month, and “is solidly in recession territory.” That does not bode well for an improvement in the jobs picture going forward.”

So as Washington continues its kabuki theater regarding the debt ceiling crisis ~ Sy reminds us that raising the debt ceiling will not change what is already happening in the economy and will most likely will worsen a deteriorating economy ~ “An agreement to raise the debt ceiling would likely include long-term government spending cuts, basically a withdrawal of the stimulus that a high level of government spending has been providing to the economy. And failure to raise the debt limit would create serious problems for the U.S. in global financial markets, and raise interest rates in the U.S. ~ both of which would be serious additional negatives for the economy.”

It’s time to face reality and finally get beyond the lies and misinformation that caused and perpetuate our current economic crisis by recognizing that we are in a deepening recession, we’re broke and millions of Americans want truthful answers and jobs ~ not lies, hype and theater.

Congress is now on a path to do exactly what the American people don't want. Americans want shared sacrifice in deficit reduction. Congress is on track to give them the exact opposite: major cuts in the most important programs that the middle class needs and wants, and no sacrifice from the wealthy and the powerful. Is it any wonder, therefore, that the American people are so angry with what's going on in Washington? I am too: Senator Bernie Sanders / Vermont