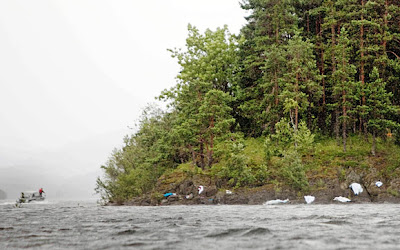 A search and rescue team boat passes by covered bodies of victims from the youth summer camp organized by the ruling Labor Party on Utoeya, an island outside the capital, Oslo. (Kristoffer Oeverli Andersen/AFP/Getty Images / July 23, 2011)

The Norway targeted massacre of over 92 youth and adults on July 22, 2011 is a symbol and wake up call to the world of the deadly consequences of the hate filled politics of right-wing Zionism and Islamophobia: Allen L Roland

Imagine yourself on this idyllic summer island in Norway ~ a thin, 500-yard strip of land in a gray lake in the Norwegian woods and a short distance from Oslo ~ having heard of an Oslo bombing and trying to get information on who was hurt. Most of the 600 campers, many from political families, had gathered in the main assembly building for a briefing on the bombing in Oslo ~ for relatives of many of the youths worked in the vicinity of the blast. Imagine your relief when you see a man dressed in police garb arrive on the Island ~ perhaps he has information for us, they must have thought …

And then he started shooting ~

As David Jolly, NY Times, wrote yesterday ~ “As soon as the shooting started, people panicked, witnesses said, running in all directions, tumbling down the island’s rocky hill in an attempt to reach the sea. Even after many made it into the water, the gunman calmly and methodically shot at those who were swimming.

“People right behind me were shot,” said Helen Andreassen, 21, a political adviser for the Labor Party’s youth wing. “I heard shots right behind me. He was standing just by the water, using his rifle, just taking his time, aiming and shooting. It was a slaughter of young children.”

Witnesses said the attacker wore a police uniform, which allowed him to deceive his victims as they desperately sought help. At one point, the gunman emerged from the forest and persuaded several youths who had sought refuge on the shore to come to him, said Stine Renate Haaheim, 27, a member of Parliament with the Labor Party, who was also among those hiding ~ and then he opened fire.”

Witnesses have said that those who feigned being dead, in order to escape the carnage, were shot in the head by the assailant who obviously wanted no one to survive his methodical murders.

Shocked? You should be!

This is an obvious statement of the deadly potential consequences when hate filled right wing Zionism is mixed with Islamophobia ~ for it was in fact an anti-Muslim zealot, Anders Behring Breivik, who committed the murders. A right-wing fundamentalist with a hatred for Norway's left, multiculturalism and Muslims. It still remains to be seen if this was a carefully planned psyops with other shooters involved.

As Alex Kane, writes in AlterNet, “An examination of Breivik's views, and his support for far-right European political movements, makes it clear that only by interrogating the nexus of Islamophobia and right-wing Zionism can one understand the political beliefs behind the terrorist attack. Breivik is apparently an avid fan of U.S.-based anti-Muslim activists such as Pamela Geller, Robert Spencer and Daniel Pipes, and has repeatedly professed his ardent support for Israel “

In light of Norway’s strong support of Palestinian statehood, as well as the boycotting of some Israeli commerce, it’s not a surprise that this malicious attack exposed, as Kane writes ~ “ the dangerous nexus of Islamophobia, neo-conservatism and right-wing Zionism, and what could happen when the wrong person subscribes to those toxic beliefs.”

In other words, Anti-Muslim activists and right-wing Zionists share a political narrative that the Israeli/Palestinian conflict is a "clash of civilizations," one in which Judeo-Christian culture is under attack by Islam.

Could this monstrous act also have something to do with the fact that the day before the attack the Norwegian children at the camp held a BOYCOTT ISRAEL rally?

That two days prior to the attack ~ AUF’s (Labour Party's youth movement) leader Eskil Pedersen gave an interview to the Dagbladet, Norway's second largest tabloid newspaper, in which he revealed what he thinks of Israel ~ stating that he “believes the time has come for more drastic measures against Israel, and (that he) wants the Foreign Minister to impose an economic boycott against the country.”

Pederson went on to say, “The peace process goes nowhere, and though the whole world expect Israel to comply, they do not. We in Labour Youth will have a unilateral economic embargo of Israel from the Norwegian side.”

The main stream press will probably ignore an obvious motive for this terrorist act in that Norway planned to support a Palestinian state, was actively divesting itself of Israeli stocks and was pulling itself out of the Libyan invasion.

As Kane writes ~ “Why Breivik, and his accomplices if he had any, would attack young Norwegians remains unclear. But it probably had something to do with Breivik's belief that European governments, and the Norwegian government, were run by "Marxists" allied with Islamist extremists who were bent on destroying Europe through "multiculturalism."

There also appears to be a wealth of growing evidence to suggest that the perpetrator of this atrocity, even if it turns out he was acting alone, was very much part of a political movement ~ a movement whose leading ideologues regularly appear on Fox News and have high public profiles.

Matthew Goodwin, Guardian UK, correctly wrote today that ~ “the tragedy in Norway this weekend may prove to be a watershed moment in terms of how we approach far-right followers, groups and their ideology. Until now, European democracies and their security services had focused almost exclusively on the threat from al-Qaida -inspired terrorism. Right wing extremist groups and their more violent affiliates were dismissed as a disorganized, fragmented and irrelevant movement.”

To me, it certainly would appear that this is an attack on the nation of Norway for daring to assert itself in international politics ~ for daring to speak out against murder and genocide particularly as it relates to the Palestinians. Is this what Mr. Stoltenberg, the Norwegian Prime Minister, was referring to when he said: "No One will bomb us into silence. No One will ever shoot us into silence. No one will ever scare us away from being Norwegians."

The dye is cast ~ the flames of fear and hate filled politics are burning brightly throughout the world and the Norway massacre is the latest symbol of its malignant presence.