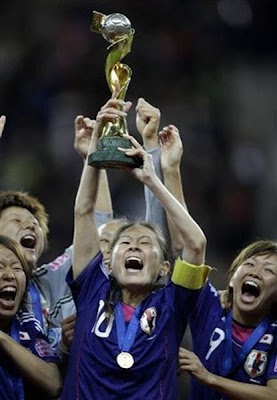 Homare Sawa’s amazing equalizer goal with less than six minutes to play in extra time took the air out of a highly favored American team and set the stage for an improbable and classic world cup victory for Japan: Allen L Roland

In Japanese, Homare means Noble Honor and yesterday Homare Sawa had the noble honor of bringing a Japanese team back from the precipice of a certain World Cup defeat in the final minutes of extra time with one of the greatest pressure goals in World Cup history ~ counting both men and women.

The Americans had finished a scoreless first half with a 12-5 shot advantage but only one was on target and that hit the post. Japan had been bent by a furious American onslaught but they did not break.

The Americans finally broke through in the 69th minute with Alex Morgan breaking free on a brilliant pass from Megan Rapinoe ~ clearly beating Japan goalkeeper Ayumi Kaihori from well outside the box with a scorching drive into the far corner of the net.

But with just nine minutes to play in regulation time, Japan got a break when Buehler and Krieger failed to clear the ball in front of the American net and Aya Miyama suddenly found the loose ball and flicked it into the net from close range.

Tie game and on to extra time.

Once again, with about sixteen minutes to play Abby Wambach gave the U.S. a 2-1 lead ~ scoring an emphatically headed goal on a brilliant pass from Alex Morgan in the 104th minute.

Victory seemed assured for the Americans who went defensive, substituting for their key playmaker and striker Rapinoe, but with less than six minutes left ~ it was Homare Sawa’s turn to achieve the impossible ~ and that she did with an amazing run through the box on a corner kick where she twisted in the air, thrust out her leg and sent a heel shot towards the goal while tumbling to the turf. She never saw the ball graze Wambach’s arm and be redirected into the net well out of reach of the diving U.S. goalkeeper Hope Solo.

That was the turning point ~ you could actually see the momentum shift for the overconfident Americans had never anticipated a shootout but Japan was hoping, prepared and ready for that eventuality. When Boxx missed the first shot on a great kick save by Kaihori and Miyama scored on her first in round one ~ the dye was cast. Sakaguchi’s drive through the hands of Solo in round three, after two more American misses, made it 2-0 Japan. Wambach’s score in round four heightened the tension but Kumagai’s smash over the outstretched Solo sealed the deal 3 -1.

But Homare Sawa’s amazing equalizer was the stuff of legends and here it is in slow motion. Savor this moment, as all of Japan most certainly is, for here is the heart of a true champion rising to the occasion on a world stage and delivering the goods. 30 second video ~ http://www.youtube.com/watch?v=KIqh8Ui8TNM