OBAMA NEEDS PRIMARY CHALLENGE / BERNIE SANDERS IS THE ONE 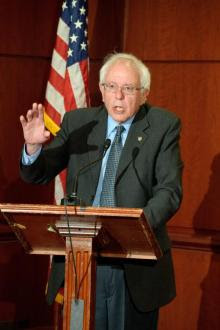 President Obama needs to be dramatically reminded that he represents Main Street America ~ not just Wall Street and special interest groups. Vermont Senator Bernie Sanders is just the man to forcibly deliver that message in a Primary battle based on America’s true values: Allen L Roland

1. A majority of the American people and Bernie want to protect Social Security, Medicare and Medicaid ~ Obama and the Republicans don’t.

2. A Majority of the American people want to tax Billionaires ~ Obama and the Republicans don’t.

3. A majority of Americans want to end the occupations of Iraq and Afghanistan (so called wars) ~ Obama and the Republicans don’t.

4. A Majority of Americans want to protect the environment ~ Obama and the Republicans don’t.

5. A Majority of Americans want to invest in Public Education and Jobs ~ Obama and the Republicans don’t.

6. A Majority of Americans want to curb corporate greed ~ Obama and the Republicans don’t.

7. A Majority of Americans want to protect civil rights ~ Obama and the Republicans don’t.

8. A majority of Americans want to protect rights in the workplace ~ Obama and the Republicans don’t.

Bernie Sanders is an honest strident voice in the political wilderness of Washington, DC crying out for moral values and political decency in a jungle of lobbyists, special interest groups and greedy political opportunists.

Here’s a short 12 minute video of Bernie offering a fictitious Congrats to the Gang of Six, the Powerful, the Wealthy, and Multinational Corporations on their recently announced long-term deficit reduction plans ~

“ Two and a half years ago when Barack Obama, then a senator from Illinois, ran for president of the United States, he made it very clear if you voted for him there would be no cuts in Social Security… What Senators Coburn, Crapo and Chambliss have managed to do in the Gang of Six is reach an agreement where there will be major cuts in Social Security. Don't let anybody kid you about this being some minor thing. It is not. What we are talking about is that Social Security cuts would go into effect virtually immediately. Ten years from now, the typical 75-year-old person will see their Social Security benefits cut by $560 a year. The average 85-year-old will see a cut of $1,000 a year. Now, for some people here in Washington, maybe the big lobbyists who make hundreds of thousands a year, $560 a year or $1,000 a year may not seem like a lot of money, but if you are a senior trying to get by on $14,000, $15,000, $18,000 a year and you're 85 years old, the end of your life, you're totally vulnerable, you're sick -- a $1,000 per year cut in what you otherwise would have received is a major, major blow.” http://www.commondreams.org/view/2011/07/21

Bernie ends that video with these words ~ words which endear him to his constituency, which have made him the longest serving independent member of Congress in American history, as well as me and millions of Americans who see him as a voice of truth in a din of deceit ~ “This senator is going to fight back. I was not elected to the United States Senate to make devastating cuts in Social Security, in Medicare, in Medicaid, in children's programs while lowering tax rates for the wealthiest people in this country.”

William Rivers Pitt correctly describes the growing political despair of millions of Americans when he recently wrote ~: "It is difficult to describe this emotion. I'm used to disappointment, fairly comfortable with heartbreak, and am well acquainted with rage. Over the course of my lifetime, my presidents have been Nixon, Ford, Carter, Reagan, Bush, Clinton, Bush, and now Obama ... and each, in his own way, has been worse than the last." http://www.truth-out.org/so-despair/1311620664

As Jeff Cohen wrote yesterday in AlterNet ~ “ Independent Senator Bernie Sanders of Vermont ~ widely seen as “America’s Senator” ~ is so disgusted by recent White House actions that he called Friday for a challenge to Obama in Democratic primaries: “I think it would be a good idea if President Obama faced some primary opposition.” Although Sanders has said clearly that he’s running for reelection to the senate in 2012 ~ not for president ~ his comment led instantly to a Draft Sanders for President website. See story ~ http://www.alternet.org/story/151777/obama_is_no_victim_of_the_right_wing_--_he%27s_pandered_to_corporate_interests_for_years?page=2

Cohen is correct that President Obama has pandered to Corporate interests for years but I would go one step further to say that Obama’s base support is no longer enthusiastic Progressives, Independents, Youth, Women, Seniors or even Blacks. Can anyone explain or justify that over 20% of our country’s income (it was 7 percent in 1980) now goes to the richest 1 percent of Americans.

Obama’s base is now the Corpocracy and a primary challenge would reveal this dichotomy and could well be used as a lever against any deal which would cut the social security safety net while maintaining tax breaks for the rich.

I agree with Cohen in that it could well be a powerful movement-building opportunity for activists tired of feeling hopeless with Obama ~ or I would add, betrayed by Obama’s broken promises which now include Social Security.

Please join me and jump on the Bernie Sander's bandwagon.

We cannot afford to settle for the lesser evil ~ we don’t have to and should not.