HIJACKED DEMOCRACY / WE ARE NOW A FASCIST CORPOCRACY 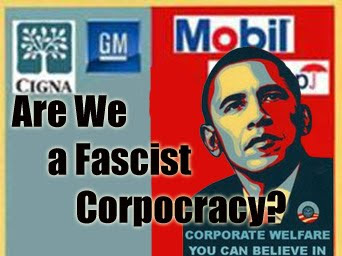 Mark Twain once wrote true patriotism, the only rational patriotism, is loyalty to the Nation ALL the time and loyalty to the Government ONLY when it deserves it. Our present corporate welfare state government does not deserve our loyalty for it has not only hijacked democracy but we have become a fascist corpocracy in the process: Allen L Roland

Do you realize that the U.S. military spends a cool $20billion on air conditioning annually in Iraq and Afghanistan. The U.S. military forks out a whopping $20.2 billion a year on keeping troops in Iraq and Afghanistan cool, it has emerged. This alarming figure is more than Nasa's entire annual budget and trumps the amount the G-8 has pledged to aid Egypt and Tunisia. It's even more than the clean up cost of BP’s Gulf oil spill. See full report ~

The Obama administration not only represents corporate welfare you can believe in but, in the process, we have moved from a democracy toward a fascist corpocracy ~ which millions of Americans patriotically celebrate while still being manipulated by false threats, false promises and nightmares. President Obama's once formidable Main street base has now been replaced by Wall Street's financial elite and an arrogant and greedy corpocracy.

These days I often think of BBC's incredible documentary The Power Of Nightmares which was broadcast on November 3, 2004 and is still more than relevant today.

Mike Conley's transcript said it all ~ " Increasingly, politicians are seen simply as managers of public life. But now, they have discovered a new role that restores their power and authority. Instead of delivering dreams, politicians now promise to protect us from nightmares. They say that they will rescue us from dreadful dangers that we cannot see and do not understand. And the greatest danger of all is international terrorism. A powerful and sinister network, with sleeper cells in countries across the world. A threat that needs to be fought by a war on terror. But much of this threat is a fantasy, which has been exaggerated and distorted by politicians. It's a dark illusion that has spread unquestioned through governments around the world, the security services, and the international media."

Manufactured fear, corporate welfare and false patriotism are also some of the 14 key characteristics of a fascist state. Dr. Lawrence Britt has examined the fascist regimes of Hitler (Germany), Mussolini (Italy), Franco (Spain), Suharto (Indonesia) and several Latin American regimes. Britt found 14 defining characteristics common to each ~ and America has virtually all of them;

1. Powerful and Continuing Nationalism - Fascist regimes tend to make constant use of patriotic mottos, slogans, symbols, songs, and other paraphernalia.

2. Disdain for the Recognition of Human Rights - Because of fear of enemies and the need for security, the people in fascist regimes are persuaded that human rights can be ignored in certain cases because of "need."

3. Identification of Enemies/Scapegoats as a Unifying Cause - The people are rallied into a unifying patriotic frenzy over the need to eliminate a perceived common threat or foe.

4. Supremacy of the Military - Even when there are widespread domestic problems, the military is given a disproportionate amount of government funding, and the domestic agenda is neglected. Soldiers and military service are glamorized.

5. Rampant Sexism - The governments of fascist nations tend to be almost exclusively male-dominated. Under fascist regimes, traditional gender roles are made more rigid.

7. Obsession with National Security - Fear is used as a motivational tool by the government over the masses.

8. Religion and Government are intertwined - Governments in fascist nations tend to use the most common religion in the nation as a tool to manipulate public opinion.

9. Corporate Power is protected - The industrial and business aristocracy of a fascist nation often are the ones who put the government leaders into power, creating a mutually beneficial business/government relationship and power elite.

10. Labor Power is suppressed – Because the organizing power of labor is the only real threat to a fascist government, labor unions are either eliminated entirely, or are severely suppressed.

11. Disdain for Intellectuals and the Arts - Fascist nations tend to promote and tolerate open hostility to higher education, and academia.

12. Obsession with Crime and Punishment - Under fascist regimes, the police are given almost limitless power to enforce laws. The people are often willing to overlook police abuses and even fore go civil liberties in the name of patriotism.

13. Rampant Cronyism and Corruption - Fascist regimes almost always are governed by groups of friends and associates who appoint each other to government positions and use governmental power and authority to protect their friends from accountability.

14. Fraudulent Elections - Sometimes elections in fascist nations are a complete sham. Other times elections are manipulated by smear campaigns against or even assassination of opposition candidates, use of legislation to control voting numbers or political district boundaries, and manipulation of the media.

So are our present active duty military currently fighting for our nation, a democracy, or an increasingly fascist government corpocracy?

As the Rev Michael Piazza writes in Liberating Word ~ “ When war is profitable, it becomes too tempting to resist. We cloak our attitudes in terms of patriotism and supporting our troops, but the truth is, if war wasn't so profitable our troops might not be so endangered. Is it pure coincidence that the South, which is most economically dependent on military expenditures, is also the region where support for the wars in Iraq and Afghanistan is the greatest? Will we ever make truly ethical choices between war and peace if war is so profitable?”

And what has the war (Occupation) in Afghanistan really achieved? The Independent revealed the sordid truth yesterday ~ “At least 60 people died in a suicide bombing just 25 miles from Kabul yesterday. In a few days' time, a report on Afghanistan from the International Crisis Group will say that violence and the billions of dollars in international aid have brought wealthy officials and insurgents together. As a result, "the economy is increasingly dominated by a criminal oligarchy of politically connected businessmen". The negatives column in the Afghan war's balance sheet does not get any shorter. So far, the conflict has lasted nine years, eight months and 17 days, cost the lives of 2,547 coalition troops, and between 14,000 and 34,000 civilians, created millions of refugees, and opened up a black hole in Western economies that has sucked in more $500bn dollars. Afghanistan costs the US around $10bn (£6.3bn) a month; and Britain will pay £4.5bn this year.” http://ind.pn/lE4DZk

A new report by the Carnegie Endowment for International Peace, called Afghanistan: The Impossible Transition says that the idea of transition by 2014 is "unrealistic" and warns: "If the transition were carried out, it would provide a considerable boost to the insurgency and, ultimately, the defeat of the Karzai regime." Over the past two years, the security situation has deteriorated in the border provinces, according to the report. President Karzai is showing increasing signs of moving closer to Iran and Pakistan. Please note, the Karzai regime is a U.S. appointed and manipulated puppet government or better yet, another budding fascist corpocracy.

Lastly, World War II air combat veteran and the late historian Howard Zinn, comments on the important difference between the Government and the Nation ~ and how "government" has hijacked patriotism in the service of the highest corporate bidders. As such, when our democratic government becomes a corpocracy and destructive of our founding rights, we have every right to alter or abolish that government or at the very least severely criticize it.