VOYAGER 1 AT EDGE OF DEEP SPACE WITH ITS MESSAGE 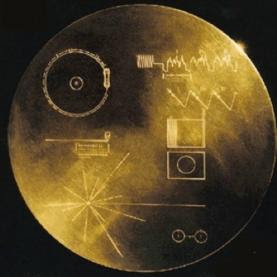 Thirty-three years into its voyage into deep space the space-hardened craft of Voyager 1 nears a milestone in its journey out of the solar system. But within this small craft is a gold plated copper record disc with 115 images and natural sounds of nature as well as songs of celebration and greetings from a small pale dot in the vast black void of our solar system called Earth: Allen L Roland

Professor Edward Stone, was asked in 1972 to work part-time at NASA’s Jet Propulsion Laboratory as chief scientist for a new space mission, one that would probe the limits of the solar system and eventually enter interstellar space ~ and now, 33 years after the launch of Voyager 1 and 2 , he says the goal is in sight.

Harvey Leifert writes in Scientific America of this historic event ~ "Voyager 1 is the most remote human-made object," Stone says. "It's now 115 astronomical units from Earth," that is, 115 times farther than Earth is from the sun, or "a bit more than 10 billion miles [16 billion kilometers]." Voyager 2 has traveled somewhat slower and in a different direction and is now around 14 billion kilometers from Earth.

Both Voyagers are still within a "bubble" created by the solar wind, a stream of charged particles radiating outward from the sun at 1.6 million to 3.2 million kilometers per hour. This bubble, or heliosphere, exists, says Stone, because a magnetic field from outer space, likely resulting from the explosion of supernovae five million to 10 million years ago, is pushing back against the solar wind.

In the past six months, Voyager 1 has signaled that the radial speed of the solar wind is zero, meaning that the spacecraft is approaching the final boundary of the solar system, the heliopause. Stone and his colleagues had not expected Voyager to reach this point for several more years, meaning that the boundary lies closer to the sun than they had thought.

It may take a year or more of data analysis to confirm that Voyager 1 has actually crossed the heliopause, which is a flexible boundary, Stone says. There probably will not be a eureka moment when it happens. We will continue to receive data from the Voyagers until around 2020 or 2025, Stone says, well after they have left the solar system.

Leaving the solar system, he says, will be "a milestone in human activity." Both Voyagers will likely outlive Earth, he notes. When, billions of years from now, the sun swells into a red giant, the Voyagers, albeit with their radioactive generators long exhausted and instruments frozen, will continue to wend their lonely ways through interstellar space and remain on course for the unknown, bearing a record disk and images of 20th-century Earth, music from many of its cultures, and greetings in dozens of its languages. They may be the only evidence the human race ever existed." http://www.scientificamerican.com/article.cfm?id=cosmos-incognita-voyager&WT.mc_id=SA_WR_20101221

The contents of that copper record disc were selected for NASA by a committee chaired by the late Carl Sagan of Cornell University. Sagan and his associates assembled 115 images and a variety of natural sounds, such as those made by surf, wind and thunder, birds, whales, and other animals. To this they added musical selections from different cultures and eras, and spoken greetings from Earth-people in 55 languages, along with printed messages from President Jimmy Carter and U.N. Secretary General Kurt Waldheim.

So now imagine, if you will, at some point of distant time ~ an Intergalactic spaceship retrieving a seemingly lost frozen space vehicle and cautiously examining its contents and coming across this strange gold-plated copper disc. Of course, they may not be able to fully decipher the languages but the music most certainly would connect to them. And here is a song, composed by Scott Deturk and sung by myself, that I suggest just might give them a heart felt glimpse of our mother earth and its inhabitants. Click on and enjoy ~

You are My Mother, Earth