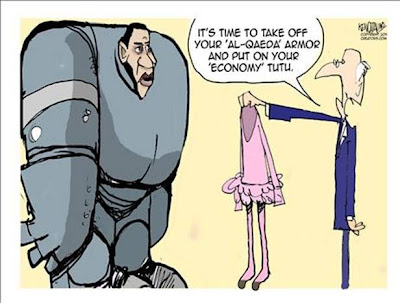 The Arab spring uprising is rapidly revealing the chinks in America’s military colonialism and financial terrorism as well as the moral and economic cost of our imperialistic misadventures in the Middle East: Allen L Roland

For decades, the United States has provided military aid, facilitated the sale of weaponry, and transferred vast quantities of arms to a host of Middle Eastern despots in order to protect our oil and financial interests. Arming Arab autocrats, however, isn't only the work of presidents past. A Tom Dispatch analysis of Pentagon documents finds that the Obama administration has sought to send billions of dollars in weapons systems ~ from advanced helicopters to fighter jets ~ to the very regimes that have beaten, jailed, and killed pro-democracy demonstrators, journalists, and reform activists throughout the Arab Spring.

The Western Old World Order armor of control, manipulation and military oppression is now being clearly seen by the world who watches American made military aircraft, tanks and armament being used by Arab despots to quell these pro-democracy demonstrators, journalists and reform activists throughout the Arab world. So the Arab spring rebellions are revealing the true source of America’s moral and economic fall ~ an out of control Military Industrial complex fueled by greed and controlled by a Wall Street corpocracy ~ which President Obama obviously answers to.

Three ongoing military campaigns in Iraq, Afghanistan and Libya are costing the U.S. a fortune and give no comfort to the nearly 14 million unemployed Americans. With food stamps and a minimum wage the only hope for many, a career at McDonald's has now become very appealing. 3 minute video http://www.youtube.com/watch?v=wnUllnfebZ8

But what the world doesn’t see is the financial terrorism being actively practiced in the Middle East and North Africa ~ particularly in Libya. Max Keiser (RT) explains the term 'Financial Terrorism' where International Banks like Goldman Sachs have been looting Libyans money and were able to siphon billions of dollars from that country because they excel in financially raping countries by cheating and stealing through monopoly, deceit and lies.

Six minute must see Video: Max Keiser’s explains financial terrorism and leaves a message for the world "Revolt now or be a debt slave" for life. http://www.informationclearinghouse.info/article28262.htm