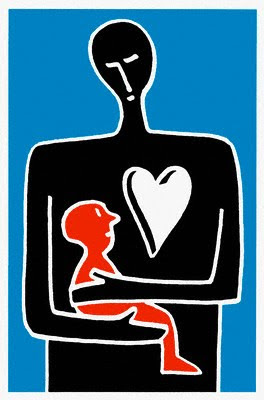 You are the bows from which your children as living arrows are sent forth. The archer sees the mark upon the path of the infinite, and he bends you with his might that his arrows may go swift and far. Let your bending in the archer's hand be for gladness; for even as he loves the arrow that flies, so he loves also the bow that is stable : Khalid Gibran / The Prophet

I got a touching father’s day card today from my youngest daughter Kelly and she told me that I have been an inspiration to her by always being honest and living my life to the fullest. She also thanked me for being her father which reminded me of something I’ve always believed ~ Khalid Gibran’s quote about our children being the sons and daughters of Life's longing for itself.

As such, I am indeed the bow that has sent forth four children, as living arrows, into this imperfect world. I have been far from perfect as their Dad but I have always loved and cherished them on their separate flights.

They may not all agree with that statement ~ but a wise father learns to accept his mistakes and celebrate his triumphs hoping that his children will learn from those failings and be inspired by his victories.

I have learned that standing alone and singing my song is really belonging ~ I do not see myself as a stranger and alone on this earth ~ and evidently that is a valuable lesson I have passed on to my children.

All my children are adults now and they, in turn, have sent forth five living arrows into this world. They, as parents, are also not perfect but they are launching and cherishing their children on their separate flights.

As a father, I find myself increasingly becoming an interested observer of this family archery for each of my children has seemingly taken my strengths and discounted my failings in becoming a stable bow to send forth their own children.

But what makes a stable bow? Is it always being there for my children? Is it setting goals and principles for them to live by? Is it giving them what my father gave me?

Since I never knew or experienced my father ~ my parents were divorced shortly after my birth ~ I can only draw on what my grandfather gave me during the first six years of my life, and in that sense ~ my children have been blessed.

For my grandfather gave me the gift of himself ~ the joy, exuberance and magic of his presence still lives within my heart to this day.

And I, in turn, have given my children the same gift and hopefully they will pass it on to their children.

As such, the stable bow of fatherhood may well be the honest gift of myself for in having the courage to be inner guided and live my dreams ~ I have not only shown my children the path of the infinite but I have also fully shared the struggles, joy and delight of the flight.