SCAN, PAT DOWN OR SCAM ? 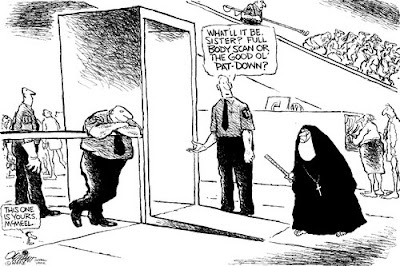 When a country is driven by fear and greed, the people become cattle and learn to bear their constant degradation and humiliation ~ for that is the price of their so called security from unknown threats and enemies: Allen L Roland

The American people have become willing cattle by refusing to stand up for their rights and allowing themselves to be bamboozled by the financial elite ~ who use fear and greed to humiliate them and lead them to financial slaughter.

No where is this more evident than the TSA Scan or Pat Down outrage where Former Homeland Security chief Michael Chertoff ordered the full body x-ray scanners before the so-called "underwear bomber" scare. The House actually voted down the use of body scanners, but the TSA ignored the will of Congress and bought the machines anyway ~ wasting $25 million in stimulus funds.

TSA’s (Janet Napolitano says) that the backscatter X-ray machines in the Airports are safe: The reality is that according to doctors at Columbia and Johns Hopkins “the radiation at airports is twenty times what you would get from an x-ray in your doctor’s office.”

Now Chertoff personally profits from selling them to the
Department of Homeland Security he used to head. The new government mandated hands-on pat down searches are used for passengers who find naked body scans inappropriate, when something suspicious appears in screening, or randomly. They can take two minutes per passenger and involve sliding of the hands along the length of the body, along thighs and near the groin and breasts, according to the Associated Press.

Ron Paul has introduced a bill to rectify this outrage and suggests ~ “ Imagine if the political elites in our country were forced to endure the same conditions at the airport as business travelers, families, senior citizens, and the rest of us. Perhaps this problem could be quickly resolved if every cabinet secretary, every member of Congress, and every department head in the Obama administration were forced to submit to the same degrading screening process as the people who pay their salaries.”

And while we’re at it, let’s require that every cabinet secretary, every member of Congress, and every department head in the Obama administration is on social security as well as Obama’s so-called health care plan.

There are other options ~ I understand that Orlando is throwing the TSA out of its airport and replacing them with private security, an option open to EVERY airport in the US.

We Americans have been increasingly scanned, patted down and scammed by both the Bush and Obama administration so let’s not only opt out of flying on November 24th but turn the table on the financial elite by not playing by their rules and self serving regulations ~ most of which are based on greed and fear.

It was James Madison who correctly wrote ~ “ A standing military force, with an overgrown Executive will not long be safe companions to liberty. The means of defense against foreign danger have been always the instruments of tyranny at home. Among the Romans it was a standing maxim to excite a war, whenever a revolt was apprehended. Throughout all Europe, the armies kept up under the pretext of defending, have enslaved the people."

Contact Congress today and tell them you’ve had it with the TSA! Urge them to follow Dr. Paul’s lead by immediately cosponsoring H.R. 6416 to restore the dignity of American citizens.