OBAMA STILL DOESN'T GET IT / HE FAILED TO LEAD 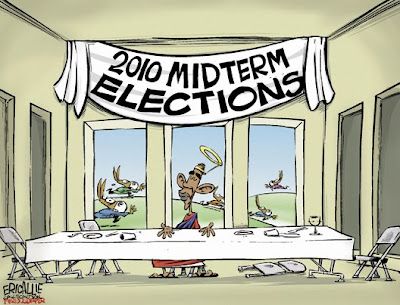 President Obama still doesn’t get that the 2010 mid-term elections were a referendum on him ~ and specifically his failure to deliver on the mandate of change that he promised in 2008. His progressive and Independent base fled the scene but he still doesn’t get that his spineless passivity has left him alone at the table still drinking his own kool aid: Allen L Roland

I’ve read all the postmortems on the midterm elections which was not a surprise to me ~ mainly because I’m one of the millions of Americans who voted for change in 2008 and saw Barack Obama as an agent of that change and was quickly disappointed by not only his cabinet selections but his reluctance to deliver on those promises he glibly offered before his election. As Ted Rall correctly writes ~” People are pissed. They hate the bailouts, but the bailouts aren’t the main point. More than anything else, the American people are angry that their government doesn’t even pretend to give a damn about them.”

Or as Marshall Ganz also correctly wrote in the LA Times ~ “ The nation was ready for transformational leadership, but the president gave us transactional leadership ( horse-trading, operating within the routine, maintaining, rather than changing the status quo). And, as is the case with leadership failures, much of the public's anger, disappointment and frustration has been turned on a leader who failed to lead.”

DeGraw goes on to define the real problem ~ “ Hopefully by 2012 the American public will finally understand that they must support Independent candidates and alternative political structures, and cannot vote for Democrats or Republicans, if they ever want to achieve the needed change. Both parties serve the same corporate masters. Yes, there are some differences between the two. The Democrats serve half of the top economic one percent, and the Republicans serve the other half. We have Neo-liberals to the left and Neo-cons to the right, leaving 99% of us without representation.”

The loss of both Russ Feingold and Alan Grayson, who led the fight against the corporate elite are outstanding examples of how the progressives have been run over by both parties ~ “Two politicians in Congress who actually fought for us against the Economic Elite just lost their reelection bids. Alan Grayson and Russ Feingold lost because record amounts of cash went to funding the candidates who ran against them. Even their own party’s leadership didn’t support their reelection efforts. The bottom line in this money rigged system is that you cannot run against the most powerful corporations and win. They will just pour unlimited funds into defeating you, and your own party will desert you. “

So what can we do? How can we defeat the corpocracy and return the Republic to the people?

DeGraw offers a bottom up approach that just might work if we can get beyond our own political cynicism ~ “ Yes, I sound extreme, but these are extreme times. I’m not going to sit quietly as our future is ripped out from under us. I will not let my family’s well being and our country’s fate be decided by short-sighted greed addicted forces that have looted the global economy and brought poverty, death and destruction throughout the world.

I see the path we are on and I intend to change it!

Click on common ground and see how we can all aggressively move on common sense political reforms.

We are the ones we have been waiting for!