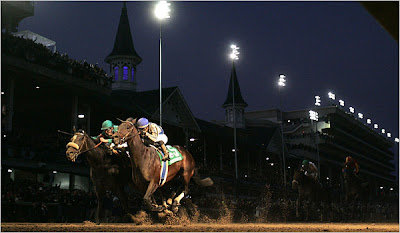 Jockey Garrett Gomez rides Blame, right, to edge out Zenyatta, with jockey Mike Smith aboard, in the Classic race at the Breeders’ Cup in Louisville, Ky., on Saturday.

In some ways Zenyatta’s greatest race was her last one, the one she lost by a head, for 72,000 spectators at Churchill Downs clearly saw the heart of a champion who passed 11 horses in the stretch and only a scant fraction of a second kept her from passing blame at the finish line and retiring undefeated: Allen L Roland

I’m not usually into horse racing but the Zenyatta story caught my attention ~ undefeated in 19 races, always coming on in the stretch and the only girl racing with the boys in the $5 million Breeders’ Cup Classic.

The race left 72,000 spectators, a national TV audience, including myself, breathless but I’ll let Joe Drape, NY Times.com, who was there, tell the story ~ this is sports writing at its best !

LOUISVILLE, Ky. “ Her owners, Jerry and Ann Moss; her trainer, John Shirreffs; and for that matter anyone who had watched and loved the great race mare Zenyatta knew that the real running ~ the edge-of-the-seat-drama ~ really didn’t start until she turned for home. Nineteen times before, Zenyatta had looked desperate and in trouble at the top of the stretch. Nineteen times before, she had found a gear to rocket past her rivals in the final strides.

So when jockey Mike Smith cornered the big girl and squared her shoulders toward the finish line in dead last, the more than 72,000 people here at Churchill Downs rose to their feet and held their breath. Zenyatta not only had 11 horses to pass, she also had a dozen or so lengths to make up.

This time, however, Zenyatta was in a different kind of trouble. This was the $5 million Breeders’ Cup Classic, with a field full of thoroughbred racing’s royalty. They were boys. She was the only girl in the bunch, and at age 6 the oldest of the lot.

Zenyatta had started sluggishly, too. Sure, she always spotted fields some daylight, but Smith was worried before they hit the first turn. Her stride was uneven and looked like a rocking horse’s, with a wobbly glider. Dirt was hitting her face for the first time ~ Zenyatta had run 17 of her previous races on smoother synthetic surfaces.

Somehow, Smith settled her, and Zenyatta picked up some steam rounding the far turn. But now Smith was stuck inside, a wall of horses ahead of him.

He angled her left, one path, two paths, three paths, and it was not pretty. Zenyatta’s strength is power, not agility, and she looked like a bull trying to fight her way out of a ring.

“I needed to cut some corners somewhere,” Smith said.

When he finally got her outside and clear, Zenyatta charged. She shot by Musket Man and Paddy O’Prado and absolutely gassed the Preakness champion, Lookin at Lucky.

There was only one colt left, and he was a good one. Blame had won 8 of 12 in his lifetime, and 5 of his last 6. His rider, Garrett Gomez, had threaded Blame between two rivals and still had seven lengths on Zenyatta with the wire getting closer.

“At the eighth pole, I thought I was going to get there pretty easy,” Gomez confessed. But then he peeked beneath his arm and saw Smith and Zenyatta getting bigger and bigger.

Smith was fanning Zenyatta, a mare he loved, with his left hand. She dug in, and Blame’s lead grew smaller with every stride. With 20 yards to go, Zenyatta was at Blame’s tail. Then hip. Then neck. There was a roar, the flash of a finish-line photo, and then silence.

Gomez thought he and Blame had won. Smith knew they had.

“She ran her heart out,” Gomez told Smith.

The photo finish will show that a dwindling head separated Zenyatta from a perfect 20-0 record. The race chart will say Blame covered the mile and a quarter in 2 minutes 2.28 seconds and rewarded his backers $12.40 for a $2 bet.

The sight of Smith in tears, his head buried in his hands, moments after the race, showed the fuller story. It told of how a kind and fast horse can lead to heartbreak as well as majesty.

Smith was inconsolable. He is a Hall of Fame rider who has been on the best horses in the world. But Zenyatta, he would tell you, “was the best ever, a gift from God, my everything.”

It didn’t matter to him that this was a race for the history books, and Zenyatta was just as amazingly noble in defeat had she been in her prior victories. He, Shirreffs and the Mosses have campaigned a thoroughbred who transcended the racetrack. They shared her with casual fans, which in turn fell for Zenyatta’s charisma and mastery.

Gomez understood what he had done by defeating Zenyatta, and was not entirely comfortable with it. He won three races this Breeders’ Cup and readily admitted that the victory atop Blame here was the biggest of his career.

“I really do have mixed emotions about it,” he said. “She’s been an ambassador for racing. We had a lot of people out here supporting her. She going for 20 of 20, and she came up a head short. I’m glad I was able to give her the defeat, but at the same time I wish she could have gone out 20 for 20 at someone else’s expense.”

Instead, Zenyatta went out at the expense of Smith. Or at least he thought so, and he couldn’t stop replaying the race.

“I got away slow and got squeezed out of there,” Smith tried to explain, tears swimming at the corner of his eyes. “I couldn’t level her off. If you have to blame anyone today, it would be me.”

Soon, the tears streamed down Smith’s face, and what could have been weighed too heavily on him.

Smith lifted his head when he was asked how good his horse was.

“She ranks up there with the greatest of all time,” he said.

Zenyatta had run like one of the greats. Blame’s trainer, Albert Stall Jr., knew she had, too.

“In defeat, she didn’t lose anything,” Stall said.

Smith, however, had wanted to make sure the horse he loved got the accolades he felt she deserved.

“If I’d have won this, you could arguably say she was,” he said. “To come up a nose short.”

Blame’s trainer, Albert Stall Jr, was correct ~ “ in defeat Zenyatta didn’t lose anything” ~ for millions of people, including myself, will never forget experiencing her giant heart and will to win, which will live far longer in our memories than a narrow defeat at the Breeder’s Cup on Saturday, November 6, 2010.