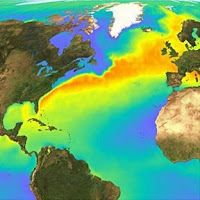 Miles of long underwater plumes loaded with toxic oil and dispersal chemicals are already in the gulf loop and will soon be making landfall on the East coast and eventually Europe by late 2012: Allen L Roland
It's day 63 and time to think global about the Gulf oil disaster because in 18 months it could well be flowing into northern Europe and also as far south as Senegal. Once the oil is trapped in the Mediterranean, you will essentially have a large cesspool generating toxins to the surrounding area. It could also hit Israel through the Mediterranean Sea as the currents pull the oil in from the Atlantic.
That 18 months means close to December, 2012 ~ which nicely fits many global doomsday or consciousness shift prophecies. In that regard, the ongoing Gulf oil gusher ( not spill ) has the makings of a worldwide catastrophe and a call for not only action but a global shift in consciousness ~ from ego centered to a soul centered consciousness of mutual cooperation, altruism and interdependence with nature. But I have always felt that the world will have to be scared into this change and perhaps we are now on the leading edge of that fear driven shift.
With approximately 100,000 barrels of oil per day ( up from BP's earlier estimate of 5,000 barrels per day ) gushing into the gulf ~ three things become apparent;
1. Both BP and the Obama administration have not been telling the American public the truth about this growing disaster ~ BP for legal reasons and Obama for political reasons.
2. There has been a determined effort by both BP and the Obama administration to both protect BP and shield the public from seeing direct evidence of this growing catastrophe.
3. There has been no effort by the Obama administration to alert the Gulf course as to the eventual possibility of a massive toxic methane blow out under the fractured sea bed, the very real probability of a major tsunami if that were to occur and the much more likely near term possibility of the first major hurricane lumbering into the gulf, it's grey clouds rapidly turning dark with toxic oil and chemicals as it lays waste to the Gulf states with its toxic black rain.
Perhaps it's time to remind my readers that we live in a fragile ecosystem and we threaten this interdependent system, with our man-made catastrophes, at our own peril.
As Carl Sagan said, when describing planet Earth from deep in space via Voyager 2 ~ " we are just a pale blue dot " A small stage in a vast cosmic arena ~ a lonely spec in the cosmic dust " ~ a small stage where our ego driven dramas mean absolutely nothing to an evolving universe cemented in love and the urge to unite.
For I would also point out that we are an integral part of a vast cosmic loving plan ~ a Unified Field of love and soul consciousness ~ which we all have access to if we will but surrender to our innate propensity to unite, love and cooperate with one another as well as our precious connection to nature. Please listen to and take note of Sagan's poignant three minute plea to a world apparently determined to destroy itself. http://www.youtube.com/watch?v=p86BPM1GV8M&feature=youtube_gdata
To live in the hearts we leave behind is to never die: Carl Sagan.
Allen L Roland
http://allenlrolandsweblog.blogspot.com/2010/06/gulf-oil-disaster-destination-europe.html
This weblog is sustained through donations from people like yourself. Please send check or Money Order to Allen L. Roland, PO Box 1221, Sonoma,CA 95476 Also accept Visa, MasterCard and Discover .
Freelance Alternative Press Online columnist and psychotherapist Allen L Roland is available for comments, interviews, speaking engagements and private consultations ( allen@allenroland.com )