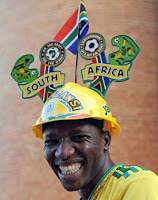 [ Click on photo to enlarge ]
A fan shows off his support for South Africa in
Nelson Mandela Square on Wednesday. South Africa will open the World Cup against Mexico on Friday. (Tim Groothius / Witters Sport/US Presswire / June 9, 2010)

I'm not a big soccer fan but I'm most certainly a World Cup fan where every four years International frenzy and magic blend into the world's greatest sporting event and brings our world a little closer in the process: Allen L Roland

I'm psyched, it's World Cup time ~ and believe me, this event dwarfs the World Series, the Olympics and the Super Bowl in worldwide excitement. There is nothing that can match the unbridled enthusiasm, pride, love, joy and heartbreak of a whole nation riding on the shoulders of its national World Cup team as South Africa, the host country, most certainly is.

The World Cup opens on Friday, June 11th in Johannesburg, South Africa and the first match is South Africa vs Mexico.
Let me set the stage ~ The Bafana Bafana (the team's nickname comes from the Nguni word for "the boys") will be playing before a country that has gone absolutely crazy over soccer and in a roaring Soccer City stadium which will be packed with over 90,000 vuvuzela-tooting South African fans ~ as well as a world wide TV audience of over 9 billion people..

Over 250,000 fans came out to cheer the team at a midday parade Wednesday that shut down part of Johannesburg. You will never find this national enthusiasm in the United States where soccer is still a distant cousin to baseball, football, basketball and hockey.

Back to South Africa where Kevin Baxter, LA Times, describes the magic you will see on Friday ~ " Reporting from Johannesburg ~ Forget South Africa's talented midfielder Steven Pienaar, hulking defender Matthew Booth or strapping goalkeeper Itumeleng Khune.The man who may give Mexico the most trouble in Friday's World Cup opener is a frail 91-year-old great-grandfather.Former South African President Nelson Mandela is expected to make a brief appearance at Johannesburg's Soccer City Stadium, where he will greet players and fans before South Africa and Mexico kick off the first World Cup to be played on African soil. And that could be bad news for Mexico because when Mandela is in the stadium, South Africans swear that strange things happen...
"We call it Mandela Magic," says Trevor Bongani, a young soccer fan from Johannesburg. "I don't know how it happens. That man is different."
http://www.latimes.com/sports/la-sp-mexico-world-cup-20100610,0,6884720.story

He sure is different ~ Mandela is a legitimate and revered world leader. So it's magic time again which always happens with the World Cup ~ wherever it is held.
Since I consider myself a citizen of the world ~ tomorrow I'm a South African and here's the official African World Cup song ( Waka Waka ) with Shakira to get you in the mood for the world's greatest sporting event. ( 4 minute Video )
http://www.youtube.com/watch?v=pRpeEdMmmQ0&feature=PlayList&p=504EC6F18716E259&playnext_from=PL&index=1
Allen L Roland
http://allenlrolandsweblog.blogspot.com/2010/06/world-cup-2010-its-magic-time.html
This weblog is sustained through donations from people like yourself. Please send check or Money Order to Allen L. Roland, PO Box 1221, Sonoma,CA 95476 Also accept Visa, MasterCard and Discover .

Allen L Roland is a practicing psychotherapist, author and lecturer who also shares a daily political and social commentary on his weblog and website allenroland.com He also guest hosts a monthly national radio show TRUTHTALK on http://www.conscioustalk.net/
ONLY THE TRUTH IS REVOLUTIONARY