Blue Samurai Are For Real / Japan Destined For Final Four

BLUE SAMURAI ARE FOR REAL / JAPAN DESTINED FOR FINAL FOUR 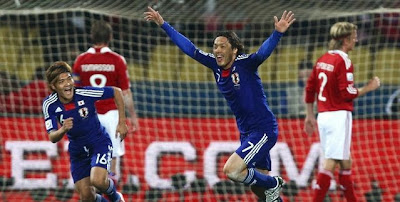 As the World Cup competition heats up ~ one team is gaining momentum with its inspired disciplined play and exuberant execution. That team is Japan's Blue Samurai who are destined for the final four and eventually the championship: Allen L Roland

The Cinderella team of the 2010 World Cup is Japan ~ the blue Samurai.
Japan is one of the most successful national teams in Asia, being a three-time winner of the AFC Asian Cup and having qualified for the last four consecutive FIFA World Cup finals. Yet no one seems to be taking them seriously ~ which decidedly works to their advantage. The bookies have installed Japan as a 50 to 1 choice to win the cup.

Their goalie captain is Yoshikatsu Kawaguchi ~ a renowned penalty stopper, making two saves in the shootout against Jordan in the 2004 Asian Cup quarter final and also saving from Croatia's Darijo Srna in the 2006 World Cup. During the 2007 Asian Cup he was instrumental in Japan's quarter-final win against Australia making two saves from Harry Kewell and Lucas Neill in the penalty shootout, thus making him the Man of the Match.

Their top scorer is Keisuke Honda ~ a whirling dervish of grace, power and footwork who always seems to find himself in scoring position or making an impossible pass to one of his talented team mates ~ like Yasuhito Endo. Honda believes that nothing is impossible and plays with that mindset.

Their head coach is Takeshi Okada ~ who was named Japan's head coach in December 2007 to replace Ivica Osim, who suffered a stroke, and he led the team to the 2010 FIFA World Cup knockout stage.
Okada has been here before and this time he has a finely honed, wily and balanced team who have been together for some time and who fiercely believe in their head coach.

The Intangibles in Japans' favor are the joy and excitement of these talented players who not only believe in themselves but seem impervious to pressure ~ particularly Kawaguchi and Honda.

Here's my knockout scenario ~ Japan beats an injured Paraguay team Tuesday and then slips by the exhausted winner of the Spain / Portugal battle on Saturday, July 3rd. Four days later they beat the winner of Argentina / Germany fracas in a shootout where Kawaguchi proves his penalty stopping skills.

By this time, all of Japan is delirious and the Blue Samurai edge an over confident Brazilian team whose individual talent cannot match Japans relentless offensive and defensive consistency as well as Honda and Kawaguchi's heroics.

Japan is the team with momentum and balance and will shock the world with their first World Cup on July 11th.