Gates Of Hell Are Opening In The Gulf

GATES OF HELL ARE OPENING IN THE GULF 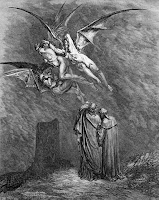 Now we know why the the gulf coast is not only drenched with the stench of a poisonous runaway oil gusher but the scent of a major deception perpetrated by BP and protected by the Obama administration ~ who are both terrified of the very real possibility of a major doomsday catastrophe in the making: Allen L Roland

Clouds or plumes of oil have been found drifting underwater in the Gulf of Mexico as far as 142 miles from the wrecked Deepwater Horizon drilling rig, government officials said Tuesday. At a briefing, Jane Lubchenko, of the National Oceanic and Atmospheric Administration (NOAA), said that tests conducted at three sites by a University of South Florida research vessel confirmed oil as far as 3,300 feet below the surface. The oil was found 42 miles northeast of the well site and also 142 miles to the southeast. One of these plumes was estimated at 22 miles long, 2 miles wide and 1300 feet deep ~ and the very existence of these plumes has been consistently denied by BP officials.

And what about the million gallons of oil dispersant Corexit 9500, which has been sprayed on the slicks so they will sink and not be visible from the air ?

Corexit 9500 contains compounds that are acutely toxic to invertebrates, and can cause chemical pneumonia if aspirated into the lungs following ingestion. What is seen beneath the slick hanging in the water is a toxic plume of light sweet crude and dispersant, masquerading as plankton. As soon as it is ingested by grazing fish, it starts a journey from the body of prey to that of predator, and on up through the food chain, getting more concentrated at every step.

Why are BP officials obviously lying ?

They are lying because legally the don't want to acknowledge the potential of the greatest environmental disaster of all time as well as there own culpability.

What are they hiding ?

The growing potential of a doomsday catastrophe which could ecologically literally wipe out the Gulf Coast ~ which explains why both Goldman and top BP officials, including CEO Tony Hayward, were selling significant amounts of BP stock days before the initial rig explosion.
This whole grade D movie cries out for an independent investigation and criminal indictments.

What is it that BP and the Obama administration does not want you to know ?

1. The volcano oil pressure is much too strong for any containment and they are still stonewalling this truth.

Dr. James P. Wickstrom reports in Rense.com on June 9th that It has been estimated by experts that the pressure which blows the oil into the Gulf waters is estimated to be between 20,000 and 70,000 PSI (pounds per square inch) ~ which is impossible to control and the benzene release could be deadly for both animals and humans.

But Wickstrom also reveals what US Scientists are forbidden to tell the public about the Gulf ~ " The estimated super high pressure release of oil from under the earth's crust is between 80,000 to 100,000 barrels per day. The oil along with the gasses, including benzene and many other toxins, is deleting the oxygen in the water. This is killing all life in the ocean. Along with the oil along the shores, there will be many dead fish, etc. that will have to be gathered and disposed of... The oil has now reached the Gulf Stream and is entering the Oceanic current which is at least four times stronger than the current in the Gulf, which will carry it throughout the world within 18 months... Take a U. S. map, lay it flat and measure inland just the minimum 50 miles of total destruction all around the Gulf of Mexico as to what you will read below... The carnage to the United States is so staggering, it will take your breathe away."
http://www.rense.com/general91/oilor.htm

2. The Gates Of Hell Doomsday scenario

Keith Olberman asks the question on Countdown on June 9th ~ Has the Oil Spill created a 'doomsday effect' for the Gulf ?
Olberman interviews Bob Cavner, veteran Oil Industry expert, who indeed confirms the possibility of a looming doomsday Gulf coast scenario but also the Obama administration and BP's reluctance to face this truth. Six minute must see video ~
http://act.commondreams.org/go/955?akid=77.3890.rELyCS&t=14

As far as I'm concerned, there is only one person who needs
his ass kicked in this whole uncomplicated nightmare ~ and Jon Stewart hilariously and rightfully identifies him as the President himself. ( Ten minute Video )
http://www.salon.com/news/politics/war_room/2010/06/09/obama_ass_kicked/index.html?source=newsletter

I've always felt that mankind would eventually have to be scared into an evolutionary shift in consciousness ~ where our greed and arrogance finally reaches the tipping point and Nature painfully forces us to become part of a cooperative and interdependent loving plan as well as a Unified Field of love and soul consciousness,

The Gates of Hell in the Gulf could well be that opening for this disaster has the potential of effecting the entire planet and here's the latest update confirming this from MSNBC. http://www.msnbc.msn.com/id/21134540/vp/37560013#37560013