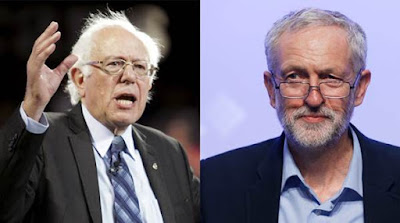 
As the inevitability of real change increases, resistance and backlash also increases as I have most certainly experienced in my heart centered work within the VA Medical establishment ~ but there comes a time when a tipping point is reached and the inevitable becomes a growing reality as we are now witnessing with the rise of Bernie Sanders and Jeremy Corbyn to positions of real leadership in a troubled world community: Allen L Roland, PhD


“Great spirits have always encountered opposition from mediocre minds. The mediocre mind is incapable of understanding the man who refuses to bow blindly to conventional prejudices and chooses instead to express his opinions courageously and honestly.”
~ Albert Einstein


In October of 2015, I wrote that there is a reason that Bernie Sanders has surged ahead in the Presidential Primary Polls and that Britain’s Jeremy Corbyn has done the same thing in the UK ~ it’s people power and it won’t and can't be stopped. The refreshing honesty and agenda of Bernie Sanders is a lifeboat in a sea of political deception and lost hope and soon he will be joined by the UK’s Jeremy Corbyn as a worldwide counter balance to corporate power and the global elite as well as a genuine reflection of a new world order based on people power ~ and now it's moving closer to a reality. See VT post ~  http://www.veteranstoday.com/2015/10/08/bernie-and-jeremy-a-new-world-order-based-on-people-power/


But we must first realize that all true change is resisted for the stumbling blocks on the path of the weak often become stepping stones on the path of the strong ~ as I well know in introducing real change to the VA through my heart centered work with Combat Veterans with PTSD.


But this backlash phenomenon also exists on a much larger political stage as we are witnessing in the 2016 Presidential primaries and well as in the UK with the emergence of Labor leader Jeremy Corbin.


To better understand this phenomenon ~ let's separate this resistance into stages ~ because in many ways it is similar to Schopenhauer's three stages of truth ("All truth passes through three stages. First, it is ridiculed. Second, it is violently opposed. Third, it is accepted as being self-evident.") ~ except in this case, there are seven stages.


Glenn Greenwald, The Intercept, brilliantly summarizes these stages in his recent article ~ The Seven Stages of Establishment Backlash:


" For those who observed the unfolding of the British reaction to Corbin's victory, it’s been fascinating to watch the D.C./Democratic establishment’s reaction to Sanders’ emergence replicate that, reading from the same script. I personally think Clinton’s nomination is extremely likely, but evidence of a growing Sanders movement is unmistakable. Because of the broader trends driving it, this is clearly unsettling to establishment Democrats ~ as it should be….. A poll last week found that Sanders has a large lead with millennial voters, including young women; as Rolling Stone put it: “Young female voters support Bernie Sanders by an expansive margin.”


The New York Times yesterday trumpeted that, in New Hampshire, Sanders “has jumped out to a 27 percentage point lead,” which is “stunning by New Hampshire standards.” The Wall Street Journal yesterday, in an editorial titled “Taking Sanders Seriously,” declared it is “no longer impossible to imagine the 74-year-old socialist as the Democratic nominee."

Greenwald goes on to confirm that there is a direct correlation between the strength of Sanders and the violent violent opposition and backlash it has triggered within the Democratic establishment and major media ~  " There were, roughly speaking, seven stages to this establishment revolt in the U.K. against Corbyn, and the U.S. reaction to Sanders is closely following the same script:


STAGE 1: Polite condescension toward what is perceived to be harmless (we think it’s really wonderful that your views are being aired).


STAGE 2: Light, casual mockery as the self-belief among supporters grows (no, dears, a left-wing extremist will not win, but it’s nice to see you excited).


STAGE 3: Self-pity and angry etiquette lectures directed at supporters upon realization that they are not performing their duty of meek surrender, flavoured with heavy doses of concern trolling (nobody but nobody is as rude and gauche online to journalists as these crusaders, and it’s unfortunately hurting their candidate’s cause!).


STAGE 4: Smear the candidate and his supporters with innuendos of sexism and racism by falsely claiming only white men support them (you like this candidate because he’s white and male like you, not because of ideology or policy or contempt for the party establishment’s corporatist, pro-war approach).


STAGE 5: Brazen invocation of right-wing attacks to marginalize and demonize, as polls prove the candidate is a credible threat (he’s weak on terrorism, will surrender to ISIS, has crazy associations, and is a clone of Mao and Stalin).


STAGE 6: Issuance of grave and hysterical warnings about the pending apocalypse if the establishment candidate is rejected, as the possibility of losing becomes imminent (you are destined for decades, perhaps even generations, of powerlessness if you disobey our decrees about who to select).


STAGE 7: Full-scale and unrestrained meltdown, panic, lashing-out, threats, recriminations, self-important foot-stomping, overt union with the Right, complete fury (I can no longer in good conscience support this party of misfits, terrorist-lovers, communists, and heathens). "
So what stage are we entering now on the verge of the Iowa and New Hampshire primaries and Greenwald delivers his ominous verdict ~


"Britain is well into Stage 7, and may even invent a whole new level (anonymous British military officials expressly threatened a “mutiny” if Corbyn were democratically elected as prime minister). The Democratic media and political establishment has been in the heart of Stage 5 for weeks and is now entering Stage 6. The arrival of Stage 7 is guaranteed if Sanders wins Iowa."
See Greenwald RSN report ~ http://readersupportednews.org/opinion2/277-75/34744-the-seven-stages-of-establishment-backlash-corbynsanders-edition

Political Change, like climate change, is upon us and there is no painless path to transformation ~ for it involves letting go of the past and embracing the future ~ which both individually and politically is not an easy task. In that sense, both Sanders and Corbyn are needed catalysts for change.

“The power of a bold idea uttered publicly in defiance of dominant opinion cannot be easily measured. Those special people who speak out in such a way as to shake up not only the self-assurance of their enemies, but the complacency of their friends, are precious catalysts for change.” ~ Howard Zinn, You Can't Be Neutral on a Moving Train: A Personal History of Our Times