FUKUSHIMA IS HERE TO STAY 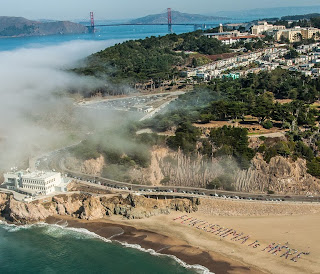 Hundreds of volunteers spell out the obvious to an apathetic world.

Like a relentless invisible creeping fog, Fukushima's poisonous presence is already here on the West Coast and it won't go away. This ongoing ominous radiation threat will be impossible to ignore by 2014 and its effect could double within five years when its life threatening symptoms will begin to surface: Allen L Roland

The map below comes from the Nuclear Emergency Tracking Center and it shows that Fukushima radiation levels at radiation monitoring stations all over the United States are rising and particularly on the West Coast ~ for every day 300 tons of radioactive water from Fukushima is flushed into the Pacific Ocean and is building up in our food chain. 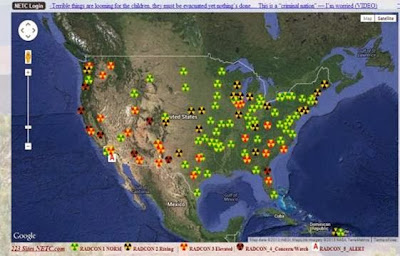 "Right now the world face a terrifying  crisis.”  But are you terrified? Am I? No, we’re not.  Perhaps we will be after the fact, sometime between a catastrophic onset and dealing with our own eventual physical decline from exposure."  Harvey Wasserman

Since I live on the West Coast, I am especially concerned about the slow buildup of radiation and the corresponding slowdown of meaningful information from the Main Stream Press about this growing threat to our national health.

Make no mistake about my intent to shock you into concern and action ~ here are 25 indications that the West Coast is being baked alive by radiation from Fukushima. (courtesy of Pakalert Press)

1. Polar bears, seals and walruses along the Alaska coastline are suffering from fur loss and open sores
2.There is an epidemic of sea lion deaths along the California coastline
3. Along the Pacific coast of Canada and the Alaska coastline, the population of sockeye salmon is at a historic low
4. Something is causing fish all along the west coast of Canada to bleed from their gills, bellies and eyeballs.
5. A vast field of radioactive debris from Fukushima that is approximately the size of California has crossed the Pacific Ocean and is starting to collide with the west coast.
6. It is being projected that the radioactivity of coastal waters off the U.S. west coast could double over the next five to six years
7. Experts have found very high levels of cesium-137 in plankton living in the waters of the Pacific Ocean between Hawaii and the west coast
8. One test in California found that 15 out of 15 Bluefin tuna were contaminated with radiation from Fukushima
9. Back in 2012, the Vancouver Sun reported that cesium-137 was being found in a very high percentage of the fish that Japan was selling to Canada…
• 73 percent of mackerel tested
• 91 percent of the halibut
• 92 percent of the sardines
• 93 percent of the tuna and eel
• 94 percent of the cod and anchovies
• 100 percent of the carp, seaweed, shark and monkfish
10. Canadian authorities are finding extremely high levels of nuclear radiation in certain fish samples…
11. Some experts believe that we could see very high levels of cancer along the west coast just from people eating contaminated fish
12. BBC News recently reported that radiation levels around Fukushima are “18 times higher” than previously believed.
13. According to Tepco, a total of somewhere between 20 trillion and 40 trillion becquerels of radioactive tritium have gotten into the Pacific Ocean since the Fukushima disaster first began.
14. It has been estimated that up to 100 times as much nuclear radiation has been released into the ocean from Fukushima than was released during the entire Chernobyl disaster.
15. It is being projected that significant levels of cesium-137 will reach every corner of the Pacific Ocean by the year 2020.
16. . The immense amounts of nuclear radiation getting into the water in the Pacific Ocean has caused environmental activist Joe Martino to issue the following warning…
“Your days of eating Pacific Ocean fish are over.”
17. A study conducted last year came to the conclusion that radiation from the Fukushima nuclear disaster could negatively affect human life along the west coast of North America from Mexico to Alaska “for decades”.
18. According to the Wall Street Journal, it is being projected that the cleanup of Fukushima could take up to 40 years to complete
19. It is being projected that the entire Pacific Ocean will soon “have cesium levels 5 to 10 times higher” than what we witnessed during the era of heavy atomic bomb testing in the Pacific many decades ago.
20. The Iodine-131, Cesium-137 and Strontium-90 that are constantly coming from Fukushima are going to affect the health of those living the the northern hemisphere for a very, very long time.  Just consider what Harvey Wasserman had to say about this… " Iodine-131, for example, can be ingested into the thyroid, where it emits beta particles (electrons) that damage tissue. A plague of damaged thyroids has already been reported among as many as 40 percent of the children in the Fukushima area. That percentage can only go higher. In developing youngsters, it can stunt both physical and mental growth. Among adults it causes a very wide range of ancillary ailments, including cancer.
Cesium-137 from Fukushima has been found in fish caught as far away as California. It spreads throughout the body, but tends to accumulate in the muscles.
Strontium-90’s half-life is around 29 years. It mimics calcium and goes to our bones."

Harvey Wasserman: World Action Now on Fukushima ~ "The amounts of radiation we are talking about here are lethal on a global scale"  9 minute video  http://www.commondreams.org/video/2013/10/10

On Monday, over 1300 residents of Fukushima took action by filing a criminal complaint against 33 people including Tokyo Electric Power Co. (TEPCO) executives and workers in government organizations saying that they are responsible for negligence over the Fukushima Daiichi nuclear plant disaster and should go to jail. See story ~ http://www.popularresistance.org/over-1300-fukushima-residents-demand-nuclear-officials-face-jail/

“There is talk of an apocalypse and I think the word is particularly well chosen. Practically everything is out of control” Gunther Oettinger/EU Energy Commissioner.