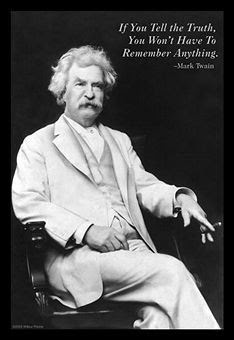 "The mania for giving the Government power to meddle with the private affairs of cities or citizens is likely to cause endless trouble, through the rivalry of schools and creeds that are anxious to obtain
official recognition, and there is great danger that our people will lose our independence of thought and action which is the cause of much of our greatness, and sink into the helplessness of the Frenchman or German who expects his government to feed him when hungry, clothe him when naked, to prescribe when his child may be born and when he may die, and, in time, to regulate every act of humanity from the cradle to the tomb, including the manner in which he may seek future admission to paradise."  Mark Twain

Here are a few of my favorite Twain quotes;

Patriotism is the last refuge of scoundrels.
On Love ~

The heart is the real Fountain of Youth. -- Notebook, 1898
When you fish for love, bait with your heart, not your brain.-- Notebook, 1898
Love is not a product of reasoning's and statistics. It just comes
none knows whence and cannot explain itself.-- Eve's Diary

On Education and the wonder of Discovery
Education consists mainly in what we have unlearned. -- Notebook, 1898
What is it that confers the noblest delight? What is that which swells a man's breast with pride above that which any other experience can bring to him? Discovery! To know that you are walking where none others have walked; that you are beholding what human eye has not seen before; that you are breathing a virgin atmosphere. To give birth to an idea ~ to discover a great thought. -- Innocents Abroad

( Note that this was exactly what I felt when I walked into a precognitive vision of the Golden Gate bridge from Fort Mason, San Francisco in 1987~ a vision that I originally had at 6 years old while living in New England ~ and KNEW in that instant that I was in a Unified Field of love and soul consciousness that existed beyond time and space and my task was to own it with the world )

CONGRESS: The only "Distinctly Native American Criminal Class".
-- from The Devil's Dictionary
"No country can be well governed unless its citizens as a body keep religiously before their minds that they are the guardians of the law, and that the law officers are only the machinery for its execution, nothing more."-- The Gilded Age
It is by the goodness of God that in our country we have those three unspeakably precious things: freedom of speech, freedom of conscience, and the prudence never to practice either of them. -- Following The Equator

"Next the statesmen will invent cheap lies, putting the blame upon the nation that is attacked, and every man will be glad of those conscience-soothing falsities, and will diligently study them, and refuse to examine any refutations of them; and thus he will by and by convince himself that the war is just, and will thank God for the better sleep he enjoys after this process of grotesque self-deception."
...The Mysterious Stranger

"Man is the only animal that deals in that atrocity of atrocities, War. He is the only one that gathers his brethren about him and goes forth in cold blood and calm pulse to exterminate his kind. He is the only animal that for sordid wages will march out ... and help to slaughter strangers of his own species who have done him no harm and with whom he has no quarrel .... And in the intervals between campaigns he washes the blood off his hands and works for "the universal brotherhood of man" ~ with his mouth"

Change is the handmaiden Nature requires to do her miracles with. -- Roughing It

But it was The Adventures of Tom Sawyer that revealed the childlike wondrous heart that existed within Mark Twain as well as his profound connection to nature ~ and his words touched the innocent and adventurous hearts of millions, including myself, who also sensed the miracles that Tom Sawyer witnessed ~ “It was the cool gray dawn, and there was a delicious sense of repose and peace in the deep pervading calm and silence of the woods. Not a leaf stirred; not a sound obtruded upon great Nature's meditation ~ Gradually the cool dim gray of the morning whitened, and as gradually sounds multiplied and life manifested itself. The marvel of Nature shaking off sleep and going to work unfolded itself to the musing boy ~ All Nature was wide awake and stirring, now; long lances of sunlight pierced down through the dense foliage far and near, and a few butterflies came fluttering upon the scene.” Adventures of Tom Sawyer
Here's the trailer for the original Adventures of Tom Sawyer in 1938 ~ two minute video   https://www.youtube.com/watch?v=TbFzmQIw4ok

Now Journey to Arrow Rock Missouri for an old fashioned 4th of July celebrating the 35th Anniversary of the filming of the Hollywood classic, "The Adventures of Tom Sawyer". Actors Johnny Whitaker and Jeff East recall what it was like to play Tom and Huck in the great outdoors of central Missouri. Uploaded on Jun 30, 2010 / 3 minute video http://www.youtube.com/watch?v=Gy__o_TbMGg

Happy Independence day but as Mark Twain wrote ~ The less there is to justify a traditional custom, the harder it is to get rid of it -- Adventures of Tom Sawyer

Allen L Roland is a practicing psychotherapist, author and lecturer who also shares a daily political and social commentary on his web log and website allenroland.com He also guest hosts a monthly national radio show TRUTHTALK on www.conscioustalk.net
Posted by Allen L Roland, Ph.D at 3:31 PM