TOO LOW AND TOO SLOW / SF COMMERCIAL PLANE CRASH 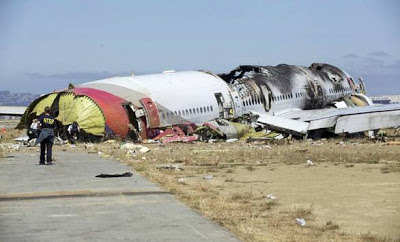 As a former Navy carrier pilot, I am acutely aware of the importance of the thrust, power and drag curve when landing. It appears, as the enclosed videos indicate, that the pilots realized too late that the commercial aircraft was too low and too slow to add power and gain altitude before the recent tragic crash at SF International airport: Allen L Roland

Having landed commercially at SF Airport countless times over the years, there is a few minute approach to the airport over water before landing which always reminds me of landing on the carrier as a Navy interceptor carrier pilot in the early 1960's.

As a Navy pilot, with over 150 all-weather landings, I was constantly aware of the thrust, power and drag curve as I maneuvered the plane for a landing on the carrier ~ always aware that if I got too low and too slow, the bottom would fall out of my ability to gain altitude by adding power, drag would prevail and the plane would stall and fall like a rock.

This is apparently what happened at SF International a few days ago seconds before the commercial aircraft struck the ground as the enclosed video clearly shows and the cockpit recorder apparently indicates. The crash survivor comments also indicate that the aircraft was too low and too slow to gain precious altitude and overcome drag in the last few seconds before the crash. Voice recorder reveals that seven seconds before the plane hit into a seawall, one of the crew members called on the pilots to increase speed. Information from the flight data recorder said the plane was going well below the target landing speed, and the engine throttles advanced. Four seconds before impact, a “stick shaker” ~ a device that emits an oral and physical warning to the crew that the plane is about to stall ~ sounded off, NTSB Chairman Deborah Hersman said. You can well imagine the panic of the flight crew when the application of full power had no effect on altitude ~ for they had apparently passed the bottom of the thrust, power and drag curve and they stalled. Read more information on accident: http://www.foxnews.com/us/2013/07/08/boeing-777-crashes-at-san-francisco-international-airport/#ixzz2YTthpOgl

Here's an eyewitness report and video of the actual crash and a strong indication that the pilot was probably too low and too slow and vainly tried to abort the landing ~  two minute video  https://www.youtube.com/watch?v=SY_yA7eJXpE

And here crash survivor (Eugene Rah) comments on the last few moments of the flight and his awareness that the aircraft was too low and too slow and how he braced himself before the crash ~ http://www.cnn.com/video/?/video/us/2013/07/07/vo-plane-sf-plane-crash-on-cam.courtesy-fred-hayes#/video/us/2013/07/07/nr-sf-plane-crash-survivor-eugene-rah.cnn

"Flying is hours and hours of sheer boredom punctuated by seconds of stark terror." ~ Ernest Gann / Fate Is The Hunter