MICKELSON'S BRITISH OPEN TRIUMPH IS THE STUFF OF LEGENDS 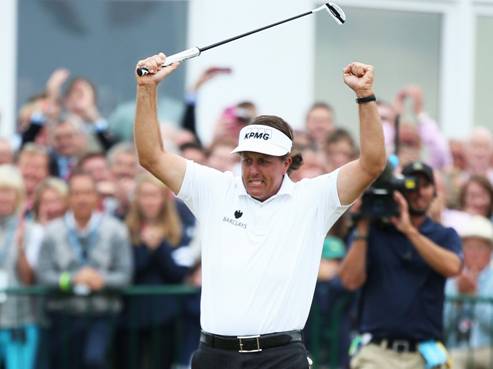 Last weekend I was glued to the TV early in the morning as I watched an historic event unfold on the unyielding links of Muirfield, Scotland. Phil Mickelson, in what he declared was the best round of his storied career, birdied four of the last six holes including the 18th and won the British Open ~ the only player under par while dismantling the era of Tiger Woods in the process: Allen L Roland

Phil Mickelson climbed to the summit of the true golf legends last weekend ~ a place where Palmer, Nicklaus and Hogan dwell ~ and marked his spot with a brilliant closing round of 66 in the 2013 British Open.

Golf.com captured the historical significance ~ " By numbers alone, it was his lowest final round of a major. On a course that didn't yield a single bogey-free round all week, Mickelson only dropped a shot at the 10th hole. The scoring average for Sunday was just under 73.5. Mickelson shot 66, matching the lowest score of the tournament. It was the lowest final round ever at Muirfield, and the lowest by an Open champion since Justin Leonard shot 65 at Royal Troon in 1997.
Read more: http://www.golf.com/ap-news/muirfield-moments-and-british-open-remember#ixzz2a4LbcpuP

To appreciate the British Open, you must also appreciate links golf which is a six point test for all golfers ~ driving accuracy, putting, chipping, sand play and mental toughness under extremely difficult course conditions, which can dramatically change at any moment. Here's a six minute video of Mickelson's amazing victory while defeating the perils of Muirfield in the process  http://www.youtube.com/watch?v=RrlMPC8MDKY

As a former 6 handicap golfer and a proud winner of the Peninsula Golf and Country Club's first flight championship in the late 1960's as well as an enthusiastic former member of Arnold Palmer's Army ~ I know that golf is a demanding game where sheer determination, focus and momentum can quite often lift you on their wings to breathtaking success.

But it was mental toughness and the willingness to take chances as well as seize the moment that brought glory to Mickelson and left Westwood, Scott, Woods and others groping in the heather of Muirfield last weekend. Listen to Phil as he explains that last round on this excellent BBC Sports 6 minute video interview ~ http://www.youtube.com/watch?v=CCTI84ZyuS0

As for Tiger Woods, his day has come and gone ~ for much of his past dominance was based on fan adoration and respect which has rapidly evaporated with his obvious public arrogance and personal self-destruction. His attempt to rebuild his image has helped and he will still win some endorsements and tournaments but the fire has gone, the eyes are empty and non-trusting and he no longer commands fear in his opponents or devotion from his fans.

Which brings me to the king of the Golf legends, Arnold Palmer. Palmer was the true stuff of legends ~ joyful, swashbuckling, fearless, focused, adored by golf hackers, such as myself, and he enjoyed a mutual love relationship with his fans which not only fueled Palmer's game but put golf on the television map. Palmer's personality and presence knocked golf off the rich and elite country club shelf and brought it back to the people ~ like myself ~ who patterned my swing and putting stroke after Palmers and was a proud member of his enthusiastic and devoted army.

Palmer was above all personable and available and every time I order an Arnold Palmer ( half lemonade and half ice tea) I fondly think of this golf legend who is now a gracious and somewhat brittle 83 years old but still the king in my eyes.  See six minute video documentary on king Palmer and his effect on golf, television and the world ~
http://www.youtube.com/watch?v=NjkT3tORCV8

Phil Mickleson has taken a giant step towards the stuff of legends by winning the British Open in such dramatic fashion but his character and personality has already enlisted an army of true believers which now includes myself.

"Phil is going to go down in history as one of the great players of the game. There's no doubt about that." Jack Nicklaus