THE BATTLE OF BRITAIN ANNIVERSARY 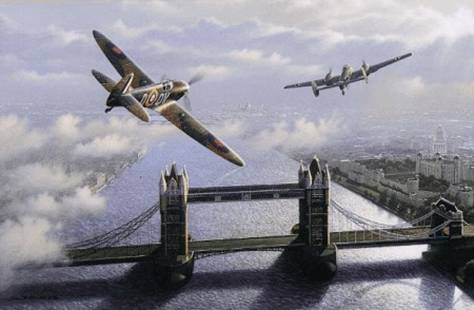 It was in early July, 1940 that Britain, armed with speedy high flying Spitfires, took to the skies to defend itself against the mighty German Luftwaffe ~ the aerial warfare branch of the indomitable German Wehrmacht during WW II ~ and in three months turned back a near certain invasion and inspired the United States into action: Allen L Roland

I was just a young child in July of 1940 but I was acutely aware of the Battle of England for the British Pathe films were being screened continually in the United States and my imagination was stirred by the out manned RAF Spitfires taking on the overwhelming force of Luftwaffe German Messerschmitt's in the skies over England. The Messerschmitt was indeed a truly formidable foe and weapon ~ see 2 minute video http://www.youtube.com/watch?v=Lc-6y0VKzcA

But the RAF Spitfire, powered by a Rolls-Royce Merlin II inline piston engine of 1175 horsepower, enjoyed a faster rate-of-climb and more agility over its adversary of that time - the Messerschmitt Bf 109E.

The war ~ known as The Battle of Britain after Winston Churchill's mention during a speech in the House of Commons ~ began on July 10th, 1940 and would encapsulate the entire summer. The RAF could only muster some 19 total Spitfire squadrons. The primary player for the German Luftwaffe during this time would become the Messerschmitt Bf 109, a single-seat, single-engine fighter tested during the Spanish Civil War and bound to create its own excellent legacy in time.

After months of deadly bombings on British soil, The Battle of Britain was officially ended on October 31st, 1940 with a decisive British air victory. The sheer will and determination of the British people took center stage alongside ready-to-fight pilots on makeshift airfields. Key to victory was the British radar and communications network which outlined bomber formations as they arrived over the Channel and thus offered the key element of surprise.

The Spitfire held only a slight edge against the equally-excellent Bf 109s, particularly in fighting under 20,000 feet. The Bf 109, conversely, held the advantage in its engine for it could send fuel from its tanks during the most aggressive of maneuvers - such was the fine line separating these two machines and pilot training and experience were truly at play in the conflict.

The Battle of Britain stands alongside some of the greatest battles in British history, such as the Battle of Waterloo and the Battle of Agincourt. It was a battle we could not afford to lose. if we had lost it we would have lost the entire war. We won it and barely ~ because of the immense courage and skill of a few hundred fighter pilots who flew against the massed might of the mighty Luftwaffe. It was truly Britain's finest hour. That is why we all celebrate every year the anniversary... of the Battle of Britain.

One RAF pilot at that time, who was also a poet, truly captured the spirit and world of high altitude Spitfire fighter pilots. 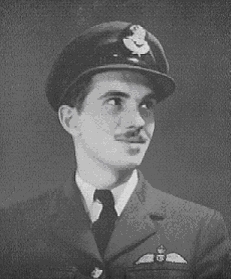 John Gillespie Magee Jr. was an American pilot and poet. He trained at Trenton, St. Catharines, and Uplands and received his wings in June 1941. His officers noted he was, "a very good pilot prospect" but, "lacks discipline" and was "somewhat overconfident." His friends remember liking him and that Magee thought he could do anything, laughed a lot, and made them laugh.( Note ~ these are Common traits for most fighter pilots who are often living on the edge )

He was sent to England for operational training in Llandow, Wales. Later that year he was posted to No. 412 Fighter Squadron, RCAF, stationed at Digby, England. The squadron operated Supermarine Spitfire aircraft flying fighter sweeps over France and participating in air defense over England against the Luftwaffe.

On 3 September, 1941, Magee flew a high altitude (30,000 feet) test flight in a new Spitfire Mk V. During the flight he was struck with the inspiration for a poem -"To touch the face of God." In a letter to his parents he wrote, "I am enclosing a verse I wrote the other day. It started at 30,000 feet, and was finished soon after I landed." On the back of the letter he had written his poem, "High Flight."

Magee was killed three months later at the age of 19 just three days after the U.S. entered the war. At an altitude of about 400 feet, his Spitfire collided in clouds with an Oxford trainer flown by Ernest Aubrey Griffin. At the inquiry afterwards, a farmer testified that he saw the Spitfire pilot struggling to push back the canopy. The pilot stood up to jump from the plane but was too close to the ground for his parachute to open and died instantly. The Oxford pilot was killed in the accident as well.

But Magee's poem High flight lived on and truly captures the intoxication of high altitude flying, of playing with the clouds and being an eagle. It also inspired me as a young man to become a Navy high altitude aviator and also dance with the clouds in footless halls of air, where never a lark nor even Eagle flew ~ and as I explored the high untrespassed sanctity of space I too felt the silent presence of God which prepared me to eventually touch the hand of God by fully surrendering to love as well as claim my small part in a Unified Field of universal love and soul consciousness.

"Oh! I have slipped the surly bonds of Earth
And danced the skies on laughter-silvered wings;
Sunward I've climbed, and joined the tumbling mirth
Of sun-split clouds, - and done a hundred things
You have not dreamed of - wheeled and soared and swung
High in the sunlit silence. Hov'ring there,
I've chased the shouting wind along, and flung
My eager craft through footless halls of air....

Up, up the long, delirious, burning blue
I've topped the wind-swept heights with easy grace
Where never lark, nor even eagle flew -
And, while with silent, lifting mind I've trod
The high untrespassed sanctity of space,
Put out my hand, and touched the face of God."