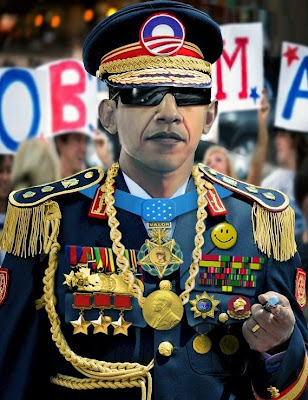 With his tarnished Nobel Peace Prize the hypocritical symbol of the broken promises of his first term ~ Emperor Obama will firmly establish the Empire in his second term while setting the stage for the New World Order: Allen L Roland

Right from Beyoncé's lip-synced National Anthem https://www.youtube.com/watch?v=L25jPoSxvBM
to Emperor Obama's teleprompter aided inauguration speech ~ this was a Hollywood production which was heavy on glitz and light on substance as well as promise for Obama II.

Make no mistake about it, the global financial elite got their man in 2008 and got him re-elected in 2012 ~ with the promise that the banksters will remain unpunished and the Military / Industrial complex will continue to drive the economy with the perpetual war of terror ~ not war on terror.

Our newly re-elected Bomber in Chief launched over 20,000 airstrikes in his first term which caused significant death and destruction from Iraq to Somalia ~ "...The Obama administration is responsible for  at least 18,274 air strikes in Afghanistan since 2009, including at least 1,160 by pilotless drones. The U.S. conducted at least 116 air strikes in Iraq in 2009 and about  1,460 of NATO's 7,700 strikes in Libya in 2011. While the U.S. military does not publish figures on "secret" air and drone strikes in other countries, press reports detail a five-fold increase over Bush's second term, with at least  303 strikes in Pakistan, 125 in Yemen and 16 in Somalia… The Obama administration has conducted more air strikes day-in day-out than the Bush administration. Bush's roughly 24,000 air strikes in seven years from 2002 to 2008 amounted to an air strike about every 3 hours, while Obama's 20,130 in four years add up to one every 1& 3/4 hours."
See report ~ http://www.alternet.org/world/bomber-chief-20000-airstrikes-presidents-first-term-cause-death-and-destruction-iraq-somalia

As Nicolas Davies ( AlterNet ) concludes ~ "Day after day for 11 years, U.S. air strikes have conclusively answered the familiar question of 9/11: "Why do they hate us?" As Congress member Barbara Lee warned in 2001, we have "become the evil we deplore." It is time to change course."

Don't count on a change of course any time soon with Obama II ~ instead count on a slow but steady move toward a New World Order ~ pre-planned some time ago and now entering an accelerated phase under Obama II ~ See 10 minute video http://www.youtube.com/watch?v=V9HJRxMjLFs

So far Obama I has brought us...
1. Universal health care
(a fraud)
2. The continuation of
torture.
3. Get-out-of-jail-free cards
for Wall Street scammers.
4. The free guns for Mexican
drug cartels program.
5. An undeclared war against Pakistani
civilians ~ through accelerated drone assassinations.
6. Prolonged Detention has become a rule of law ~ this is, by far, his biggest accomplishment to date and most certainly will be continued during the reign of Obama II and a budding New World Order ~ as explained by Rachel Maddow. 7 minute video
http://www.brasschecktv.com/page/21972.html

Friend and fellow Columnist Stephen Lendman correctly identifies Obama as the global elite's point man ~ "He’s a con man. After all the harm he caused, half the country still supports him. He gets away with murder and much more. Most people haven’t a clue. They’re out of touch. They don’t understand what harms them. They ignore their own welfare. Some perhaps don’t care. Others are dismissive. They know more about bread and circuses than vital major issues to address. Obama takes full advantage. He governs lawlessly. He’s in bed with corrupted monied interests. They own him. He plans throwing most Americans under the bus. It’s his scheme to give them more. America is more hypocrisy than democracy."
See article: http://sjlendman.blogspot.com/2013/01/obama-money-powers-point-man.html

So there you have it, Obama I was more about hypocrisy than democracy ~ and Obama II promises more of the same as we draw ever closer to a new World Order.

"The drive of the Rockefellers and their allies is to create a one-world government combining super capitalism and Communism under the same tent, all under their control.... Do I mean conspiracy? Yes I do. I am convinced there is such a plot, international in scope, generations old in planning, and incredibly evil in intent." ~ Congressman Larry P. McDonald, 1976, killed in the Korean Airlines 747 that was shot down by the Soviets

Allen L Roland is a practicing psychotherapist, author and lecturer who also shares a daily political and social commentary on his web log and website allenroland.com He also guest hosts a monthly national radio show TRUTHTALK on www.conscioustalk.net
Posted by Allen L Roland, Ph.D at 6:49 PM