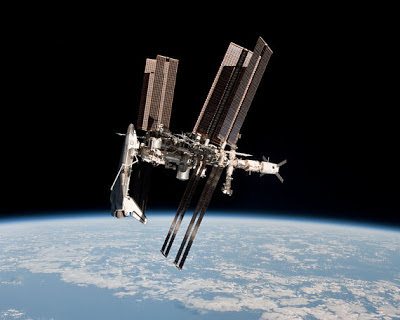 Here's a New Year's Gift for you ~ a zero G guided tour of the International Space Station by Space Station Commander Sunita Williams. The space station is a living example of International cooperation which has yet to be achieved on planet Earth ~ where America is still engaged in the longest war in US history in Afghanistan ~ but the human spirit cannot be quenched: Allen L Roland

This is one cool and informative video !

In her final days as Commander of the International Space Station, Sunita Williams of NASA recorded an extensive tour of the orbital laboratory and downlinked the video on November 18,2012.
The tour includes scenes of each of the station's modules and research facilities with a running and charming narrative by Williams of the work that has taken place and which is still ongoing aboard the orbital outpost.

Just hours later she, cosmonaut Yuri Malenchenko and Flight Engineer Aki Hoshide of the Japan Aerospace Exploration Agency departed in their Soyuz TMA-05M spacecraft for a landing on the steppes of Kazakhstan.

Meanwhile, The United States is still engaged in the longest war in US history in Afghanistan ~ which is, in reality, all about full spectrum dominance. Current count Americans killed in action in Afghanistan 2170, Total Wounded  (to 9/30/12) 17,674.

1. There is no conceivable threat in Afghanistan to any interest of the US.

2. The US objective in Afghanistan is a permanent military presence in western Asia much like the US has in Japan and Korea.

3. "Taliban" means ANYONE in Afghanistan who wants foreign occupiers out.

4. It's still all part of an ongoing megalomanic and self-defeating maniacal agenda

Happy New Year and good luck, fellow earthlings ~ we're going to need it until we learn to cooperate with one another .

However, the human spirit cannot be quenched ~ and music may just be the bridge.
11 minute video
http://www.youtube.com/watch?v=O6rgkCUstaE