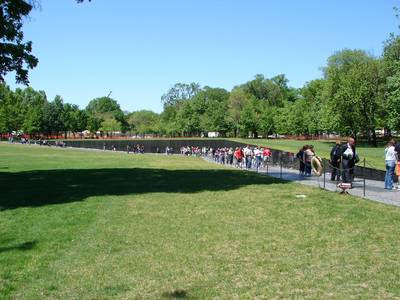 Experiencing the Vietnam Wall is a literal descent into the hell and human cost of war for as I descended from ground level into the depths of the war memorial dwarfed by the magnitude of the 58,256 names scripted on its black granite wall ~ I was profoundly filled with sadness but as I eventually ascended into the daylight it suddenly became a peace memorial and a heartfelt reaffirmation that war is no longer an option in a world that is being forced to unite or perish: Allen L Roland

The black granite memorial was completed in 1982 and receives around 3 million visitors each year. The Memorial Wall was designed by the American architect Maya Lin.

In the early 1990’s, while in Washington, DC for a speaking engagement, I visited the site but nothing could emotionally prepare me for a visit to the memorial or the shock that this war and its incredible human sacrifice was politically motivated and based on lies. Just like during the war, the names of the dead slowly appeared on my left as I descended the gentle slope to the main wall and then suddenly the scope of the carnage overcame me as scores of names became hundreds and then thousands and finally over 50,000 and the brutal truth of this unnecessary tragedy overwhelmed me as I slowly and somberly climbed back into the sunlight. 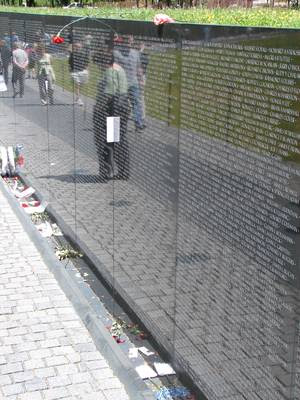 Only a musical tribute can possibly capture the emotion and feelings evoked by experiencing the Vietnam Wall ~ so here’s The Wall Song. 5 minute video http://www.youtube.com/watch?v=6y64zTRlrmo

Maya Lin’s own comments about her creation are worth noting;

“I deliberately did not read anything about the Vietnam War because I felt the politics of the war eclipsed what happened to the veterans. The politics were irrelevant to what this memorial was.”

“A lot of my works deal with a passage, which is about time. I don't see anything that I do as a static object in space. It has to exist as a journey in time.”

“I try to give people a different way of looking at their surroundings. That's art to me.”

“The definition of a modern approach to war is the acknowledgement of individual lives lost. “

“ When  I was building the Vietnam Memorial, I never once asked the veterans what it was like in the war, because from my point of view, you don't pry into other people's business. “

“You have to let the viewers come away with their own conclusions. If you dictate what they should think, you've lost it.”

Maya Lin was interviewed in San Francisco on October 24, 2008 and discussed the meaning behind her once controversial design for the Vietnam Veteran’s Memorial and her desire to go beyond Vietnam and make a universal statement about the moral futility of war itself. Two minute video ~
http://www.youtube.com/watch?v=d_V1grA-SFQ

Lin more than succeeded in her effort to create something that would both transcend Vietnam and yet touch and reconcile our injured soul by returning to nature.

Want to visit the Virtual Wall ~ First click on a state. When it opens, scroll down to the city and the names will appear. Then click on their names. It should show you a picture of the person, or at least their bio and medals. This really is an amazing web site. Someone spent a lot of time and effort to create it.  http://www.virtualwall.org/iStates.htm

“I started studying what the nature of a monument is and what a monument should be. And for the World War III memorial I designed a futile, almost terrifying passage that ends nowhere.”

Allen L Roland is a practicing psychotherapist, author and lecturer who also shares a daily political and social commentary on his weblog and website allenroland.com He also guest hosts a monthly national radio show TRUTHTALK on  www.conscioustalk.net
Posted by Allen L Roland, Ph.D at 10:42 AM