NATO / ROGUE ARM OF AMERICA'S WAR MACHINE MUST BE DISMANTLED 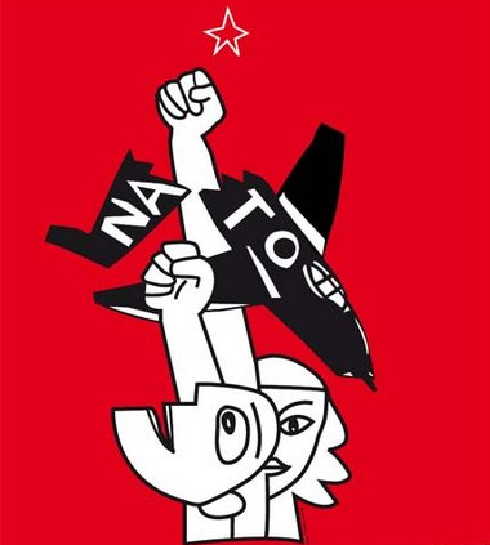 Let’s get something straight ~ NATO is the rogue arm of America’s war machine whereas it has become a global military alliance and obviously designed to engage in aggressive invasions, preemptive wars as well as collaborate with the CIA in numerous illegal activities. Don’t be fooled, America has created an unaccountable international cold war mechanism that enables it to willfully ignore and evade national and international law ~ and it must be dismantled: Allen L Roland

“To sin by silence when they should protest makes cowards of men.” ~ Abraham Lincoln

As I mentioned on Press TV earlier this year ~ The Obama administration has militarized the police force for the street protests yet to come which should reach a climax in Chicago with the two day NATO summit meetings. http://www.presstv.ir/detail/226114.html

The North Atlantic Treaty Organization (NATO) summit in Chicago was designated a National Special Security Event, which puts the Secret Service in charge of "event security"; the FBI in control of "intelligence, counter terrorism, hostage rescue and investigation of incidents of terrorism or other major criminal activities"; and the Federal Emergency Management Agency (FEMA) in charge of "recovery management in the aftermath of terrorist or other major criminal incidents, natural disasters or other catastrophic events," reported the Independent.

Chicago, under the guidance of Mayor Rahm Emanuel, has become an armed fortress. As such it is now Show and Tell time for Obama’s newly minted civilian arrest and detention laws ~ and here’s some early evidence of what’s to come:

On May 18th, a preemptive raid by the Chicago Police Department (CPD) on the home of two Occupy Chicago activists appears to have happened without a search warrant, said the National Lawyers Guild (NLG), and led to the disappearance of nine activists into police custody without charge for almost 24 hours.

“ Occupy Chicago demands the immediate release of the peaceful protesters terrorized by the Chicago Police Department in Wednesday nights raid," said Rachael Perrotta of the Occupy Chicago Press Committee in a statement.” We are getting a taste here in Chicago of what it's like to live in a militarized police state, with non-violent demonstrators targeted for expressing their First Amendment Rights and for standing up against the NATO war machine."
http://truth-out.org/news/item/9235-nato-protesters-held-without-charge-after-raid-as-chicago-steps-up-police-activities

As thousands of activists rightfully gather in Chicago now ~ expect more of the same with indefinite detention and aggressive militarized police state action while under the banner of national security. Everything will be done (or spun) to justify the heavy handed police tactics that will be seen in Chicago over the next few days.

Mayor Emanuel is spending millions entertaining NATO ~  and millions more to stifle protest at Chicago's dire levels of poverty which includes the dubious distinction of having the highest rate of black unemployment and the highest levels of black poverty ~ at 21% and 33% respectively. See article ~ http://bit.ly/KvjSS0


There is much to both question and criticize about NATO but primary is the fact that America has created an international organization that is not answerable to international or constitutional laws and is still mired in a cold war mentality.

In an awkward recent testimony before the Senate Armed Services Committee, Secretary of Defense Leon Panetta insists that the UN and NATO can provide the Administration with 'legal authority' for military action without congressional approval ~ as the generals’ nod in agreement behind him.

In fact, it would seem that Congress isn't even necessary and Panetta’s answers all but underscore this fact.

Once "legal permission" had been granted by NATO or "some kind of UN Security Council resolution," Panetta maintained, the President wouldn't need authorization from Congress. Panetta literally says that NATO operates as a rogue arm of America’s war machine and answers to no one.   7 minute Video:
http://www.brasschecktv.com/page/9770.html

Bernardine Dohrn and Bill Ayers make the same case on why they oppose NATO in The Rag Blog ~ “The new NATO is a secretive and costly instrument of war and aggression. It makes its own rules and confirms its own authority. As a tool of global intervention NATO undermines democracy and constricts citizen participation on issues of war and peace. It has no place in a democracy, and an authentic democracy should have no business with NATO.”
http://theragblog.blogspot.com/2012/04/bernardine-dohrn-and-bill-ayers-why-we.html

David Swanson also agrees in Veteran’s Today ~ “The U.S. dominated NATO holds up the past year’s war on Libya as a model for the future, with an eye on various potential victims, including Syria and Iran. In so doing, NATO serves as the armed enforcer of the exploitative agenda of the G-8, which has fled Chicago for the guarded compound at Camp David.”  http://www.veteranstoday.com/2012/05/15/veterans-for-peace-calls-for-an-end-to-nato/

The focus of the NATO summit this year is Afghanistan. “Operation Enduring Freedom,”, is now and get this, officially a NATO operation.

Another Obama straddle whereas Obama can escape Afghanistan’s ominous consequences and spread the cost and blame under the cloak of NATO. An auspicious step in the rapidly approaching New World Order.