I'LL HAVE ANOTHER WILL WIN THE TRIPLE CROWN 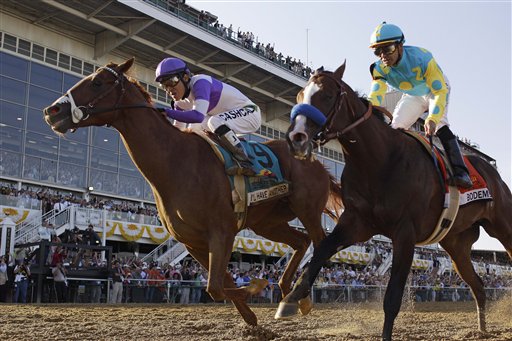 I'll Have Another (9), ridden and urged by Mario Gutierrez, beats Bodemeister, ridden by Mike Smith, to the finish line to win the 137th Preakness Stakes horse race at Pimlico Race Course, Saturday, May 19, 2012, in Baltimore.(AP Photo/Matt Slocum)

The heart of a true sports champion is always special to behold and that includes horse racing. ‘I’ll Have Another’ has just won two legs of the Triple Crown but what we are now witnessing is a rare bonding of a special horse and its jockey where they have become not only one but an unstoppable force on the race track ~ as they most certainly will be at Belmont Park on Saturday, June 9th in New York: Allen L Roland

Watch this Preakness video closely and you’ll see jockey ( Mario Gutierrez ) and horse become one as I’ll Have Another over takes Bodemeister in the stretch to win by a neck ~ but he was literally flying at the finish while Bodemeister was obviously spent. Look carefully at this Getty photo and you’ll see a horse in his jockey in perfect sync with each other. 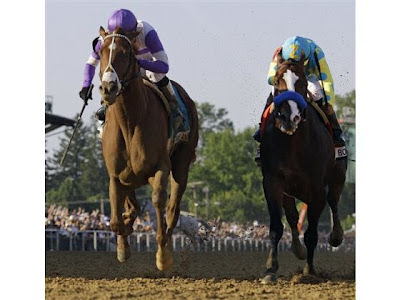 
Veteran Racing writer, Martha M Boltz, saw it the same way ~ “ With his chestnut head low, his neck extended to its maximum and those hooves flying in the dust, I’ll Have Another with Mario Gutierrez clinging to his back, added the Preakness win to his string, making him 4 for 4 on the track. And the young rider who came out of virtually nowhere (Hastings Race Track in Vancouver) a few months ago, smiled and shook his head, wiping tears from his eyes, as he said in his soft Mexican accent, “It’s not me ~ it’s all about the horse. He’s just a great horse … Sometimes in the ephemeral world of horse racing, there comes together a perfect duo, a man and a horse, with a symbiosis that is basically inexplicable. The man knows and feels the 1500 pounds under him, and the horse knows the 125 pound jockey on his back, and they work together. This was one of those days”. See article ~ http://communities.washingtontimes.com/neighborhood/sports-around/2012/may/20/ill-have-anotherand-he-did/#.T7lfhGJjkh4.email

Having owned a horse for several years in the late 1980’s ~ I can personally speak for the bond that often exists between a horse in its owner or in this case a horse in its jockey.  My horse was a Paint and his name was Scout. He was gentle and well trained but he loved to run and he knew all my verbal cues. I still fondly remember saddling up Scout and riding into the Sonoma vineyards and slowly trotting up to a quarter mile dirt road between the vineyards. Scout knew what was coming and shuddered in anticipation as I positioned him at the start of the straightaway. I verbally clucked just once with my tongue and we were off and running ~ at full stride with me clinging to his back and urging him on ~ Let’s go Scout !

Riding 1500 pounds of horse at full gallop is beyond exhilarating, it’s a bonding experience in all its glory.

And that’s my point ~ Jockey Mario Gutierrez has that same bonding connection with I’ll Have Another which will provide the deciding edge at the Belmont as well as a triple crown victory. I can definitely identify with Gutierrez who still says in awe  “He’s a wonderful horse ~ he just wait till I give him the word, and then he does it.”

Here’s an interview with a humbled Mario, who had just won the Preakness, where he confirms the joy and delight of that experience of riding a gallant 1500 pound horse that responds to your cues and wants to run. 4 minute video
http://www.youtube.com/watch?v=lt3QVMf2VhA

As David Daniels writes in Bleacher Report ~ “Horses aren’t alone when they cross the finish line. Jockeys will forever play second-fiddle to the thoroughbred, but shot callers like Mario Gutierrez deserve more credit. His ability to push the right buttons at the perfect time is what led to I’ll have Another's victory in the 2012 Kentucky Derby and Preakness Stakes.”
Tom Pedulla of USA Today reported that Steve Cauther ~ the jockey that won the last Triple Crown 33 years ago in1978 with Affirmed (and the last to do so) ~ is a huge fan of Gutierrez. He said of Gutierrez:
"They found this new kid like me in the day. They believed in him, and he can ride. He obviously fits the horse, and the horse responds to him ~ The horse definitely responds to him. I’ll Have Another concluded back-to-back Triple Crown competitions with finishes to remember. Bodemeister built a comfortable cushion between himself and I’ll Have Another each time only to have those leads evaporate. And I’ll Have Another isn’t the one flipping the switch at just the right moment ~ Gutierrez is.”    http://bleacherreport.com/articles/1190293-preakness-2012-winner-mario-gutierrez-just-as-impressive-as-ill-have-another

So there you have it, a horse with a gallant heart who loves to run and a gifted jockey who truly knows and respects his horse ~ but also knows when to turn him loose.

History will be made on June 9th when I’ll Have Another wins the triple crown and Gutierrez will be right behind his ear in the home stretch ~ urging him on as both horse and rider share their exciting and historic moment in history.

Allen L Roland is a practicing psychotherapist, author and lecturer who also shares a daily political and social commentary on his weblog and website allenroland.com He also guest hosts a monthly national radio show TRUTHTALK on  www.conscioustalk.net
Posted by Allen L Roland, Ph.D at 10:24 AM