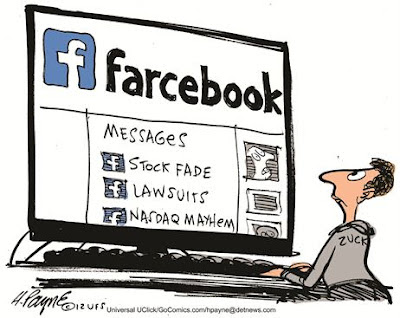 Now that the over priced Facebook IPO has come and rightfully tanked, let’s take a revealing look beneath the over-hyped illusion of the social-networking website itself ~ but more importantly what its IPO fiasco tells us about a blatantly rigged stock market, where short term greed still overrides fairness, and how we all got Zuckered : Allen L Roland

I’ve never been a big fan or advocate of Facebook although as a columnist I use it as a publishing platform among many other publishing platforms. I was asked by the producers of my monthly radio show ( Truth Talk ) to join in order to broaden their radio exposure ~ but I spend virtually no daily time on Facebook, probably know less than 10% of my so-called “friends” and have never clicked on a Facebook Ad. I’ve also spent 11 years as an Investment banker, some of it on Wall Street, and know how the Wall Street casino really works.

So anyone who is valuing Facebook by its user base is obviously counting "eye balls" that flat out do not exist.  More important...here's some extremely insightful humor, courtesy of the Onion, that sums up the short and long term prospects of Facebook in 60 seconds...
Video:
http://www.realecontv.com/page/10646.html 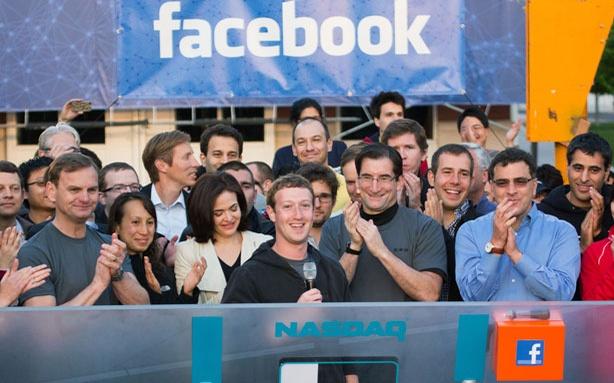 Photo of Mark Zuckerberg and his overjoyed Facebook insider friends who made Billions on an inflated bubble that rightfully tanked but at least lived up to their slogans of “Move fast and break things” and “Done is better than perfect”.

It's pretty clear now that the Facebook IPO was a fiasco. At an outrageous opening price of $38 dollars a share ~ it was 100 times earnings “among friends.”

Today it closed at approximately $26.00 dollars a share ~ a loss of millions to those who bought it at the opening price and thought it was another google. Before today, the stock has lost almost 30 percent since it started trading at $38 on May 18.

But yesterday it was also revealed that Facebook founder Mark Zuckerberg knew company shares were overpriced before the May 18 initial public offering and allegedly quietly dumped around $1 billion in shares ~ according to TMZ;

“A new lawsuit claims Mark Zuckerberg pulled a billion dollar fast one on Facebook investors," TMZ reports; "The class action lawsuit ~ filed by disgruntled Facebook shareholders ~ claims the 28-year-old CEO had inside info that the stock was grossly overvalued, and he protected his own financial hide by quickly unloading a ton of Facebook stock."
"This is the second time in two weeks a group of FB shareholders have joined together to accuse the mogul of withholding information."
TMZ did not cite any sources or specific financial details.
"The lawsuit claims Zuckerberg and his cronies hid the fact that there was a foundational flaw in the Facebook business model ~ that there was not nearly enough advertising revenue to support a stock valued at $38 a share," TMZ adds.
"The lawsuit claims Morgan Stanley, JPMorgan, and Goldman Sachs ~ all sounded the alarm before the IPO that Facebook was seriously overvalued, but that information was 'selectively disclosed' to only the largest investors."
Read more: http://www.moneynews.com/FinanceNews/Zuckerberg-Facebook-Shares-ipo/2012/06/05/id/441194

Here's one guy ( David Weidner ) who wrote 10 Reasons Not To Buy Facebook Before You Buy It Anyway ~  that got it right before hand and he’s also a user ~ but not a believer ~ who admits he probably would not pay to use it.

Here’s number 7 ~ which now looks prophetic as well as the equally relevant number 10;

7) No parents. “ Facebook, it has been said, is a two-headed company. One head is Mr. Zuckerberg, who builds the products for the users. Cheryl Sandberg, the chief operating officer, is the one responsible for making the money. She's also considered the company's unofficial grown-up, given that she is older than 40 and has worked somewhere other than the college bookstore, even if it was Google. Together, they've built a nontraditional way of doing business. No meetings. Small teams. They have unconventional mottos: "Move fast, break things" is one, and "Done is better than perfect" is another. This could be a business revolution ~ or the start of a food fight in the corporate cafeteria. “
(10) The ceiling. We may already have hit it with Facebook's valuation.
“Consider that Facebook's 88% growth rate last year was something the company acknowledged was "unsustainable." Or that 10% to 15% of revenue comes from Zynga ZNGA and other game companies that use the Facebook platform. Or everything in this list: skeptical advertisers, a young management team about to become amazingly rich, a history of social-network flameouts, deep-pocketed competition and the privacy issue…. It should give an investor pause, right?

Right, David ~ but it’s all in a day's work for Wall Street's chummy club of Investment underwriters and crooked auditors who are well versed in making stock market fantasies a reality at everyone else’s expense.

Here’s the glue that holds it all together ~ "Compliant" auditors (i.e. crooks)

Here’s how it works...Francine McKenna ( author of the Auditors ) explains on Capital Account with Lauren Lyster that Facebook’s earnings or future earnings are rightfully suspect with obvious conflicts of interest;

McKenna explains how auditors (in this case, Ernst & Young) literally cook the books and that there is more than enough reason to suspect their accounting methods. She also explains how nobody had really looked under the hood of Facebook and that CEO’s often make up there own matrix to explain away losses. This would certainly apply to a non-gap matrix where management decides and manipulates reported earnings in order to make their fantasy a reality ~ which appears to most certainly be the case with Farcebook (Facebook).

Lynn Parramore correctly writes on AlterNet what the Facebook fiasco tells us about our rigged Stock market ~ and remember I was part of that scene for over 11 years; “Why does this happen? Well, mostly because the public is playing a rigged insider game known as the stock market. Generally it goes like this: An IPO, especially one that has been hyped more than the Second Coming, makes a load of cash for a select group of inside investors, both those giving up their shares – people like the founders and the venture capitalists -- and the privileged group of banks that are underwriting the stock issue. When the ordinary investor gets to bid for shares on the stock market, the banks hope to get a big boost in the price, and sail away to their yachts with huge gains…. Facebook is scrambling to place the blame for the fumbled IPO on technical glitches at NASDAQ, but it seems that the public is not buying what they’re selling on that one. No, it looks like Zuckerberg and the underwriters were just greedy, trying to hustle as much money as possible, the public be damned.”    See article:  http://www.alternet.org/economy/155587
Matt Taibbi, Rolling Stone, definitively nails it when he writes “ I was on the phone last night with a former hedge fund CEO who was talking about this ~ "Facebook," he said, "is a colossal example of a complete clusterfuck where everybody wins except the ordinary investor." His point was that virtually every week now we see stories like this that hint at a kind of two-tiered market system in which most of the real action takes place inside an unregulated black-box network of connected insiders who don’t disclose their relationships or their interests, while everyone else, i.e. the regular suckers, live in the more tightly-policed world of prospectuses and quarterly reporting and so on.”
See The Facebook IPO Clusterf**k
http://readersupportednews.org/opinion2/279-82/11583-the-facebook-ipo-clusterfk

So there you have it, Facebook tanked and what really happened is the public got Zuckered ~ and get this ~ many of those laughing faces at Farcebook obviously knew it.