AND WE THOUGHT WE WERE FREE 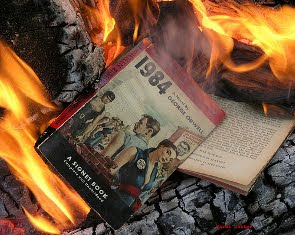 Slowly but surely the fear driven Orwellian noose closes as our civil liberties and freedoms, which were once taken for granted, are gradually restricted or ended and always for the same reason ~ National Security and the never ending War on Terror: Allen L Roland

George Orwell's 1984 revealed that the key to social control is a never ending war, such as Iraq, Afghanistan and the so-called War on Terror; for it keeps the masses fearful, silenced and obedient while their freedom and civil liberties gradually vanish. And then we begin to see things like this ~

Suspect Everyone / We have almost reached a state of 1984 surveillance that treats everyone as a potential suspect.

30 Second Homeland Security Video The Drop Off - If You See Something, Say Something. http://www.informationclearinghouse.info/article28872.htm

In that regard, as I watch the TSA security fiasco unfold as well as George W Bush and Dick Cheney’s recent book tours ~ where they rationalize their illegal wars and economic rape of Iraq and Afghanistan as well as justify torture as a means to this criminal end ~ I immediately think of Milton Mayer’s classic THEY THOUGHT THEY WERE FREE (The Germans 1933 – 1945).

For German exceptional-ism in the 1930’s was really not too different, in many ways, than American exceptional-ism in the last decade and we are very likely headed for the same disastrous fate ~ particularly regarding fading civil rights and liberties and the real consequences of the recently renewed Patriot Act . (See "Are You a Terrorist?” Extra! 11-12/01, http://www.fair.org/extra/0111/usa-patriot.html.)

“The legal definition of "terrorism" is crucial because the USA PATRIOT act gives law enforcement broad new powers to be used against "terrorist" individuals and groups. The American Civil Liberties Union (10/23/01) warns that this new definition will “sweep in people who engage in acts of political protest” if those acts could be deemed dangerous to human life. Actions which damage property or endanger people were already illegal~ reclassifying these offenses as “terrorist” while removing judicial checks on law enforcement is a recipe for the political prosecution of dissent.”

Let’s talk about our rapidly disappearing Civil Liberties and the fact that protecting individual rights and liberties has been at the very bottom of the totem pole for the Obama administration as it was with the Cheney/Bush administration. President Obama has blatantly not only failed to close Guantanamo Bay, as he promised, but has continued warrant less surveillance and military tribunals and still exercises his Bush inherited right to kill US citizens that he views as terrorists ~ as witness the recent drone assassination of American born US citizen Al Awlaki on September 30th in Yemen.

Please note that no effort was made to indict Al Awlaki for any crimes despite ( a report last October that the Obama administration was “considering” indicting him). Despite substantial doubt among Yemen experts about whether he even had any operational role in Al Qaeda, despite the fact that no evidence (as opposed to unverified government accusations) was presented of his guilt.

As such, this assassination of a US citizen is an act of intimidation (meant to send a message to the masses) and the fall out is always increased warnings and then a decrease in civil liberties and freedom. (Reuters) - The State Department issued a worldwide travel alert on Saturday warning of the possibility of anti-American attacks in response to the killing of two top al Qaeda members, including Al Awlaki.

Remember, this extrajudicial assassination of an American citizen was carried out by our Nobel Peace Prize winner ~ President Barack Obama. In that regard, Jonathan Turley, LA Times, feels that President Obama may be the most disastrous president in our history in terms of civil liberties;

“Protecting individual rights and liberties - apart from the right to be tax-free - seems barely relevant to candidates or voters. One man is primarily responsible for the disappearance of civil liberties from the national debate, and he is Barack Obama. While many are reluctant to admit it, Obama has proved a disaster not just for specific civil liberties but the civil liberties cause in the United States… Soon after his election, various military and political figures reported that Obama reportedly promised Bush officials in private that no one would be investigated or prosecuted for torture. In his first year, Obama made good on that promise, announcing that no CIA employee would be prosecuted for torture. Later, his administration refused to prosecute any of the Bush officials responsible for ordering or justifying the program and embraced the "just following orders" defence for other officials, the very defence rejected by the United States at the Nuremberg trials after World War II.” Read the full article ~ http://readersupportednews.org/opinion2/275-42/7663-focus-obama-a-disaster-for-civil-liberties

But Turley makes the valid point that the seeming liberal indifference to Obama’s betrayal of civil rights and liberties could well be a classic case of the Stockholm Syndrome ~ in which the hostage bonds with his captor despite the obvious threat to his existence much as Germany once did to Hitler’s persona and fascism in the midst of an economic depression;

“Even though many Democrats admit in private that they are shocked by Obama's position on civil liberties, they are incapable of opposing him. Some insist that they are simply motivated by realism: A Republican would be worse. However, realism alone cannot explain the utter absence of a push for an alternative Democratic candidate or organized opposition to Obama's policies on civil liberties in Congress during his term. It looks more like a cult of personality. Obama's policies have become secondary to his persona.”

Mayer’s book describes the slow but sure seduction of the German people as their civil liberties, freedoms and moral values were gradually stripped away by Hitler’s fascist government while waving the flag of national security and patriotism.

But Then It Was Too Late ~ "What happened here was the gradual habituation of the people, little by little, to being governed by surprise; to receiving decisions deliberated in secret; to believing that the situation was so complicated that the government had to act on information which the people could not understand, or so dangerous that, even if the people could not understand it, it could not be released because of national security. And their sense of identification with Hitler, their trust in him, made it easier to widen this gap and reassured those who would otherwise have worried about it … this separation of government from people, this widening of the gap, took place so gradually and so insensibly, each step disguised (perhaps not even intentionally) as a temporary emergency measure or associated with true patriotic allegiance or with real social purposes. And all the crises and reforms (real reforms, too) so occupied the people that they did not see the slow motion underneath, of the whole process of government growing remoter and remoter.”

Apathy increases with each measured step, as it most certainly has in America, and Mayer knowingly describes the consequences for Germany in the early 1930’s~

Pg 171 THEY THOUGHT THEY WERE FREE

“In between come all the hundreds of little steps, some of them imperceptible, each of them preparing you not to be shocked by the next. Step C is not so much worse than Step B, and, if you did not make a stand at Step B, why should you at Step C? And so on to Step D ~ and one day, too late, your principles, if you were ever sensible of them, all rush in upon you. The burden of self-deception has grown too heavy, and some minor incident, in my case my little boy, hardly more than a baby, saying 'Jewish swine,' collapses it all at once, and you see that everything, everything, has changed and changed completely under your nose. The world you live in ~ your nation, your people ~ is not the world you were born in at all. The forms are all there, all untouched, all reassuring, the houses, the shops, the jobs, the mealtimes, the visits, the concerts, the cinema, the holidays. But the spirit, which you never noticed because you made the lifelong mistake of identifying it with the forms, is changed. Now you live in a world of hate and fear, and the people who hate and fear do not even know it themselves; when everyone is transformed, no one is transformed. Now you live in a system which rules without responsibility even to God. The system itself could not have intended this in the beginning, but in order to sustain itself it was compelled to go all the way… You have accepted things you would not have accepted five years ago, a year ago, things that your father, even in Germany, could not have imagined … Suddenly it all comes down, all at once. You see what you are, what you have done, or, more accurately, what you haven't done (for that was all that was required of most of us: that we do nothing).” Read article ~ http://www.thirdworldtraveler.com/New_World_Order/TheyThoughtTheyWereFree.html

And that is Mayer’s main point ~ it is the spirit that dramatically changes when we accept if not condone the disintegration of our national moral values and civil liberties through illegal wars and occupations as well as our crimes against humanity such as torture, secret renditions as well as intrusive full body scans and pat downs, which will continue to be extended under the pretext of national security and the War on Terror.

Paul Craig Roberts correctly writes that the War on Terror is a Hoax; “In the past decade, Washington has killed, maimed, dislocated, and made widows and orphans millions of Muslims in six countries, all in the name of the “war on terror.” Washington’s attacks on the countries constitute naked aggression and impact primarily civilian populations and infrastructure and, thereby, constitutes war crimes under law. Nazis were executed precisely for what Washington is doing today.” http://www.informationclearinghouse.info/article29273.htm

Then what was is the Obama/Biden administration so afraid of?

They are obviously afraid of the Truth and, in particular, an informed public in possession of the truth. And the truth is that we are owned, lock, stock, and barrel by Wall Street and the Corpocracy and Washington is in bed with them.

And we thought we were free but, in reality, like the Germans in the 30’s, we are being manipulated and conditioned by fear to slowly give up our rights, liberties, guns and freedom ~ and all in the name of National Security and the never ending war on terror.

"What do we mean by the Revolution? The war? That was no part of the revolution; it was only an effect and consequence of it. The revolution was in the minds of the people, and this was effected from 1760 – 1775, in the course of fifteen years, before a drop of blood was shed at Lexington.” – John Adams, Letter to Thomas Jefferson, August 24, 1815