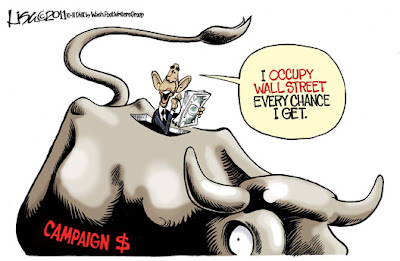 President Obama is in deep re-election trouble, for not only do the majority of Americans not trust the global elite and Wall Street but that mistrust also extends to Obama ~ whose re-election campaign pockets are lined with ongoing donations from his corporate base. In essence, American taxpayers are being ripped off by Wall Street and Obama is being paid off to look the other way: Allen L Roland

It was Aleksandr Solzhenitsyn who wrote ~ “You can have power over people as long as you don't take everything away from them. But when you've robbed a man of everything, he's no longer in your power."

America has been looted by Wall Street, the Banking Barons and the Corporate oligarchy but a staggering Main Street, robbed of everything, is rapidly arising from their stupor, awakened by the Internet, and are beginning to demand truth and transparency ~ the first important steps toward freedom, true democracy and the resurrection of the fifth Estate ( the people).

Let’s face it, Obama was the perfect Manchurian Candidate ~ willingly seduced by the global elite and Wall Street while waving the banner of change to an angry electorate longing for a change in moral direction from a decade of abuses of power by the Cheney/Bush administration.

As such, most of the anger felt by the throngs of people who are occupying not only Wall Street but hundreds of cities throughout America is honest anger towards Obama for not only not delivering on his promises but obviously selling out to Wall Street.

There are many, besides myself, who deeply feel this moral betrayal which virtually guarantees Obama will be a one term president. In The Price of Civilization, Jeffrey Sachs turns his sights on his own country, the U.S., which he believes is in peril. “The American economy,” he writes, “increasingly serves only a narrow part of the society, and America’s national politics has failed to put the country back on track through honest, open, and transparent problem-solving. Too many of America’s elites ~ among the superrich, the CEOs, and many of my colleagues in academia ~ have abandoned a commitment to social responsibility. They chase wealth and power, the rest of society be damned.”

Sachs, like many of us, feels let down by Barack Obama​. “The President,” he says, “has continued down the well-trodden path of open-ended war in Afghanistan, massive military budgets, kowtowing to lobbyists, stingy foreign aid, unaffordable tax cuts, unprecedented budget deficits, and a disquieting unwillingness to address the deeper causes of America’s problems.”

The first step in solving the deep causes of America’s problems is revealing the truth ~ particularly regarding Wall Street and Obama’s cynical financial reform Act of 2010.

Author and Investigative analyst Webster Tarpley was interviewed on July 13, 2010 by RT on the Obama administration’s scam financial reform package ~ and now we have witnessed the truth of Tarpley’s comments and financial forecast. Tarpley rightfully called Obama’s watered down financial reform package a “macabre joke” which, get this, has a 12 year built in delay for the implementation of its dubious recommendations. Obviously, a political ploy to placate Obama’s corporate base. Tarpley calls Obama “a Wall Street Puppet” and in this video provides the proof ~ Must see seven minute video ~ http://www.youtube.com/watch?v=krwOKvWFcDQ

Without direction and specific demands the Occupy Wall Street protests are vulnerable to being hijacked by groups and organizations that are, themselves, creatures of Wall Street ~ which includes the Obama re-election campaign. Opportunists lie in wait and jump at chances to muddy the message or even redirect and steer the move in their direction ~ but already some of their strident demands are being worked on in Congress.

Here are six proposals, based on these demands, that Senator Bernie Sanders (VT) is already working on;

Obama is the tip of the Wall Street iceberg because he is not only playing the same greed game for his re-election but is actively protecting his corporate base which Americans are rebelling against. As such, Americans must face the difficult truth that President Obama has not only betrayed his campaign promises but also the constitution and has become, in the process, both the executive dictator and decider in chief ~ as seen with his recent summary execution of an American citizen.

Ralph Nader calls the recent Al-Awlaki assassination “ The most radical and anti-American position that can be imagined ~ We’d better get worried “ See ten minute Project Censored interview where Ralph Nader speaks candidly on a range of subjects including media censorship, rigged elections, the hijacking of the Tea Party...Obama as the decider and, of course, the summary execution of American citizens by the President. 12 minute Video: http://www.brasschecktv.com/page/5276.html

And worried we well should be as Americans take to the streets and finally demand the change we voted for three years ago ~ change that Obama never delivered. The people’s revolt will go through three stages ~ 1. Occupy and Establish a Presence, 2. Demand the Change and finally 3. Strike and Dismantle the Oppressive Machine. The words of Mario Savio seem appropriate again ~

“There’s a time when the operation of the machine becomes so odious ~ makes you so sick at heart ~ that you can’t take part. You can’t even passively take part. And you’ve got to put your bodies upon the gears and upon the wheels, upon the levers, upon all the apparatus and you’ve got to make it stop. And you’ve indicate to the people who run it, to the people who own it, that unless you’re free, the machine will be prevented from working at all!”

The world is catching on and that includes the famed corporate raider, Asher Edelman, who explains why he supports the Wall Street Protests and how the American taxpayer is still being ripped off. 8 minute Video: http://www.realecontv.com/page/5339.html

Very soon, as the Occupy Wall Street movement goes global (Today people took to the streets in a rolling action targeting 951 cities in 82 countries from Asia to Europe, Africa and the Americas) ~ People power will come face to face with the Police State and that will ultimately strengthen the movement ~ for the fifth estate (the people) has awakened from a decades long slumber and, this time, it’s thirst for change will not be quenched by the Obama Kool aid of false promises and bogus hope.