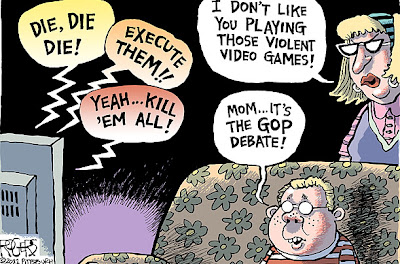 While briefly watching the Republican so-called debate, I felt I was watching the Roman games or a death duel ~ with the crowd giving a thumbs up or thumbs down to various talking points between Romney and Perry along with six other participants who will most likely never be president: Allen L Roland

The Republican Debates deserve good satire and derision. Saturday Night Live is most certainly up to this simple task ~ especially with the abundance of material that is now available. For instance, Some of the Republican presidential candidates call Social Security a “Ponzi scheme.” Some of them boast, to thunderous applause, about how many executions they’ve overseen and some of them stand smug and comfortable as their debate crowd boos a gay soldier serving in Iraq. Most of them, with the exception of Congressman Ron Paul, deserve to be ridiculed and laughed at ~ as Mark Twain well knew.

Thomas Friedman, NY Times, sets the stage by correctly nailing the duplicity of both parties in trying to reach a grand bargain ~ “If between now and November 2012 all we are going to have from our two parties is a death duel, not a grand bargain ~ Republicans blaming Obama for the bad economy and Obama running on how crazy the GOP has become ~ we will pay a very, very dear price.”

And that price we are already paying ~ but first let’s watch the GOP debate between Romney, Perry and the other six people who will most likely never be president through the satirical eyes of Saturday Night Live ~ 3 Minute Video ( Courtesy of Theresa Poulson National Journal September 26, 2011 )

“ The political and commercial morals of the United States are not merely food for laughter, they are an entire banquet “ ~ Mark Twain in Eruption