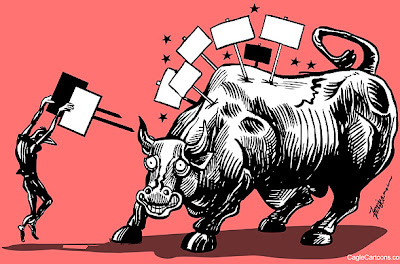 Every city that joins the Occupy Wall Street movement is another Banderilla placed in the back of a corrupt capitalistic system whose days are numbered. This movement started as a ripple, is now a wave and will soon become a people led Tsunami which will change America forever: Allen L Roland

The greater the difficulty, the more the glory in surmounting it. - Epicurus

There is something glorious in the people led Occupy Wall Street movement for it is rooted in the moral imperatives of justice, self-sacrifice and social responsibility.

The New York Times reports that a recent poll shows that 54% of Americans have a favorable impression of the Occupy Wall Street movement, which is twice the 27% who have a favorable impression of the Tea Party movement. The apparent reason is the Tea Party sees itself as stressing only individual responsibility ~ whereas the Occupation Wall Street Movement is stressing both individual and social responsibility

Chris Hedges calls it non historical values ~ “values closer to Martin Luther King than Abby Hoffman ... the movement eschews the hedonism of the New Left; indeed it does not permit drugs or alcohol in Zuccotti Park. It denounces the consumer culture and every evening shares its food with the homeless, who also often sleep in the park. But, most important, it eschews, through a nonhierarchical system of self-governance, the deadly leadership cults that plagued and ultimately destroyed the movements of the 1960s.” http://www.commondreams.org/view/2011/10/24-1

And therein lays its magnificence ~ OCW is rooted in truth, fairness and social responsibility which were once the underpinnings of our once great Republic.

We have obviously forgotten the words of Benjamin Franklin ~ " Wise and good men are, in my opinion, the strength of the state; much more so than riches and arms.”

As I stated on Press TV Saturday night ~ Occupy Wall Street will soon become Occupy America and any politician that does not heed its call for real moral and economic change, including President Obama, will be left in its wake. Occupy Wall Street is also the global elites’ greatest nightmare for their dreams of a new world order cemented in debt and controlled by the IMF and secretive Federal Reserve will also be cast aside by ripped off taxpayers as is apparently now happening in Greece ~ which could soon become Occupy Greece.

This should sound familiar ~ First, there's the media story and hymns of self-congratulations by the EU politicians.

Then there are the numbers and the details of the bail out deal.

The gap is big enough to drive a Mack truck through...

and Max Keiser does.

As Robert Reich recently wrote ~ “You don't have to be an occupier of Wall Street to conclude the Street is still out of control. And that's dangerous for all of us.”

Michael Moore correctly reports on the immensity of this OCW movement from Occupy Oakland, California ~ where he obviously grasps the collective anger of millions of Americans who are getting off the couch and making their presence felt;

Here’s Michael Moore on the Anderson Cooper Show Live from Occupy Oakland. Six minute must see video on what OCW is really all about. http://therealnews.com/t2/component/seyret/?task=videodirectlink&id=11234

Get off the couch ~ there is no change without action and action always involves risk or difficulty ~ which makes the resultant change, as Epicurus wrote, far more glorious.

As such, this is change we can finally believe in.