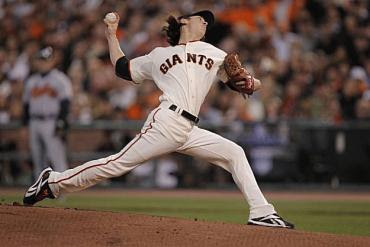 Tim Lincecum pitching in the first inning as the San Francisco Giants took on the Atlanta Braves in Game 1 of the National League Division Series at AT&T Park. Photo by Michael Maoor/ The Chonicle

For the moment, forget politics, the great recession and the mid-term elections ~ a classic baseball showdown takes place Saturday when Tim ' The Freak ' Lincecum faces stoic Roy ' Doc' Halladay in the first game of the National league Championship Series between the SF Giants and Philadelphia Phillies: Allen L Roland

In a world of growing political pretense and intrigue ~ how refreshing it is to willingly surrender to the legitimate excitement ( and torture ) of baseball playoff fever particularly when it involves my favorite team ~ the San Francisco Giants.

Most People are convinced that Roy Halladay, who pitched a no-hitter against Cincinnati in the NL Division Series opener last week, will face San Francisco ace Tim Lincecum, who has won the last two NL Cy Young Awards, in Game 1 of the National League championship series in Philadelphia on Saturday, October 16th.
It's a dream matchup, as Halladay is expected to win this year's Cy Young, and Lincecum struck out 14 in his last outing against the Atlanta Braves in the first game of the division playoffs.

As Henry Schulman, SF Chronicle staff writer wrote this week after the Giants eliminated the Braves ~ " Inside a clubhouse clinching celebration, hyperbole flows like Champagne, so maybe Aubrey Huff was a mite too exuberant as he looked ahead to Tim Lincecum vs. Roy Halladay, Matt Cain vs. Roy Oswalt and Jonathan Sanchez vs. Cole Hamels, if indeed it plays out that way. "This might be the best three pitching matchups the world has ever seen," Huff said. "It's going to be fun to watch." Read more:
http://www.sfgate.com/cgi-bin/article.cgi?f=/c/a/2010/10/12/SPGA1FRNPQ.DTL#ixzz12D8KkCGJ

The Phillies better not underestimate the " Cardiac Kids " who have become playoff hardened with their streak of one run victories and rightly believe they can beat anyone with their superior pitching, superb bullpen and timely hitting.

Look for former Marlin Cody Ross and former Phillie Pat Burrell to make a big difference along with this year's obvious rookie of the year ~ catcher Buster Posey. But Tim the 'Freak ' Lincecum will set the stage on Saturday and remember he is capable of being unhittable and most certainly will pitch two or three times during the series.

I like the schedule ~ first two in Philly where the focused Giants will definitely win atleast one. The next three are at SF where the Giants should take atleast two ~ which leaves the last two in Philly with Lincecum going again.

My prediction ~ Giants in six or maybe seven games.

But whoever survives this classic rumble will be the instant favorite to win the World Series against either the Yankees or Rangers.

My dream World Series matchup is Giants / Yankees and hopefully revenge for the Yankees 1-0 win in game seven of the 1962 World Series when Willy McCovey lined out to Bobby Richardson with Mays on third and two outs in the last of the ninth. I was in the stands that day and never forgot that moment when over 40,000 screaming Giant fans were suddenly silenced by the baseball gods.

However, Lincecum is the exuberant never-say-die face of this 2010 Giant team of castoffs and Cody Ross is the sparkplug of these cardiac kids ~ who seem destined for greatness and will seemingly not be denied in 2010.

This weblog is sustained through donations from people like yourself. Please send check or Money Order to Allen L. Roland, PO Box 1221, Sonoma,CA 95476 .

Allen L Roland is a practicing psychotherapist, author and lecturer who also shares a daily political and social commentary on his weblog and website allenroland.com He also guest hosts a monthly national radio show TRUTHTALK on http://www.conscioustalk.net/
ONLY THE TRUTH IS REVOLUTIONARY
Posted by Allen L Roland, Ph.D at 10:53 AM