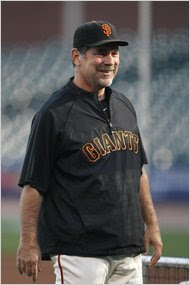 SF Manager Bruce Bochy / Leader of the torturous but driven Magnificent Misfits.
The Cardiac Kids have given their followers a combination of nervous despair and extreme exultation as they prepare to face the Texas Rangers in the World Series ~ which the Giants should win in six or seven games: Allen L Roland

And that's just what this Giant's team is ~ crazy and wild but also intentioned, focused and battle tested for their first World Series title since the Giants moved from New York in 1958.

There are several reasons why the Giants should win in six or seven games including the fact that the Rangers will not have a designated hitter in the four games in SF and their pitchers will have to finally hit and bunt like National league pitchers do every game.

The other six reasons are as follows;

Bruce Bochy. Manager Bruce Bochy out managed both Bobby Cox and Charlie Manuel in the National League playoffs, and managed the Padres in the World Series in 1998 ~ where the Padres got swept. Bochy has been here before, he wants his ring and the grizzled veteran is just as intentioned as his band of misfits.

Tim Lincecum. The Freak is the face of the cardiac kids but beneath his hippie length hair is an intentioned two time Cy Young winner whose record is 56-27 in his first four major league seasons. Lincecum has led the National league in strikeouts ( 231 ) for the third straight season and the Rangers better not take him lightly, along with Cain, Bumgarner and Sanchez.

Buster Posey. Posey won the Johnny Bench award in 2008 as the best college catcher ( Florida State ) and the Golden Spike award the same year as the nation's top amateur player. Posey is the rock of the cardiac kids and a natural field general who batted .305 with 18 homers and 67 RBI'S in 2010. Since Bochy moved him into the cleanup spot ~ Posey has batted .505 with a 21 game hitting streak and threw out 37% of those trying to steal against him. Posey is the heart of the franchise and the closest thing to Johnny Bench that I've ever seen.

Juan Uribe. Uribe's been on this stage before with the Chicago White Sox in 2005 and 2008 and brings an unbridled clubhouse presence, a .984 fielding percentage and the ability to rise to the occasion in the postseason ( 11 RBI in 25 career postseason games ~ including his game winning homerun against the Phillies in Game six ).

Cody Ross. Ross is the sparkplug for the magnificent misfits and has shown up big time in the postseason with three homers, three doubles and seven hits in 20 at bats. He is fearless and his timely hits against Lowe, Halladay and Oswalt have literally inspired his teammates to greater heights. The MVP of the NCLS will not be denied either on the field or at bat against the Rangers .

Brian Wilson. What can you say ~ the ninth inning of game six with the Phillies was a true capsule of Giant torture when the bearded one fired his favorite cutter by a frozen Howard with the bases full, a three and two count and a hostile crowd roaring. Wilson loves this stage and he plays his role to the hilt with his Mohawk haircut, black dyed beard and league leading 48 saves with 93 strikeouts in 74 innings.

Throw in Audrey Huff and veteran Pat Burrell and now you have the magnificent seven with the tenacious and determined Bruce Bochy at the helm ~ against Cliff Lee and a wide eyed Ranger manager and squad who will be fortunate to win two nail biting games.

The Wild Bunch, as Bochy often refers to his team of renegades, appear " to have caught lightning in a bottle."

My Prediction : The Giants in six, maybe seven games.