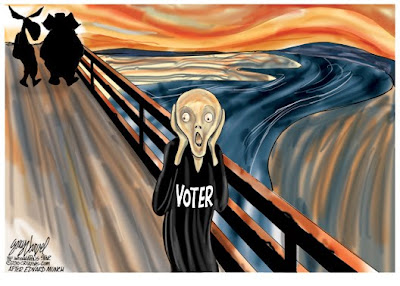 Amidst the extremist chaos of a Tea Party that is really the GOP in drag ~ obsessing about sex, abortion and religion ~ lies a genuine deep desire of Americans for a third party to effectively challenge our stagnant two party system and offer the hard truth without being beholden to special interest groups: Allen L Roland

The intelligent voter of 2010, like myself, is about to scream on having no clear choice between Democrats and Republicans and a Tea Party ~ which is really the Republican party in drag. The Tea Party has funnelled much of voters rightful anger into far right craziness such as these outrageous quotes from Tea Party candidates ~ courtesy of Devona Walker. http://blogs.alternet.org/speakeasy/2010/10/08/top-10-craziest-tea-party-quotes-of-all-time/

“The exact phrase ’separation of Church and State’ came out of Adolph Hitler’s mouth, that’s where it comes from. So the next time your liberal friends talk about the separation of Church and State, ask them why they’re Nazis.” Glen Urquhart said. He’s a tea party-backed candidate up in Delaware. He falsely claims “separation of church and state” was not in President Thomas Jefferson’s 1802 letter to the Danbury Baptist Association. He said that last April. This guy also compared abortion to slavery. He’s a real gem.

“I have been in the situation of counseling young girls… who have had very at risk, difficult pregnancies. And my counsel was to look for some alternatives, which they did. And they found that they had made what was really a lemon situation into lemonade,” said tea party-backed candidate Sharron Angle on abortion and why it should be illegal even in the case of rape or incest.

“These are beautiful properties with basketball courts, bathroom facilities, toilet facilities. Many young people would love to get the hell out of the cities,” said Carl Paladino, New York State tea party-backed candidate for Governor. He was describing his idea to transform prisons into dorms for welfare recipients. Paladino has a knack for making headlines for being, well unhinged. He threatened the life of a reporter while on camera. He also sent out a bunch of racist and pornographic emails to hundreds of political and media contacts. He’s running against New York Attorney General Andrew Cuomo. "

The vast majority of Tea Party candidates, as such, are religious extremists who are seemingly obsessed with sex, abortion and religion ~ as they feed off the anti-Obama groundswell that has already been noted in the polls. Obama's biggest ongoing mistake is to try to sell our illegal and financially draining occupation of Afghanistan as a meaningful war.

Let's make no mistake about it ~ this mid-term election is rapidly becoming a referendum on President Obama and his failed promise of transparency, truth and definitive change. Obama was obviously selected to run by the powerful financial elite, promising the public, and his progressive base, one thing and delivering another after being elected. As such, the President of the United States is the focus of a new political doctrine ~ the unitary executive ~ where the office of the president has rapidly become a law unto itself over the past ten years and the constitution, as well as separation of powers, has continued to be shredded in that process.

Both parties are seemingly beholden to special interests and I find myself longing for third party that will finally commit itself to the change we voted for in 2008.

Thomas Friedman, New York Times columnist, nailed it last Tuesday in his article FROM THE DIVIDE, A THIRD PARTY RISES ~ when he correctly predicted ~ " Barring a transformation of the Democratic and Republican parties there is going to be a serious third party candidate in 2012 with a serious political movement behind him or her ~ one definitely big enough to impact the election's outcome."

Excerpts: " There is a revolution brewing in the country, and it is not just on the right wing but in the radical center. I know of at least two serious groups, one on the East Coast and one on the West Coast, developing “third parties” to challenge our stagnating two-party duopoly that has been presiding over our nation’s steady incremental decline.... “We basically have two bankrupt parties bankrupting the country,” said the Stanford University political scientist Larry Diamond. Indeed, our two-party system is ossified; it lacks integrity and creativity and any sense of courage or high-aspiration in confronting our problems... We simply will not be able to do the things we need to do as a country to move forward “with all the vested interests that have accrued around these two parties,” added Diamond. “They cannot think about the overall public good and the longer term anymore because both parties are trapped in short-term, zero-sum calculations,” where each one’s gains are seen as the other’s losses. We need a third party on the stage of the next presidential debate to look Americans in the eye and say: “These two parties are lying to you. They can’t tell you the truth because they are each trapped in decades of special interests. I am not going to tell you what you want to hear. I am going to tell you what you need to hear if we want to be the world’s leaders, not the new Romans.”
http://www.pressdemocrat.com/article/20101005/OPINION/101009773

It may well be wishful thinking and perhaps our currupted two party political system is too far beyond repair ~ but I join Thomas Friedman in his call for a serious third party candidate for 2012 who will not only tell us the truth but will make his or her only special interest the well being of the people of the United States.