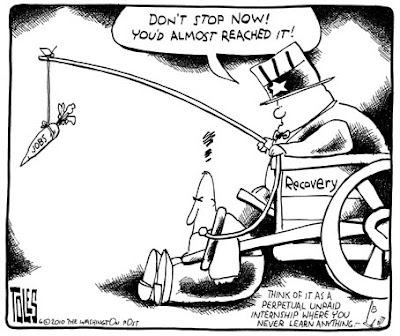 I've always believed that satire or parody is sometimes the best medium to illuminate the truth and Obama's current finance reform package begs for a ride on that wagon : Allen L Roland
The House and Senate are expected to vote on the final sleight of hand version of the highly suspect "financial reform" bill ( HR 4173 ) this week ~ which is really a victory for Wall Street who obviously have powerful friends in both houses of Congress as well as a friend at the White House. For example, top US banks could be given until 2022 to comply with the so-called Volcker rule, which is supposed to restrict financial institutions' riskier trading activities.

Meanwhile, "Fifty-five percent of Americans in the labor force have experienced a job loss, a pay cut, or a reduction in hours since the onset of the Great Recession in 2007," a new survey finds. Personal debt is at an all time high as Main Street struggles to survive.

The federal debt will represent 62 percent of the nation's economy by the end of this year, the highest percentage since just after World War II, according to a long-term budget outlook the nonpartisan Congressional Budget Office released yesterday.
Let's make it simple ~
The financial debt crisis was caused by these three principle factors ~
1.The Federal Reserve keeping interest rates artificially low.
2. The Federal Reserve inflating the money supply to satisfy Congress's deficit spending.
3. Government policies encouraging or forcing financial institutions to issue credit to undeserving people
Together, those policies caused the sub-prime mortgage crisis and the easy money debt bubble. The result was our current deepening Depression ~ masked as a Recession.
The toothless Obama-Dodd-Frank bill does nothing to address these debt problems ~ and instead insures the appearance of another mad money debt bubble which benefits only Wall Street.
In the spirit of gratitude, Wall Street has sent a letter to President Obama and his Congressional friends ~ courtesy of Dean Baker / Truthout. http://www.truth-out.org/wall-street-congratulates-washington-a-job-well-done60845
Dear President Obama and Congressional friends,
We want you know how much we value the support of the leadership of both political parties in your efforts to ensure that we did not suffer from the crisis that we ourselves created. As you recall, back in the fall of 2008, our banks were flat on their backs. If you had not rushed to our rescue with trillions of dollars in loans and guarantees from the Fed and the Treasury at a time where no sane investor would talk to us, most of us would be among the unemployed today. Instead, our banks are hugely profitable and we're happy to say that bonuses are again hitting record highs.
While this is the sort of support that we expect in exchange for our generous campaign contributions, we are especially impressed how you have managed to so effectively blunt any backlash from the public. After all, with the unemployment rate still near double-digit levels, millions of people facing the loss of their homes and tens of millions seeing their savings wiped out, there is naturally considerable anger. However, you have managed to deftly deal with this problem by diverting their attention elsewhere.
Instead of people being angry at us for the billions that we are pocketing while the economy is still in the tank, you have managed to make scapegoats out of the unemployed. At a time when there are five unemployed workers for every job opening, you have been able to whip up public resentment over unemployment benefits that average $300 a week (a few minutes' pay for us ~ chuckle ). This is truly skillful politics.
We were also impressed to see that you are taking steps to have the government punish people who default on their mortgage loans to us. Just because we are enormously rich and have huge banks doesn't mean that we know what we are doing when we issue a mortgage. We didn't think about things like the housing bubble when we issued a lot of those mortgages back in the boom. As a result, we lost a lot of money. We stand to lose even more if people keep defaulting - even when they are able to pay back our loans (sometimes referred to as a "strategic default").
Therefore, we appreciate your actions to have the government punish borrowers who default. By telling defaulters that they will not be able to have future mortgages insured by the Department of Housing and Urban Development or purchased by Fannie Mae, you are helping us squeeze more money out of these homeowners. This must be especially difficult since we know how much pressure there is on many of you to actually be helping the homeowners. But you folks have had the courage to stand with us even as foreclosures are continuing at a near record pace. We appreciate this.
And now, you have decided to put cuts to Social Security at the center of your agenda. This really takes courage. Here is a program that people have paid for with their taxes. This tax will be sufficient to fully fund benefits for the next 33 years, according to the Congressional Budget Office, and even after that date it could indefinitely pay more than 70 percent of scheduled benefits, assuming no changes are ever made to the program. This means that current and near retirees have already paid for their Social Security benefits.
But you're going to cut Social Security benefits anyhow. And this is even after the collapse of the housing bubble and the resulting downturn wiped out most of the housing equity of the baby boomers and much of the value of their 401(k)s. Frankly, under the circumstances, we wouldn't have been surprised if you were talking about increasing Social Security benefits. But, we're absolutely delighted to see you moving forward with plans for cuts. This will mean that we won't have to be taxed to repay the bonds held by the trust fund.
And, of course, there is the financial reform bill. You killed any plans to break up too big to fail banks (leaving us with huge government subsidies) and kept any talk of a financial speculations tax from being taken seriously.
Keep up the great work; we'll remember you at campaign contribution time.
Best wishes,
Your Buddies ~ The Wall Street CEOs
To top this all off ~ The Democrats have just dropped the $19 billion dollar assessment on large banks and hedge funds, to pay the administrative costs of the legislation ~ in order to appease Republicans and blue dog Democrats and ensure passage of this disgraceful sellout to Wall Street.

Allen L Roland is a practicing psychotherapist, author and lecturer who also shares a daily political and social commentary on his weblog and website allenroland.com He also guest hosts a monthly national radio show TRUTHTALK on http://www.conscioustalk.net/
Cartoon courtesy of Tom Toles / Washington Post
ONLY THE TRUTH IS REVOLUTIONARY