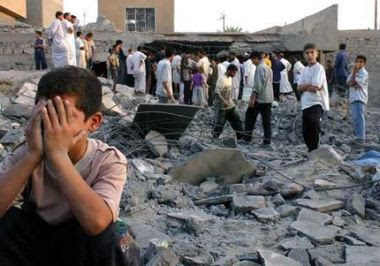 Iraq is America's Gaza and, like Gaza, it cries for justice to a world which would rather ignore its plight as well as America and Great Britain's role in this murderous error of judgement . Our karmic debt, like Israels with Gaza , is immeasurable: Allen L Roland

The occupation of Iraq is still going on, and the other war to which it is inextricably bound, in Afghanistan, is still going terribly wrong. As Carl Younge writes in The Guardian ~ " Attacking Iraq was the most defining personal political choice of the decade and, ethically speaking, not a remotely tough call. The fact that it was illegal adds judicial finality to a moment of moral clarity; but even within the law, it would have been wrong. The ramifications were not only predictable but predicted. Hundreds of thousands murdered, even more displaced, the unleashing of sectarian violence. Getting that wrong speaks to a major, murderous error of judgment."
http://stopwar.org.uk/content/view/1979/1/

Let's make this crystal clear ~ The Bush/Blair illegal war against Iraq was the willful planned destruction of a civilization and the same consciousness is obviously at work in the Obama/Patraeus ongoing dismemberment of Afghanistan.

As James Petras points out in his August, 2009 article THE DESTRUCTION OF A CIVILIZATION ~ " The sustained bloody purge of Iraq under US occupation resulted in killing 1.3 million Iraqi civilians during the first seven years after Bush invaded in March 2003 ...The militarist strategy of conquest and occupation of Iraq was designed to establish a long-term colonial military presence in the form of strategic military bases with a significant and sustained contingent of colonial military advisors and combat units. The Iraq war was driven by an influencial group of neo-conservative and neo-liberal ideologues with strong ties to Israel. They viewed the success of the Iraq war ( by success they meant the total dismemberment of the country ) as the first ' domino' in a series of wars to ' re-colonize' the MIddle East .. Conflagating Israeli regional hegemonic ambitions with the US imperial interests , the neo-conservatives and their neo-liberal fellow travelers in the Democratic party first backed President bush and later President Obama in their escalation of the wars against Afghanistan and Pakistan." http://www.informationclearinghouse.info/article233342.htm

The cost of this ongoing destruction is staggering ~ not just in dollars but in the intellectual cost of the peak assassination campaigns of 2006 and 2007. Atleast 210 lawyers and judges have been assassinated since the 2003 invasion. As Petras points out ~ " the raw data on the Iraqi academics, scientists and professionals assassinated by the US and allied occupation forces and the militias and shadowy forces they control is drawn from a list published by Pakistan Daily news ( www.daily.pk ) on November 26,2008. Obviously this list makes for very uncomfortable reading into the the reality of systematic elimination of intellectuals in Iraq under the meat-grinder of US occupation."

Here's the current state of Iraq according to SFGate.com but note these figures are very similar to occupied Gaza.

Health: Iraq's child mortality rate has increased by 150% since 1990, when U.N. sanctions were first imposed.

Education: By 2008, only 50% of primary school-age children were attending class, down from 80% in 2005, and approximately 1,500 children were known to be held in detention facilities.

Children: In 2007, there were 5 million Iraqi orphans~ according to government officials.

Water: 70% of Iraqis do not have access to potable water.

Jobs: Unemployment is as high as 50% officially, 70% unofficially.

Sanitation: 80% of Iraqis do not have access to effective sanitation.

The US has not only destroyed a modern Arab Civilization in Iraq but has also created an inhuman concentration camp, similar to Gaza, in the process. Our karmic debt is immeasurable and it is written on the faces and hearts of millions of refugees who will not forget or forgive either America or our partners for this crime ~ Great Britain and, of course, our silent partner Israel with its own immeasurable karmic debt in Gaza.