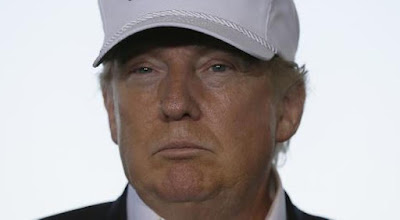 The Donald with Attitude

I used to think that America had achieved the pinnacle of H.L.Mencken’s famous quote about the eventual election of a moron with the disputed election of George W Bush but that was just a rung above the growing possibility of a President Trump. Donald Trump represents the last desperate hope of an American electorate who have been left out of the political process and have lost respect for our Oligarchy ~ so in their powerless dilemma, many have turned to a billionaire huckster who will gleefully voice their fears and concerns while creating a grade D political reality show which sadly has become American politics: Allen L Roland, PhD

“As democracy is perfected, the office of president represents, more and more closely, the inner soul of the people. On some great and glorious day the plain folks of the land will reach their heart’s desire at last and the White House will be adorned by a downright moron.” – H.L. Mencken (1880 – 1956)

On August 28th, 2015 I posted an Article on Veterans Today entitled America Deserves Donald Trump and now almost nine months later , he is about to become the Standard bearer for the Republican Party in the 2016 Presidential election. See article ~ http://www.veteranstoday.com/2015/07/28/america-deserves-donald-trump/

The Donald is now the living embodiment of American Exceptionalism in all its blatant glory and unless we reverse Citizens United, the public is reduced to voices in the wind. In the past,  as their frustrations mounted, they supported and voted for candidates that were almost directly opposed to what they deeply felt ~ and they obviously settled for mediocracy and rule by the Oligarchy ~ while seething and gnashing their teeth in the background.


As Mencken predicted, the people do not need to gnash their teeth any longer for a true champion of their frustrations has arrived in the form of a downright moron with the slogan of Make America Great Again.


Many, including myself, felt we had reached rock bottom with the election of George W Bush who immediately led us into our illegal war with Iraq and the loss and displacement of millions of Iraqi lives as well as over 6000 American servicemen and countless wounded in action ~ which we are still paying for.


We thought the bar could not be lowered any further when then Alaska Governor Sarah Palin was formally nominated for vice president at the 2008 Republican National Convention ~ but that was just a prelude for 2016.

ENTER THE DONALD / FUELED BY THE MEDIA

Amy Goodman (Democracy Now) explains how the major media is complicit in dumbing down our political process as well as marginalizing any true discussion of important issues and ruining our elections ~ as well as creating Donald Trump.

But perhaps media driven egoist Trump may well survive the growing satire and public abuse and play an important role in the upcoming 2016 Presidential Primaries as Michael Jensen predicted in the Standard Democrat in July of 2015 ~ or, as Mencken eluded ~ does Trump instead represent the true Heart's desire or Death wish of the American people who have given up hope in our political process.


“Six months ago, by way of example, Donald Trump was not on anyone’s radar screen. Six months ago the polls had Jeb Bush, Marco Rubio and Scott Walker ~ with a side of Ted Cruz ~ as the recipe for Republican victory.


And rest assured, six months from now there will be yet another scenario that will surely change from today’s snapshot.


I strongly suspect Trump has little or no chance of receiving the GOP nomination. He’ll spend some of his fortune, that’s for sure.


Trump is today’s oddity and the lightening rod on the campaign trail.


But the Trump momentum is easy to understand.


Trump consistently says what many Americans feel and he says it bluntly – which is refreshing in the world of politics.


Trump says illegal immigration will unravel the fabric of our society. He’s right. .


There is nothing politically correct about Donald Trump.


And right now, I honestly think the American public is sick and tired of political correctness.


What’s really fascinating about the Trump candidacy is that despite massive and unprecedented efforts by the liberal national media to paint him as a clown, Trump keeps rolling on and making an impressive showing in virtually all polls.


That must surely have the liberals scratching their heads for an answer.


As I said, I think Trump is somewhat a flash in the pan; a popular guy in our reality television world.


But there is one major benefit to the Trump campaign.


Because of his success thus far, he is forcing the other GOP candidates to talk about the important issues and perhaps slant their opinions in a different direction.


And here is my ultimate dream.


I would love to see Trump and Hillary on the stage debating one day. He would eat her alive and throw the bones to the dogs.

As I said last year, a dull politically correct 2016 Presidential Primary season has suddenly come to life with the appearance of the Donald and Bernie Sanders but despite his enormous ego and overbearing attitude, Trump may just, along with Sanders, help bring this election back to the issues the people really care about (and the Oligarchy ignores).

Perhaps the 2016 presidential election is really an important opportunity to seize and embrace change ~ Justin Raimondo (AntiWar.com) rightfully calls it the Trump Test;

"The Trump movement is different: it is massive, and it is capable of winning. That’s what has the Establishment in such a panic that they are considering denying Trump the nomination and bringing in a candidate on a “white horse” to steal the GOP from the Trumpians. If that happens, the system will be shaken to its very foundations, its very legitimacy in doubt – a perfect storm as far as libertarians are concerned.


But there is more to it than that. If we step back from the daily news cycle, and consider the larger significance of the Trump phenomenon, the meaning of it all is unmistakable: we haven’t seen anything like this in American politics – not ever. Revolution is in the air. The oligarchy is tottering. The American people are waking up, and rising up – and those who try to ignore it or disdain it as mere “populism” will be left behind."   See article ~
http://original.antiwar.com/justin/2016/04/28/the-trump-test

We're seemingly heading this summer for a contested Democratic and Republican Convention and this is a good thing ~ for out of this seeming chaos and confusion may come some sense of direction and order.

However, there can be little doubt the American people are waking up and it's about time. As the Sander's movement continues to be ignored by the main stream press ~ there is a  growing possibility of a faceoff between two entitled members of the establishment and the same social club (Trump/Clinton). And bare this in mind ~ the Clintons and Trumps are good friends ~ could it be that Trump is creating his current political role, similar to a professional wrestling villain, in order to be the foil for the woman he desperately wants to be president ~ after all, he has donated to many of her campaigns and she came to his most recent wedding.


Nothing would surprise me regarding the Clintons in their quest for money and power particularly in this election ~ as has already been seen in New York's election day voting irregularities.

PLEASE NOTE: If you're a registered Independent in California, you must request a crossover ballot and vote as a Democrat in order to vote for Bernie Sanders in the Presidential Primary on June 7th.


The Presidency is the ultimate deal for the Donald and that's how he is approaching his candidacy ~ win at any cost and deal and negotiate later ~ which explains his win-at-any-cost allegiance with the Clintons.


"His first 100 days would be riveting,” said Ari Fleischer, a former press secretary for President George W. Bush. “The question would be whether he is capable of downshifting from the hot rhetoric of his campaign to the serious business of building a presidency based on sound judgment and necessary coalition building.”


Mr. Fleischer said it was possible that Mr. Trump would make the adjustment, given his frequent comments about negotiating with Democrats and Republicans to reach compromises.


“That side of him intrigues me,” Mr. Fleischer said. “He keeps alluding to how well he gets along with people. It’s almost like Trump is playing a shrewd game. Tough campaigner today. Great deal maker later.” He added, “  Of course, if he wins he’ll have some level of strength and momentum akin to a mandate. That would help.”

Of course, this reality show election may once again marginalize the people and main street issues but it could also focus attention on the excesses and abuse of power by the tottering oligarchy (or the big club) and bring into sharper focus the wise words of the late George Carlin regarding the power of the establishment and who really owns America ~ "The real owners (of America) are the big wealthy business interests that control things and make all the decisions ... The politicians are put there to give you the idea that you have freedom of choice. ... They're not interested in that. ... It's a big club, and you're not in it."See video ~ https://www.youtube.com/watch?v=i5dBZDSSky0\


Heart centered spiritual consultant and advisor Allen L Roland can be contacted at allen@allenroland.com Allen is also a lecturer and writer who shares a weekly political and social commentary on his web log and website allenroland.com. He is also featured columnist on Veterans Today and is a featured guest on many radio and Television programs.