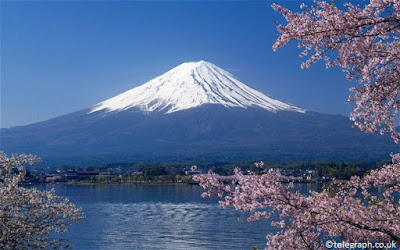 Fuji the magnificent empowers all in its spiritual glow

President Obama will visit Japan in late May for a Group of Seven summit but will enjoy an incredible opportunity to earn his 2009 Nobel Peace Prize by visiting Hiroshima and Nagasaki. He must visit with some of the survivors and then offer sincere condolences with the promise to the world that we must never allow our national aims or differences to reach the point where the only answer is nuclear war: Allen L Roland, PhD

To experience Mount Fuji, which I have as a carrier based Navy high Altitude Interceptor in the U.S. Navy, is to glimpse the soul of Japan for its presence and mystique envelopes the country and anyone who irreverently invades its sacred space will pay the price ~ as I did on a night mission from NAF Atsugi, Japan.

It was an incredible night for flying at Atsugi airbase in Japan and I was eager to experience Mt Fuji close up in my high altitude interceptor as I taxied into position for a night launch in my F3H Demon.

I had diverted from my home, the USS Ranger, the night before because of a clogged deck and was enjoying my brief respite at Atsugi, NAF (with its fabulous officers club) before returning to the carrier.

As I roared down the runway, I set my sights on Fuji whose presence majestically dominated the area and lay directly ahead of me in the darkening night sky ~ I would challenge her majesty with my mighty silver stallion, I foolishly thought to myself.

Within a few moments I was there and as I roared over her crest, I cut in my afterburner, did a slow roll and defiantly thundered away into the gathering night sky.

It did not take long for Fuji to teach me a well-deserved lesson for within a few moments all my instruments were dead, I had lost all my navigational bearings and soon became essentially lost over the North Pacific Sea.

Of course, Fuji's immense magnetic mineral presence had rightfully disrupted all my instruments in my foolish act of defiance and I eventually ruefully accepted that I was lost, radioed Mayday and was eventually vectored back to NAF Atsugi ~ but to this day I have never forgotten Fuji's lesson of the need for respect and humility particularly when possessing great individual power.

With that lesson in mind, I would hope that President Obama, as the leader of the world's greatest nuclear power, would exercise great respect, humility and empathy for the loss of innocent lives of both Americans and Japanese during World War 2 ~ which eventually lead to the unleashing of this horrific nuclear weapon as well as the means to destroy mankind.


The word is out.


You will visit Hiroshima in May.


Visiting Hiroshima is an opportunity to lead the way back
from the brink.


Take three gifts to the world on your journey: your courage,
your humanity, and a proposal to end the insanity.


Offer to convene the nuclear nine to negotiate a treaty
to eliminate nuclear weapons.


Set the world back on course.


Do it for the survivors.


And for children everywhere."

Hiroshima, Japan, in September 1945, a month after the detonation of an atomic bomb. Credit / Stanley Troutman/Associated Press

I was eleven years old when I felt and learned of the Atomic bomb being dropped on Hiroshima ~ I was sitting on a small hill at the Thompson Club which was directly across the street from my home in Nahant, Massachusetts.

I was waiting for my twin brother to join me so we could play baseball together ~ I suddenly felt a deep wave of despair which seemed somewhat strange and then my twin brother running toward me broke my reverie .

Bobby was telling me that we had dropped an Atomic bomb on Japan and destroyed Hiroshima and then I connected that deep moment of despair ~ I was empathetically feeling the pain of those thousands of Japanese civilians who were obliterated in a blinding flash of searing heat and unbearable pain in just a few seconds, vaporized into nothingness ~ a universal shock wave of inhumanity that touched our common universal soul connection as human beings ~ our world had suddenly changed and part of me felt and knew it deeply.

The question now is ~ how can we expect the United States government, which since Hiroshima has been responsible for the deaths of millions of people in Korea and Vietnam ~ and, over the past quarter century, throughout the Middle East ~ to apologize for mass murder when it continues to practice it to this day through regime change, drone assassinations and its ongoing war on and of terror.

Krieger is absolutely correct ~ President Obama will need the gifts of great courage and a sense of genuine humanity to bring us back from the brink of nuclear extinction and I would hope he deeply senses the importance of this moment.

President Obama, earn your 2009 Nobel Peace Prize by seizing that moment in Hiroshima, Japan by speaking from your heart and telling the world that this nuclear devastation must not be allowed to happen again as well as offer a concrete proposal to eliminate nuclear weapons forever ~ which must begin with ourselves.


"An eye for an eye only ends up making the whole world blind." Mahatma Gandhi