THE UNSEEN ENEMY PTSD CONTINUES TO TAKE ITS TOLL 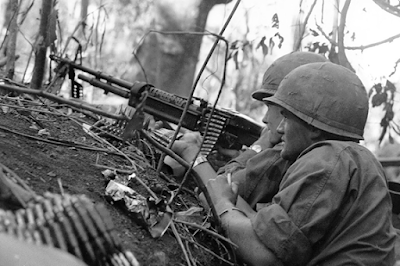 U.S. Army Soldiers on Patrol in Vietnam in 1966 / Wikimedia

During the Vietnam War, as well as subsequent Wars, the U.S. military plied its servicemen with speed, steroids, and painkillers to help them handle extended combat ~ but this symptom oriented approach has only delayed the ravages of PTSD as well as the true extent of soul damage and suicidal ideation that occurs as the result of drug enhanced active duty combat: Allen L Roland, PhD

"The Greek epics aren’t just war stories. They’re stories about the relationships between men, and the terror they felt in combat. Odysseus comes back from war and his own wife doesn’t recognize him. This is a very human thing:"  Denver Mills, USN retired speaking of PTSD


Listen to the words of  Vietnam combat veteran, Denver Mills, who became a Veteran Center adjustment director under the  U.S. Dept. of Veterans Affairs, writing about the psychic toll of active duty combat;


"At first, we only saw Vietnam vets, but then, lo and behold, we discovered that WWII and Korea vets had the same problems. Of course, we knew that all along. After WWII and Korea, it was “suck it up and don’t talk about it,” but we know that a large number of WWII veterans either committed suicide or died from high-risk behaviors.


Now imagine you’ve had a whole bunch of people get killed around you, day after day. Afterward, you’re still amped up on the adrenaline and endorphins, and you just want to calm down and stay away from people and keep your mind off what you’ve been through. So you do things, like you work 80 hours a week, then come home and go down in the basement and drink ’til you pass out. Or maybe go from woman to woman to woman, or you get into drugs and alcohol. That’s the avoidance phase.


And it’s not just American veterans. It’s veterans throughout history. There’s a great book called Achilles in Vietnam written by a psychiatrist and professor of classical literature. He compared The Iliad and The Odyssey to the experience of vets he’d worked with.


The Greek epics aren’t just war stories. They’re stories about the relationships between men, and the terror they felt in combat. Odysseus comes back from war and his own wife doesn’t recognize him. This is a very human thing.


I guess I’ve been struggling, myself, for quite a while, but I think my work with other veterans helped me take care of my own issues in many ways. Helping other people is a healthy thing to do."


I am indebted to fellow Navy veteran Denver Mills, who has not only helped many veterans but also personally helped me set up and fund a special veteran's Healing the Wounded Heart transformation group with combat veterans in 2010 ~ based on my book Radical Therapy, Surrender to Love and Heal Yourself in Seven Sessions (not Seven Years).


Denver was curious about my Unified Field of love, joy and soul consciousness that I wrote was beneath our deepest fears ~ but was amazed by the transformations of many of the combat veterans who went beneath their pain and drank from that spring of joy in these Band of Brother's groups and whose lives were changed forever.


The Band of Brothers Healing the wounded heart transformation program was supervised by Adjustment counselor Sal Ueda and graduated well over 100 veterans in over five years ~ some of which are now in service counseling other veterans. See Veterans Today Post ~ http://www.veteranstoday.com/2015/11/24/concord-vet-center-paves-way-for-needed-heart-centered-approach-to-vet-rehabilitation/

Research has found that 3.2 percent of soldiers arriving in Vietnam were heavy amphetamine users; however, after one year of deployment, this rate rose to 5.2 percent. In short, the administration of stimulants by the military contributed to the spread of drug habits that sometimes had tragic consequences ~ because amphetamine, as many veterans claimed, increased aggression as well as alertness. Some remembered that when the effect of speed faded away, they were so irritated that they felt like shooting “children in the streets.”


In addition, a recent SFVA study strongly suggests that soldiers who experience killing experiences are twice as likely to attempt suicide ~ which strongly supports the reality of soul damage as a contributing factor for veteran’s suicide as well as the obvious need for a proven heart centered approach toward veteran rehabilitation.  See my report ~ http://www.veteranstoday.com/2012/04/25/rising-vets-suicides-heart-centered-approach-needed/


By and large, writes David Grossman in his book On Killing, Vietnam was “the first war in which the forces of modern pharmacology were directed to empower the battlefield soldier.” For the first time in military history, the prescription of potent antipsychotic drugs like chlorpromazine, manufactured by GlaxoSmithKline under the brand name Thorazine, became routine.


This outcome, however, was short-sighted. By merely alleviating soldiers’ symptoms, antipsychotic medicines and narcotics brought immediate but temporary relief. Drugs taken without proper psychotherapy only assuage, suppress, or freeze the problems that remain deeply embedded in the psyche. Years later, those problems can explode unexpectedly with multiplied force ~ as they most certainly did with our rising veteran suicide rate.

Intoxicants do not eliminate the causes of stress. Instead, observes Grossman, they do “what insulin does for a diabetic: They treat the symptoms, but the disease is still there.”

In her book Flashback, Penny Coleman quotes a military psychologist who says that If drugs are given while the stressor is still being experienced, they will arrest or supersede the development  of effective coping mechanisms, resulting in an increase in the long-term trauma from the stress.

What happened in Vietnam is the moral equivalent of giving a soldier a local anesthetic for a gunshot wound and then sending him back into combat. See Transcend story ~  https://www.transcend.org/tms/2016/04/the-drugs-that-built-a-super-soldier/


Citizens Commission on Human Rights (CCHR) says that rather than continually send heartfelt condolences to the families of veterans suicide victims, it is time for lawmakers to investigate the connection between prescription psychiatric drugs and violence, including suicide. 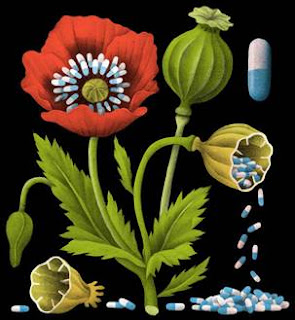 " The military long has been aware of the increasing number of military suicides and last August released the findings of the Department of Defense (DOD) 2013 Study title "Risk Factors Associated With Suicide in Current and Former US Military Personnel.


While psychiatric drug information did not make it onto the questionnaire, CCHR explains that there is ample data to support an investigation into the increasing number of psychotropic drugs prescribed to military personnel and the part the drugs may play in the recurring violence."

Here are some important findings from the report ~

·            # From 2005 to 2011, the Department of Defense and the Veterans Administration increased their prescriptions of psychiatric drugs by nearly seven times. That's more than thirty times faster than the civilian rate.

·            # Thirty-seven percent of recent war veterans are being diagnosed with PTSD and 80 percent of those are prescribed a psychiatric drug.


Colonel Bart Billings ~ a clinical psychologist with a  34 year military career in both active and reserves ~ speaks out regarding the growing evidence of psychiatric drugs, over- medication, suicide and violence ~ as well as the VA's refusal to deal with the situation. See this important must see 8 minute video and article ~ http://www.prweb.com/releases/2014/04/prweb11735195.html


But there is a demonstrated Heart Centered approach to PTSD which I have both facilitated over the past five years as well as mentored the past year as a heart centered volunteer consultant ~ a program which concentrates on gratefulness and forgiveness and focuses on self-healing versus medication.


The power and truth of a heart centered approach to self-healing has withstood ridicule and then opposition within the VA and medical pharmaceutical community ~ but it is now fast approaching the stage where its acceptance and value are self-evident.

“
What happens when people open their hearts ~ They get better.”  ~ Haruki Murakami, Norwegian Wood