THE EMPIRE IS CRUMBLING / BRING IN THE CLOWNS 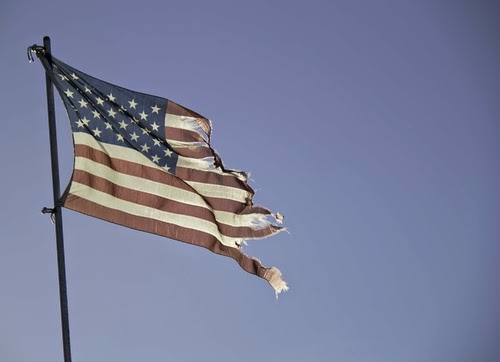 The last refuge of a scoundrel is patriotism and this Independence Day 2014 as we celebrate our independence with parades, picnics and fireworks ~ let us not forget the clowns and scoundrels who cloak themselves in patriotism and represent the worst of America. There is no more despised clown or scoundrel who still represents the worst of American values, yet continues to cloak himself in patriotism, than Darth Vader himself, Dick Cheney ~ the behind the scenes architect of the 9/11 attacks and cover up, the promoter of the illegal war with Iraq for Oil resources, the instigator of illegal rendition, Guantanamo as well as the torture memos and whose self-described travels on the dark side have left America's crumbling Empire morally barren and spiritually lost: Allen L Roland

Dick Cheney is like a deadly and now dormant vampire who lives in the darkness and can only be truly eliminated by a wooden stake of truth driven into his treasonous heart of denial whereas the truth of 9/11 will finally be revealed as well as Cheney's role in America's greatest act of treason ~ a 9/11 cover up which is still being protected and ignored by the Obama administration.

First, the crumbling Empire. Only Chris Hedges truly captures the true ghoulish face of a fading American Empire as seen in the current disintegration of Iraq ~ "The disintegration of Iraq is irreversible. At best, the Kurds, the Shiites and the Sunnis will carve out antagonistic enclaves. At worst, there will be a protracted civil war. This is what we have bequeathed to Iraq. The spread of our military through the region has inflamed jihadists across the Arab world. The resulting conflicts will continue until we end our occupation of the Middle East. The callous slaughter we deliver is no different from the callous slaughter we receive. Our jihadists ~ George W. Bush, Dick Cheney, Paul Wolfowitz, Donald Rumsfeld, Richard Perle, Thomas Friedman and Tommy Franks ~ who assured us that swift and overwhelming force in Iraq would transform the Middle East into an American outpost of progress, are no less demented than the jihadists approaching Baghdad. These two groups of killers mirror each other. This is what we have spawned. And this is what we deserve"  See article ~ http://www.truthdig.com/report/page2/the_ghoulish_face_of_empire_20140623

Next, the barely living symbol and still performing clown of this crumbling Circus or Empire ~ Dick Cheney. 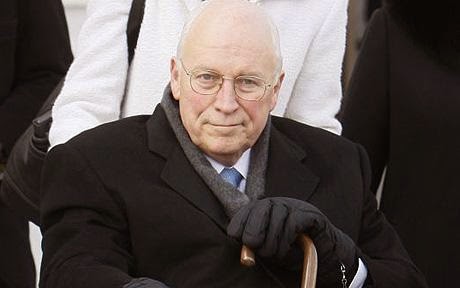 Suggested Caption: Obama's on board with the cover-up, now it's time to write my memoirs.

Dick Cheney's recent words of projection speak for themselves ~ " Rarely has a U.S. President been so wrong about so much at the expense of so many. Too many times to count, Mr. Obama has told us he is 'ending' the wars in Iraq and Afghanistan ~ as though wishing is made it so." June 17,2014 op-ed with his daughter Liz in the Wall Street Journal.

Now let's review Dick Cheney's fabrications and wishful thinking during the concerted Cheney led effort to sell our illegal war and occupation of Iraq from 2003 to 2005.

"Simply stated, there is no doubt that Saddam Hussein now has weapons of mass destruction." August 22, 2002

"We believe he has reconstituted nuclear weapons"  March 16, 2003

"In Iraq, a ruthless dictator cultivated weapons of mass destruction and the means to deliver them. He gave support to terrorists, has an established relationship with al Qaeda, and his regime is no more."  Nov 7, 2003

" What we did in Iraq was exactly the right thing to do. If I had it to recommend all over again, I would recommend exactly the same course of action."  Oct 5, 2004

Thom Hartmann briefly describes the true cost of the Iraq war ~ "The Iraq War was the single biggest foreign policy disaster in recent - or maybe even all - of American history. It cost the country around $4 trillion dollars, killed hundreds of thousands, if not millions of innocent civilians, left 4,500 Americans dead, and turned what was once one of the more developed countries in the Arab World into a slaughterhouse."

The obvious question is why would Dick Cheney obviously lie and deceive both the public and everyone around himself in both the run up to and aftermath of our illegal occupation of Iraq?

The equally obvious answer is Dick Cheney sees himself as a patriot and was and is still committed to defending the lie of Iraq because if he didn't ~ he would have to defend his and the Bush/Cheney administration's role in the orchestration of the needed Pearl Harbor event or the Bigger lie of 9/11 which led to the attack of Iraq. Cheney's best defense has always been his belief in a strong offense which explains his current blatant denial of the facts regarding Iraq.

And here's the 11 minute YouTube must see documentary of the Cheney, Bush and the PNAC Criminal Conspiracy to invade Iraq which obviously was preceded by the PNAC announced need for a new Pearl Harbor ~ which lo and behold became 9/11 within a year and the now infamous and thoroughly discredited official 9/11 story. See video ~ https://www.youtube.com/watch?v=egqqCYSfV2k

And finally, in the spirit of this Independence Day ~ here's the world's shortest fireworks display when over 7000 fireworks went off at the same time because of a computer glitch  http://digg.com/video/happy-4th-america-heres-7-000-fireworks-going-off-at-the-same-time?


Mark Twain correctly wrote ~ Patriotism is supporting your country all the time, and your government when it deserves it ~ and our government most certainly does not deserve to be supported when it comes to using a highly suspicious 9/11 attack as a justification for the illegal war and occupation of Iraq.