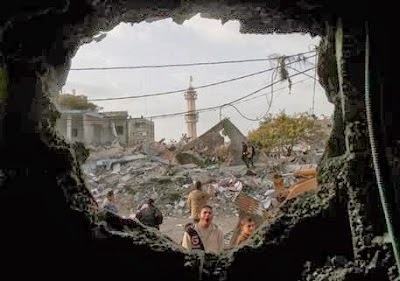 The myth of Israel's right to Palestine as well as their illegal and brutal U.S. supported Israeli occupation of the West Bank and Gaza has finally been exposed and shattered by a Zionist Generals' son, Miko Peled ~ who reveals in his book that Israel's rabid Zionists are very similar to America's rabid neo-conservatives and that the only hope for the region depends on a bottom up American public outcry for human rights and democracy to replace the current Israel Garrison state of subjugation and apartheid: Allen L Roland, Ph.D 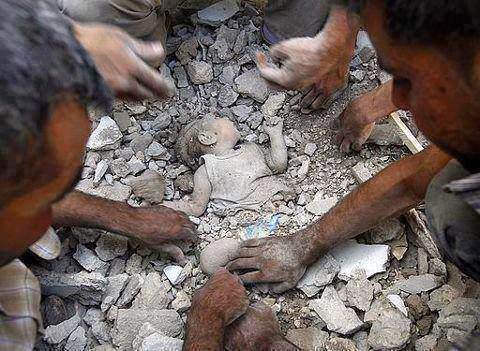 On Wednesday, Gaza's health ministry, which keeps casualty figures, said 209 Palestinians had been killed and 1,560 were injured as the fighting continued for a ninth day. At least 39 children and 24 women were among the dead, officials said. In actuality, 80% of the killed and injured are civilians. Remember, there is no Israeli Iron Dome to protect Palestinian civilians and children ~ this is not war, it's genocide.


Below is a photograph of the anguished wail of a grieving father of one of the four young boys who was killed by an Israeli strike in Gaza on Wednesday. The boys, all cousins and under the age of 12, had been playing soccer on the beach when the Israelis attack occurred. The man’s picture, by photographer Hosam Salem, was taken during the boys’ funeral. 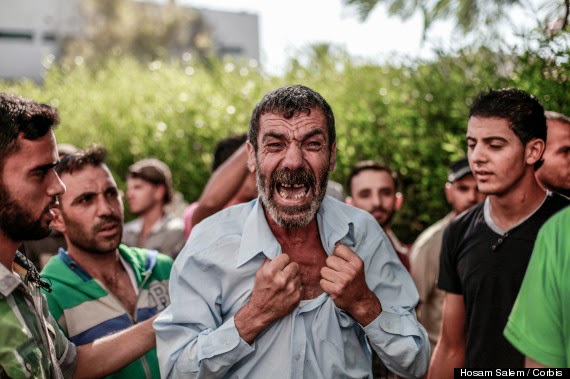 The open sore of  man's brutal inhumanity to man continues unabated in Gaza despite the cries of many of the world's humanitarian leaders to end this Zionist and American sanctioned slaughter of occupied and oppressed civilians and their rightful defenders. This ongoing atrocity is paying a psychic toll on the world's conscience and can no longer go on unabated without severe consequences.


In December of 2013, I summarized my outraged feelings which also included a 4 minute video clip of former president Jimmy Carter commenting on Hard Ball regarding the truth about Israel. See article and video ~ http://www.veteransnewsnow.com/2013/12/18/the-worlds-long-festering-truth-israel-is-an-illegal-garrison-state/


Here's Carter's Hardball 5 minute TV appearance by itself ~ and note how it is abruptly ended as Carter's talking points take effect: https://www.youtube.com/watch?v=uvtC_qzHVM4&feature=player_embedded


But now we have an honest Israeli Jew, Miko Peled, the son of a Zionist General, telling the Real Truth about Israel and the ravages of unchecked Zionism.


Miko Peled was born in Jerusalem into a famous and influential Israeli Zionist family. His father was a famous General in the Israeli Army, of which Miko also served his time. When Miko's niece was killed by Palestinian suicide bombers, you may have expected the family to put Palestinians at fault, but surprisingly they blamed the state of Israel, and their violent torturing and persecution for driving people to such sadness that they would take their own lives.

Through his father's deep knowledge of the Israeli war of terror, together with his own research, Miko Peled peals away the myths surrounding the Israel and Palestine situation, and delivers a truth so damning that many Jews and Israel supporters will not be able to bear it. He reveals facts such as the original expelled Jews are not the ones returning, and they are not their descendants either, covers the double standards regarding the right of return, which doesn't apply to Palestinians, and dispels the myth that there has been a conflict for ages by producing proof that it was peaceful up until 1947 when Israel launched their illegal attacks.

Miko is just one of the many modern day Jews against Zionism and the state of Israel, and with the information he delivers in this astounding talk, it is not difficult to see why more and more Jews are rejecting Zionism and calling for the dismantling of Israel. It is a true eye-opener for anyone who has for too long been blinded by the fake misinformation given by the mainstream media, and the truths come straight from the heartland where he has spent many years documenting the real story.


The last 20 minutes of this riveting 65 minute video are spontaneous questions and answers where Miko shares that the current preoccupation of Israel with Iran is a smokescreen to cover up apartheid with Palestine, that the only law that applies to Palestinians is Israeli military law and that only a bottom up American demand for human rights and democracy can change or break the Israeli garrison apartheid state and its AIPAC supporters.


As Margaret Kimberley correctly writes in ICH ~ "Of all the partners in international crime in existence right now, the United States and Israel are the worst. Along with their less powerful cohorts like Saudi Arabia they have instigated occupations and carnage on a mass scale. Yet while one hand washes the other, it isn’t always clear who controls whom. Israel uses the political and economic muscle of its supporters to keep American politicians in line, but it also doesn’t have to work very hard to find a receptive ear in Washington."

In a time of universal deceit ~ telling the truth is a revolutionary act: George Orwell.