DARK SHADOW OF CHERNOBYL TOUCHES FUKUSHIMA / IT'S TIME FOR ACTION 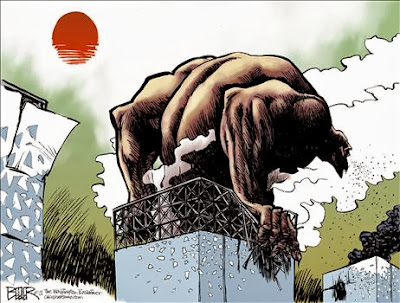 To fully understand the current folly and cover-up of Fukushima, you must understand the same folly, cover-up and consequences of Chernobyl in 1987 and recognize that this time we may not outlive the consequences. It's time now for populist direct action and Germany is a stunning blueprint for the success of that process: Allen L Roland

I thought Chernobyl was bad, until I saw this: Here's a time lapse map of the 2053 nuclear explosions that have taken place between 1945 to1998. It starts slowly but skip to 1962 and the buildup becomes overwhelming before the world seemingly comes to its senses ~ 7 minute video.
http://memolition.com/2013/10/16/time-lapse-map-of-every-nuclear-explosion-ever-on-earth/

But now let's deal with the Chernobyl nuclear disaster of 1987 when a simple experiment to see if the steam turbines could power the coolant pumps, if there was a loss of power, led quickly to a nuclear disaster on the night of April 26, 1986 ~ that nearly poisoned the world with a dose of lethal radiation.
Seconds From Disaster - Meltdown at Chernobyl http://www.youtube.com/watch?v=lyqpVOxmw8s

Today, we have Arnie Gundersen putting up a new video on the upcoming fuel rod removal at the ongoing radiation disaster of Fukushima ~ and it cuts to the core of the worldwide radiation danger we now face at Fukushima. EPCO has produced a reassuring short video describing how the fuel removal process is supposed to go, mixing animation and documentary footage to soothe away any viewer’s worries. Arnie Gunderson calls it a “fantasy cartoon” and shows excerpts from the TEPCO production followed by his own explanations of how TEPCO is misleading the world / 17 minute video http://www.nukefree.org/fairewinds-video-fukushima-4-rod-removal

The nuclear power industry is an accident waiting to happen and only populist direct action, as demonstrated in Germany, can free a world that is now being held hostage by the nuclear power global corporate elite.

Meanwhile, in the partly evacuated Fukushima Prefecture, local officials are confirming an increase in thyroid cancer in children. The rate is more than 7 times higher than for the general population and reflects a similar pattern experienced around Chernobyl after the accident there.

A key to Germany’s anti-nuclear success is the persistent and uncompromising environmental movement that has used civil resistance and protest as well as independent electoral politics to achieve its goals. Popular Resistance.org  just featured a must read article on What The US Can Learn From Germany’s Stunning Environmental Movement.

Excerpt:  "Anti-nuclear protests, a staple of German environmentalism since the 1970s, had been heating up in the years preceding Fukushima. In early 2010, a full year before the tragedy, 120,000 Germans had formed a 75-mile human chain between two active nuclear plants. The day after the Fukushima tsunami hit, tens of thousands formed a similar chain across parts of southern Germany. Within three days of the meltdown, some 110,000 demonstrators had staged nearly 500 events in as many towns across the country. By the end of the month, massive rallies had engulfed Berlin, Hamburg, Cologne and Munich. National uproar continued as March led to April, and it was only in late May, after 25,000 protesters had converged on their party headquarters, that Chancellor Merkel and her government agreed to a ban."  See article: http://www.popularresistance.org/what-the-us-can-learn-from-germany/