WAR IS HELL AND DON'T FORGET IT 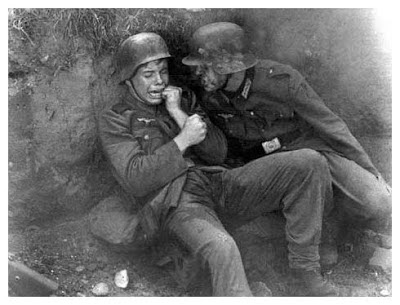 Here's a normal human being, just a young German soldier really, in ‘war’ ~ terrified and seemingly broken by it. He probably saw his best friend's head blown off right next to him in the trench. Look at his hands, clenching in the panic of a child, his bladder releasing in the terror of war as an officer screams at him to toughen up. As you see, war is not natural; it is not ‘normal’ for human beings to slaughter each other at the bidding of psychopathic leaders ~ yet generations later, psychopathic leaders send boys to ‘other’ lands to kill and die; all for lies and for their own profit.

War is hell and don't forget it. As we honor the dead on Memorial Day 2013 and place flags on the grave sites ~ let us not forget the true agony of War as well as the massive lies that have sent millions of once innocent boys and girls to their graves: Allen L Roland


I borrowed this photo from an excellent article by Anart Grey, Editor Sott.net, who correctly writes" Nothing has changed for soldiers since World War II, only now we try to drug away the terror, or train it away with video games, propaganda and even more lies." See article ~ http://www.veteranstoday.com/2012/11/17/a-radical-remedy-for-veterans-humanity-and-truth/

War is big business ~ and it operates in the
service of big business regardless of the lives that are sacrificed.

No one understands that better than the "cream" that rises to the top in the Pentagon ~ like Col Lawrence Wilkerson, chief of staff for former United States Secretary of State Colin Powell.
They know exactly what they're doing and who they're serving ~ and
for sure it's not "Truth, Justice and the American Way."
8 minute Video:
http://www.brasschecktv.com/page/4189.html

This Memorial Day, instead of celebrating the start of summer, take a few minutes to watch Mark Twain's brilliant War Prayer, on video, and reflect on the true costs of our illegal and perpetual wars against humanity ~ and in particular the War on Terror. 10 minute video http://www.youtube.com/watch?v=sVYIRbmxHpc

“I confess without shame that I am tired and sick of war. Its glory is all moonshine. It is only those who have neither heard the shrieks and groans of the wounded, who cry aloud for more blood, more vengeance, more desolation. War is Hell.” ~ Civil War Union General William Tecumseh Sherman who orchestrated the infamous scorched earth policy that terrorized the Confederacy in his “March to the Sea” in 1864.