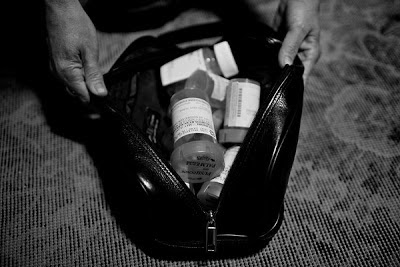 The unsaid issue behind the rising vet suicide rate is shame based guilt regarding killing experiences, which violence inducing psychotropic drugs can only numb ~ but my heart centered counseling program in California can and has successfully facilitated self-healing, self-forgiveness and inner transformation, and all without drugs: Dr Allen L Roland

No one really talks about the psychic damage that combat veterans feel when they take someone's life, regardless of the military situation ~ but the effect is real and usually manifests itself as shame based guilt whereas the innate deep need to love and accept love is quite often permanently disabled.

No amount of psychotropic drugs can ease that psychic burden and even Gen. Peter Chiarelli, the Army’s No. 2 officer, who has long been an advocate for soldiers suffering from the invisible wounds of war ~ such as PTSD and TBI ~ also advocates the need for other alternative approaches ~ " I want to understand what drugs we should use to treat these symptoms, if we should use any drugs at all. I want to look into alternative pain management. We are finding there are other ways to handle pain that are more effective and allow a person to feel a lot better than throwing a bagful of drugs at them.”  See article ~ http://www.govexec.com/defense/2011/06/armys-no-2-officer-worries-about-wars-toll-on-mental-health/34236/

A bag filled with violence inducing psychotropic drugs are not the answer for treating our returning veterans, especially since for every US soldier killed this year, at least 25 veterans commit suicide. The US military has lost more troops to suicide than to combat for over two years in a row and a better cause versus symptom based understanding of combat-related risk factors for suicide is now critical.

In 2007, the US Department of Defense issued $3 billion in contracts for bulk pharmaceutical purchases, many of which are option periods from an original award and that number is significantly higher now ~ we’re talking big money here!

Here’s one of those drugs in that bag. After the recent massacre of 16 Afghan civilians by a U.S. soldier, as well as scores of military and veteran suicides and homicides, more light is being shed on the military’s zombie potion, Mefloquine (Lariam).
Mefloquine is an anti-malaria drug, invented by the military that has been known for some time to have severe psychiatric side effects including psychotic behavior, paranoia and hallucinations. The drug has been implicated in numerous suicides and homicides, including deaths in the U.S. military as well as Peace Corps. With so many other anti-malarial medications available, one has to wonder why the military continues to distribute Mefloquine (Lariam) at all.

So let’s take a closer look at the bagful of drugs (Care of big Pharma) that are currently being thrown at combat veterans as well as their adverse effects regarding the likelihood to be associated with violence versus other drugs ~ and then read a new SFVA study that indicates the psychic damage of veterans who experience killing experiences.

A recent study published in the Public Library of Science online journal (PloS One @ www.plosone.org) by the Institute for Safe Medication Practices (ISMP @ www.ismp.org) listed the top 31 prescription drugs that can cause violent or aggressive behavior in those consuming them.

A new SFVA study strongly suggests that soldiers who experience killing experiences are twice as likely to attempt suicide ~ which strongly supports the reality of soul damage as a contributing factor for the rising rate of veteran’s suicide as well as the obvious need for a proven heart centered approach toward veteran rehabilitation.

This important April 13, 2012 research study abstract was entitled ~ KILLING IN COMBAT MAY BE INDEPENDENTLY ASSOCIATED WITH SUICIDAL IDEATION ~ and the SFVA released the following abstract:

BACKGROUND:
The United States military has lost more troops to suicide than to combat for the second year in a row and better understanding combat-related risk factors for suicide is critical. We examined the association of killing and suicide among war veterans after accounting for PTSD, depression, and substance use disorders.
METHODS:
We utilized a cross-sectional, retrospective, nationally representative sample of Vietnam veterans from the National Vietnam Veterans Readjustment Study (NVVRS). In order to perform a more in depth analysis, we utilized a subsample of these data, the NVVRS Clinical Interview Sample (CIS), which is representative of 1.3 million veterans who were eligible for the clinical interview by virtue of living in proximity to an interview site, located within 28 standard metropolitan regions throughout the United States.
RESULTS:
Veterans who had higher killing experiences had twice the odds of suicidal ideation, compared to those with lower or no killing experiences, and substance use disorders were each associated with higher odds of suicidal ideation. Endorsement of suicide attempts was most strongly associated with PTSD.
CONCLUSIONS:
Killing experiences are not routinely examined when assessing suicide risk. Our findings have important implications for conducting suicide risk assessments in veterans of war. See Report:

I have long felt and have now proved that PTSD is quite often Post Traumatic Heart Disorder for a common symptom of Post-Traumatic Stress Disorder is the inability to give or receive love ~ which can obviously apply to non-veterans who have also suffered significant loss or emotional childhood and/or adult psychic pain.

I have also clearly demonstrated that only after the heart is touched can true self-healing occur for only then does the client (veterans or otherwise) truly want to heal.  Using the premise that what is deepest within us is love (not anger) and utilizing an action oriented approach to face and go through their heart felt fears ~ these veterans, soon discover that beneath their pain, anger and shame is not only love and joy but most importantly their true authentic self.

The purpose then of the Healing the Wounded Heart Workshops is to penetrate the grey zone of guilt, aloneness and unworthiness, that many combat War Veterans diagnosed with Post-traumatic Stress Disorder (PTSD) experience, and this is done within a supportive group setting through heart centered self-exploration, group sharing, guided visualization and action oriented homework ~ where love and joy eventually overcome fear and separation.

But this is also the same approach I individually use with non-veterans who have suffered psychic loss and have emotionally closed their hearts and are suffering post traumatic heart disorder whereas they are unable to give or receive love.  The miracle of heart centered counseling is the power of love and gratefulness ~ for when your heart is awakened through love and gratefulness, you not only want to heal but you also know or at least sense your next step in the self-healing process. See article ~  http://www.veteranstoday.com/2013/02/12/miracle-of-heart-centered-counseling-is-self-healing/

Here are two participants comments from their workshop evaluation;  "I have progressed farther in the workshop’s 8 weeks than I have in 25 years of on-and off private therapy. I've been given a very informative look at myself. I understand much more about my own experiences. So many answers to so many questions. I feel alive!  Gaining a different perspective on life helps me to see my true self. It's nice to feel love and a sense of self-worth"

"My quick temper and bouts with anger are gone. My dreams are no longer violent and I have not flown out of bed since the workshop. I am able to fall asleep and remain asleep. My relationships with my wife and family have improved immensely. The comradeship that grew with the other participants was wonderful. I feel very strongly that the “ Healing The wounded Heart “ workshop should be added to the VA’s inventory of most effective tools used in re-adjustment counseling to combat the life destroying effects of PTSD.”

Testimony to the Effectiveness of Dr. Allen Roland’s Heart Based Counseling

"I was fortunate to have been selected among veterans undergoing readjustment counseling to participate in Dr. Allen Roland’s Healing the Wounded Heart Workshop No. 5 in 2011.  Dr. Roland acted as our guide in leading us through a series of incredible exercises that enabled each participant to reestablish contact with long forgotten feelings of joy and despair that we experienced during key events throughout our lives. During this process, we didn’t analyze events.  We experienced them emotionally. In doing so, we were able to return to a state of soul consciousness where we were able to open our hearts and express and share our deepest feelings with others.  Each and every member of our ‘Band of Brother No. 5’ reached a turning point at a different time as the program progressed.  Upon reaching this place of choice, each of us was able to resolve past resentments that we may have harbored towards others and took full responsibility for our lives.  Personally, I can only describe the changes I underwent as the opening of my heart to others and the reconnection of my consciousness to my soul.  As a result, my quick temper and bouts with anger that frequently lead to physical altercations with others have dissolved.  My formerly recurring violent and intense nightmares have dissipated and I sleep through the night.  I now interact socially with others comfortably and accept them with an open heart. Following numerous break ups over the years, my relationship with my loving wife is renewed and lasting.  Two years following Dr. Allen Roland’s heart based counseling, I’m happy and at peace."

If combat veterans are responding positively to these once a week eight week action oriented heart centered workshops ~ it’s time for the VA to open the door to alternative healing methodologies which the rest of the country are already acknowledging, supporting and experiencing.

In that regard, here's a testimonials from one of my recent non-veteran individual Skype clients who completed this same heart centered counseling work in just seven sessions;

"Skype sessions with Allen Roland are an accelerated, comfortable and effective method for getting to the root of, and solving your problems. I reached a point in my life where I no longer enjoyed things that were once fulfilling, and came so easily to me. I had no understanding as to why actions that I've made hundreds of times now seemed impossible and insurmountable. By simply logging onto my computer (in my living room), something I do countless times a day, instead of continuing on a path of despair, I connected with a compassionate, thoughtful, and experienced coach who guided me from grief back to a state of well-being, progress, and accomplishment. I suffered from psychosomatic issues that prevented me from doing what I love, and with Allen's online help, I am now more excited than I have been in a long time, to follow my passion, and do things that make me happy. I highly recommend Skype sessions with Allen, as they are convenient, life-changing, and rewarding."

Hopefully, the VA will soon shift its veteran’s treatment focus from just symptom management ( through drugs) and coping toward the real impact of trauma experiences on the human soul - the detachment or quite often further disconnection from one's inner spirituality, well being and above all the capacity to give and receive love.

There is no true healing without love, and gratitude is the quickest path to unlocking the door of a closed heart.

Allen L Roland is a practicing psychotherapist, author and lecturer who also shares a daily political and social commentary on his web log and website allenroland.com He also guest hosts a monthly national radio show TRUTHTALK on www.conscioustalk.net
Posted by Allen L Roland, Ph.D at 12:14 PM